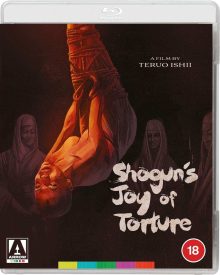 Set during the Endo period of Japan’s turbulent history, Shogun’s Joy of Torture sees a young judge reminiscing about three very different cases he was involved with, hence making this an anthology film, showcasing a number of different stories loosely tied together by an umbrella narrative; in this case our observer leafing through past government records.

The first story sees a young woman, Mitsu, being put into a horrible position whereby her older brother (and keeper) is injured at work, forcing her to succumb to the whims of his lecherous boss in order to be able to pay for the expensive medicine that’s healing her brother. To make matters worse, her brother, Shinzu, after realising that his boss has got in there first and has de-flowered his sister, reveals that he’s been harbouring lustful thoughts about her for years and wants her for himself and wastes little time in getting his injured leg over too. When the boss comes to visit and rapes Mitsu in front of her brother, Shinzu loses it and later attempts suicide. On finding him slowly bleeding out, Mitzu takes the knife from his throat, but is seen by the boss and reported as having murdered her brother, for which she is sentenced to death, and that’s just the half of it! So, next time you think that you’re having a bad day, just think about poor Mitsu!

The second part sees a new abbess arrive at a rural monastery that keeps the nuns and monks separate, but still working together, as and when required. The abbess, Reiho, initially seems to be quite a sympathetic character, but quickly shows her true colours when she falls for a monk that she spies on having an illicit tryst with his sexy nun girlfriend in a nearby wood. She confronts him, persuades him to make love to her, in return for his silence, but, when he won’t leave his chosen partner for her, she has both he and his intended tortured as punishment. She initially has his girlfriend dunked into a barrel of aggressive fish, called loaches, which have a nasty habit of swimming where the sun doesn’t shine and then, to make matters even worse she shoves hot chillies up the nun’s lady garden – and that’s just for starters! I won’t reveal what she does with a hot poker, but you get the picture… However, the abbess, and her nasty habits (sorry!), is finally curtailed when word gets out and the Shogun’s retinue turn up to settle her hash in a suitably gruesome, but more official way.

And finally, we get to witness the story of an expert tattooist, Horichi, who slighted by his lord, takes it upon himself to produce his best work yet, one depicting his shogun’s joy of torture. He kidnaps a young woman so that he can use her as his living canvas, and then requests that his lord let him spectate the next time he’s torturing anyone so that he can see what real pain looks like… The shogun agrees and lets him observe his ‘interrogation’ of some shipwrecked Westerners (all nubile young women) who he ritually humiliates in his dungeon. To put it mildly the Shogun has created his own version of Hell in his basement! Not quite satisfied, the tattoo artist requests one last session with his lordship as he wants to record the shogun’s own facial expressions, as he’s going about his grisly work, which doesn’t quite end quite as you might expect!

As you can imagine Shogun’s Joy of Torture isn’t a film for all the family (Disney won’t be remaking it anytime soon!) or even for all horror fans for that matter – it had me wincing several times and I’m pretty desensitised to this kind of stuff. And, even more disturbing, is the fact that director/writer Teruo Ishii researched his topic thoroughly and most of the tortures that he depicts on screen actually happened back in the 17th Century. It never fails to surprise me just how inhuman man can be to his fellow man if given the opportunity or motive; truly brutal…

So, is Shogun worth watching? Well, it’s well made and acted with excellent period details, including the costumes, being very authentic. Plus, it is interesting from a cultural and historical point of view, but I’m not sure I’d class it as ‘entertaining’, unless, of course, you ‘get off’ on seeing lots of nubile young women being whipped with sugar cane poles and having unpleasant things shoved up pink places where the sun don’t shine!

This is definitely a film for Japanese cinema enthusiasts that are more into the depraved end of Japanese cinema, than for your more general horror fan or art-house crowd member.

Arrow Films is distributing Shogun’s Joy of Torture on Blu-ray. There are a variety of extras that come with this release, which include:

Bind, Torture, Kill (25.16 mins) – Film historian Jasper Sharp explores the erotic-gore torture subgenre that was popular during the late sixties and early seventies in Japan. Sharp discusses the various subgenres of exploitation films that came out around the same time as Shogun’s Joy of Torture, including Pink films and Roman-Porno films. There’s also a nice array of vintage posters used to illustrate this presentation too.

Original trailer (2.40 mins) – This focuses mostly on the nubile women on display and even mentions one’s 40” bust as a selling point!

Image gallery – 19 production stills and posters from the film 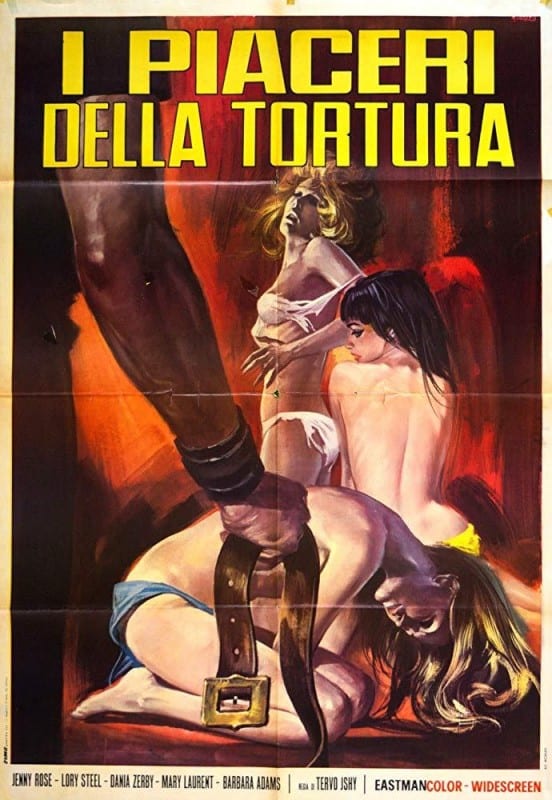