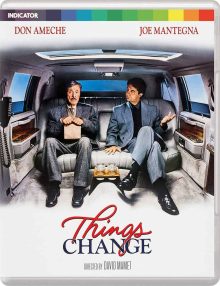 After first making waves on the theatre scene, before finding acclaim as a screenwriter with his work on The Verdict and The Untouchables, David Mamet made the step up to direct his first film (which he also wrote of course) in 1987, with House of Games. This was also very successful, both critically and commercially, allowing Mamet to move swiftly on to his next project without much trouble.

His following film was Things Change. Once again, it garnered decent reviews as well as picking up a joint best actor award at the Venice Film Festival for stars Don Ameche and Joe Mantegna. It made more money at the box office than House of Games too. However, thirty-odd years later, Things Change isn’t as well-remembered as Mamet’s directorial debut or his most famous writing credit, Glengarry Glen Ross.

Indicator though, as they often do, are championing this forgotten film from a much-loved filmmaker. I got my hands on a copy of their forthcoming Blu-ray release and my thoughts follow. 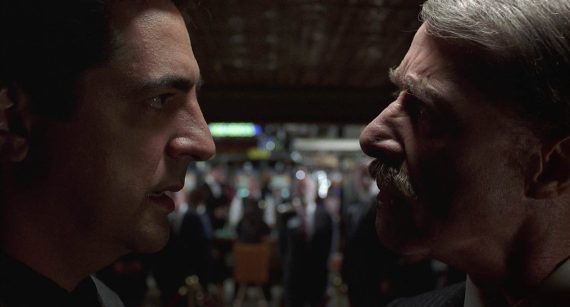 Things Change sees Ameche play Gino, an ageing shoe-shiner who’s approached by a couple of mob bosses (Ricky Jay and Mike Nussbaum) with a proposition. Because Gino looks remarkably similar to one of their ‘family’, they want him to take the blame for a murder that the gangster committed. The old man will go to jail of course, but the mob will pay him handsomely for his time.

Gino agrees, keen to be able to buy the fishing boat he’s always dreamed of. So, he’s put up in a grotty little hotel room for a couple of days while they wait for the right moment for him to make his confession.

Keeping an eye on Gino is Jerry (Mantegna), a low-level mobster currently on ‘probation’ for botching his last job. This could be his chance to get back in the business but, feeling sorry for Gino, he takes the shoe-shiner off to Lake Tahoe for the weekend, as a last hurrah before his long jail stint.

Unfortunately, Jerry immediately bumps into another low-level gangster, Billy Drake (William H. Macy), at Lake Tahoe and, to avoid him asking questions, makes out that Gino is actually an important ‘old country’ head of the family and they’re keeping his visit on a low profile. This plan backfires, as Drake insists on driving them to the Galaxy Hotel, where he gets them bumped up to the most exclusive suite they have, with all expenses covered. 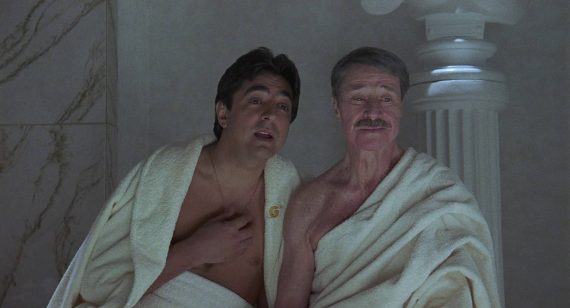 Gino and Jerry make the most of these luxuries, whilst trying their best to stay undetected. This becomes nigh on impossible when Joseph ‘Don Giuseppe’ Vincent (Robert Prosky), who had been told about the ‘important visitor’ by Drake, insists that they visit him so he can get close to this supposedly high-ranking mystery don.

David Mamet’s work is famous for its profanity-filled dialogue and complex, twist-laden plots, so Things Change came as a bit of a surprise to me. Though it has a few nice plot turns here and there, it’s a rather low-key, leisurely-paced affair overall. It’s PG-rated too, so gone are the swear-heavy monologues. In fact, dialogue is a little more minimal here, particularly when it comes to Gino, who doesn’t seem to speak a great deal of English and ambles along, letting Jerry and later Don Giuseppe guide him.

The script was co-written by Shel Silverstein, which might explain its slightly different tone and style to most of Mamet’s work, though Mantegna’s character feels more familiar. The actor, along with much of the rest of the cast and crew, was part of Mamet’s ‘company’ who worked with him on House of Games, as well as many of his other stage and later screen productions. The only core person that wasn’t and never became a Mamet ‘regular’ was Ameche. This fact works very well for the character as he’s supposed to be lost and out of place among his gangster surroundings. 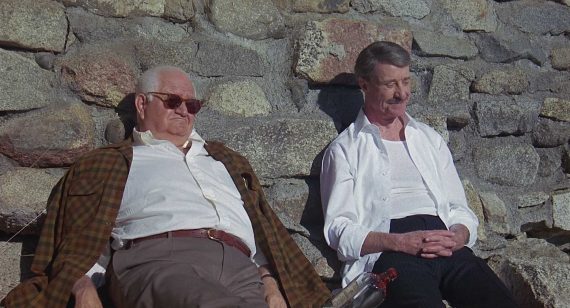 Ameche does a great job with the role too. He’d been working in Hollywood since the 30s, but was seeing a renewed stardom due to popular turns in Cocoon (for which he won an Oscar) and Trading Places. His work here is much more subtle than in those films, delivering an understated but charming performance as the quiet nobody that gets accidentally ushered into a glamorous world he’d never yet experienced through his long life.

Mantegna is excellent too, perfectly channelling the sympathy and frustration of the character who longs to move up a level or two in his career but feels for the others that are held back like him. Together, the central pair strike an unlikely but warmly believable partnership. From Mantegna’s accounts in the special features, he got on very well with Ameche off-camera and their friendship remained for the next few years, before Ameche died in 1993.

Things Chage is a gently funny film, rather than an out-and-out comedy, but there are some genuinely amusing scenes and lines. Everything is tinged with sadness though, as you’re constantly aware that Gino can’t enjoy this lap of luxury for much longer and, chances are, he might not even live through his forthcoming jail stint. 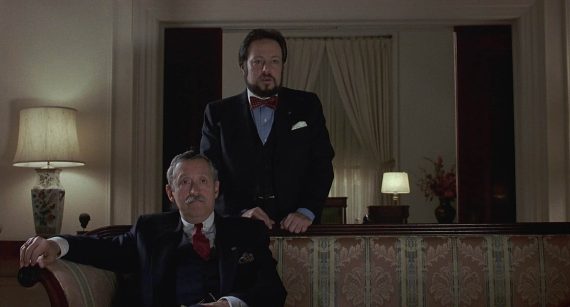 Also aiding this air of melancholy is the film’s score. Alaric Jans provides beautiful music that clearly pays homage to the ‘old country’, without feeling like a parody. It helps add a touching poignancy to the comic goings-on in the film.

If I were to pick flaws, I’d say the finale is a little contrived. In particular, there’s a neatly tied up conclusion that I wasn’t convinced holds water. It’s done visually though, so there’s no way to know for sure exactly what took place, but you can make a good guess.

The gentle, melancholic tone and pace to Things Change might also prove underwhelming to some, but I found it charming from start to finish. Bolstered by a sharp but understated script and performances that work likewise, it’s a low-key gem.

Things Change is out on 22nd March on Blu-Ray in the UK, released by Indicator. The picture quality is pristine. The image is sharp, natural and damage-free. The images accompanying this review are screengrabs from the disc, to give you an idea. Audio is robust too.

Mamet discusses his early career in his interview as well as sharing a few memories from making Things Change. He’s an engaging speaker so it’s a solid piece.

I enjoyed the interview with Alaric Rokko too. He’s worked with Mamet on a number of films and actually knew him from school. In the interview, he tells us about his introduction to music, development as a composer and work with Mamet.

Mantegna speaks fondly of Mamet and the cast, imparting numerous anecdotes about them all. It’s a warm and entertaining interview.

Rob Deering’s piece is only short but gives an affectionate, yet thoughtful, analysis of the film that was very much in line with what I was getting from it too. In fact, it bothered me that half of the notes I made matched what he said as it’ll look like I simply wrote my review based on his interview!

On a side note, there are some clips of House of Games shown in the extras, so I’m crossing my fingers this is a sign that Indicator might have that in the pipeline.

As usual, the booklet is excellent. It contains an interesting essay on the film, an on-set report, a refreshingly honest but still warm interview with Ameche and some period reviews.

So, a decent set of features to complement a fine film. Recommended.