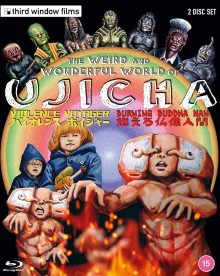 Ujicha, whose pen name was taken from a famous green tea originating from his hometown, originally studied design at university and, due to a passion for cinema, decided to make a film for his final project. He tried to make a live-action film but struggled to pull it off. So, he thought why not incorporate his skills as a graphic designer into making films.

He toyed with creating standard animation but didn’t get on with that either. Soon, however, he came across a TV adaptation of Kazuo Umezu’s manga ‘Cat Eyed Boy’ and the music video for ‘Mononoke Dance’ by Denki Groove. These were done in a style known as ‘geki-mation’, where paper cutout puppets were used to animate characters, rather than frame-by-frame cel animation or CGI. He loved this lo-fi approach and decided to learn how to do it himself.

Ujicha made a few short films first, then, later, he was approached by a figurine producer called Leo Anzai, who had made a figure that blended together a Buddha and a girl, and was thinking of turning this concept into a feature film. Anzai was a senior at the same university as Ujicha and came across his geki-mation work so got in touch. Ujicha didn’t do much prep, but got straight into it. With him doing most of the design and art work himself, as well as shooting the film, it took a long time. Longer than expected after the shorts he’d made. 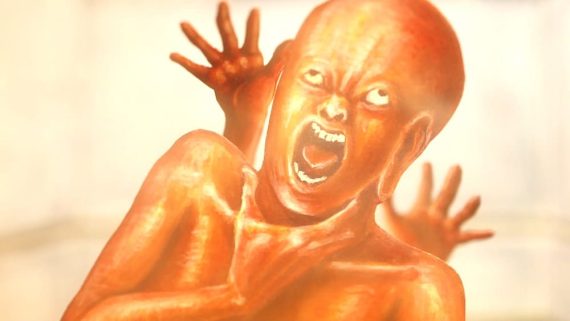 However, the hard work paid off, as the resulting film, The Burning Buddha Man, played at several genre festivals to reasonable acclaim. It was popular enough for Ujicha to be able to follow the film up with another geki-mation, this time with a better budget allowing for more careful pre-production.

The follow-up was Violence Voyager, which again impressed the cult festival crowd, even if it hardly broke any box-office records. Suitably impressed with Ujicha’s work, Third Window Films got their hands on his two features, alongside a few of his shorts, and are releasing them together on Blu-ray in a suitably eye-catching box set, entitled ‘The Weird and Wonderful World of Ujicha’. The cover art and some trailers I saw certainly grabbed my attention, so I got hold of a screener to review the collection and my thoughts follow. 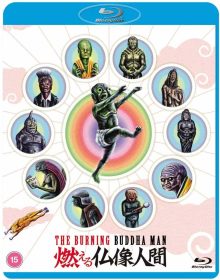 Burning Buddha Man takes place in Kyoto, where tragedy strikes young Beniko after her parents are killed during the theft of a Buddha statue from her family temple. Enju, an elderly man who claims to be a friend of the family, takes Beniko under his wing. He tells her that the statue was stolen by a group called Seaddattha, who are stealing Buddha’s all over the region using a special teleportation ray, which her parents were caught in during the raid.

Enju brings Beniko home to his temple to live with him. There, Beniko discovers a world of mutated creatures that are part-Buddha, part-human. She works to find out who’s behind all this and put a stop to their reign of terror, as well as find out if her parents may still be alive, trapped together inside a living Buddha statue.

I enjoyed this quite a lot. The film is bizarre beyond belief but its story is told effectively enough to make sense and hold your interest. It races along at quite a pace too, jumping straight into the action and rarely taking time to breathe.

The handmade, paper-puppet approach is also surprisingly effective. Though the movement of characters looks a bit naff (which might add to the charm, depending on your tastes), Ujicha puts a lot of effort into making sure the mise-en-scene is as cinematic as possible. There’s a great use of depth and movement to bring shots alive. The camerawork and puppeteering can be a little wobbly but it’s still a visual treat in its own strange way. 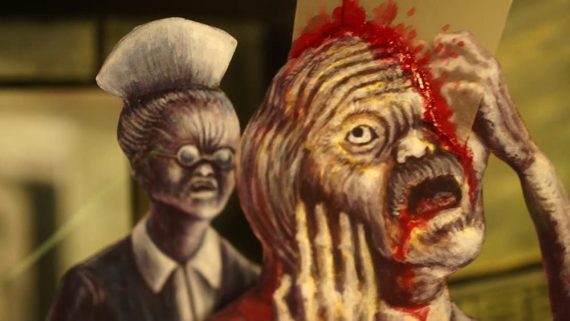 The paper puppets and backgrounds are enhanced by some added practical effects too. Real smoke, fire and other tactile elements add texture.

I also love the art style. I want to say it’s impressionistic, with its noticeable brush work, but my knowledge of fine art is limited. Regardless, colours are bold and the painted characters and backgrounds are detailed without looking photorealistic or bland. The character design is grotesque, with the film largely populated by strange creatures, though even the human characters look a little ‘off’. There’s quite a bit of sexual imagery in the designs too and various gooey substances are added at appropriate moments to up the ick factor.

With a bold, homemade, yet cinematic aesthetic and unique art style, Ujicha’s work is one-of-a-kind. His bizarre and imaginative ideas are also kept within a relatively straightforward but enjoyable and fast-paced revenge plot too, preventing the film from simply being a mess of wacky ideas that hinge on its unusual style. It won’t be to all tastes, but if you’ve got an open mind and a penchant for the strange and disgusting, you’d be advised to give this a shot. 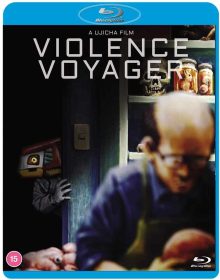 Violence Voyager sees two friends, Bobby (Aoi Yûki) and Akkun head up a mountain close to their home, as they believe the route will take them on a shortcut to the house of another friend of theirs who moved away. En route, they visit strange Old Man Lucky-Monkey (Kellen Goff), who Akkun likes to spend time with. The Old Man warns them not to go up the mountain, but the boys don’t listen to him and head off.

They never make it to their friend’s house though as, on the way, they discover what looks like an abandoned theme park called Violence Voyager. A man greets them and tells them the park is very much still open and lets them enter for free.

The park seems fun at first, offering the boys a chance to roleplay as soldiers fighting alien-robots that have taken over the world. However, when they discover a very real threat in the park and find other children there struggling to survive, their lives are quickly thrown in great danger. 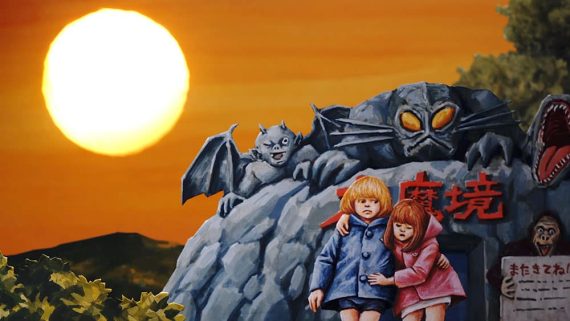 As my synopsis suggests, Ujicha’s follow-up to The Burning Buddha Man has more of a Spielberg/Amblin vibe to its set up and, in his commentary, the writer-director confirms this influence. However, once the story gets going, his twisted imagination takes hold and dark and disturbing events and sick black humour are very much front and centre, like in his earlier film.

Violence Voyager is the stronger of the pair in my opinion. It has a slower pace, but this plays in the film’s favour, allowing for better character development and dramatic construction. I was much more invested in Bobby’s quest than I was in Beniko’s. There are even a couple of quite poignant moments, on top of several pretty disturbing ones.

Violence Voyager is also more slickly made than its predecessor, aided by its increased budget. It still utilises the lo-fi geki-mation style, but this time the camerawork is smoother and Ujicha experiments a little more with lighting and framing. There’s an increase in added practical elements like water, fire and gunge too, so it’s visually very impressive and makes a good case for geki-mation being more than just a quirky gimmick. 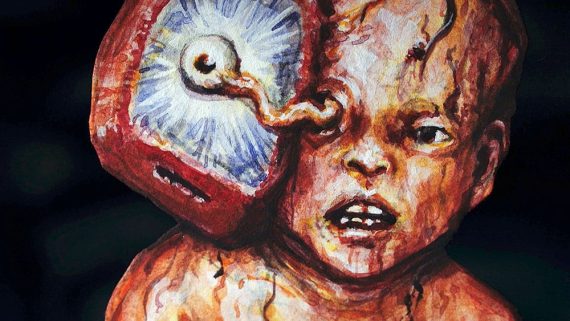 The voice cast is decent too, breathing life into the static paper characters. By working through a famous talent agency, Ujicha and his producer were able to get pretty much every name from their wishlist of actors. Their names probably don’t mean much to us in the west, but in the world of anime it’s supposedly quite an impressive ensemble.

Overall then, Violence Voyager is another gruesome, bizarre treat from Ujicha. More professionally produced and with more thought put into the drama, it’s the best of the two titles included in this set and helps me class it as highly recommended.

The Weird and Wonderful World of Ujicha is out 25th January on Blu-Ray in the UK, released by Third Window Films. The picture quality on both the feature films is excellent, with strong colours and crisp detail. The sound quality is solid too.

The commentary is very good. Ujicha is honest about some of the film’s shortcomings and his influences. His interview covers some of the same ground, but it’s nice to get a more refined discussion from him, filling you in on his background and approach to filmmaking.

The shorts are a welcome addition too. ‘Tempura’ is the strongest, though it’s very short, so feels more like a scene or teaser for a longer piece. ‘The Retnepac2’ seems to be quite an early short and is credited to Satoshi Okuda, which I assume is Ujicha’s real name or former pen name. It’s very rough around the edges, with far less impressive shooting techniques, ropey audio recording and a barely decipherable plot. ‘Space Yokai War’ is of a higher standard, though it’s still not as slick as the feature films and doesn’t make much sense. I liked its black and white VHS punk aesthetic though.

The teaser of Ujicha’s follow-up to Violence Voyager is very brief, so doesn’t give much away, but it got me excited purely through the knowledge that more films are on their way. Fingers crossed Third Window picks it up.