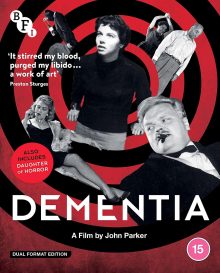 Dementia was originally shot back in 1953, produced and directed by John J Parker (though there are rumours that associate producer and actor Bruno Ve Sota was the actual director) and funded by his mother, Hazel H Parker, who ran a theatre chain in Oregon. John Parker tried to get the finished film shown in New York later that year, but the state film board rejected it 10 times, claiming it was “inhuman” and “indecent”, before outright banning the film.

Eventually, in 1955, after code restrictions had loosened a little, Dementia was screened, once, at an arthouse cinema, bizarrely playing alongside a documentary on Picasso. In the vein of William Castle’s later publicity stunts, members of the audience were required to take a ‘medical exam’ before the film, to prove they wouldn’t die of fear. The screening attracted little attention though, other than a couple of poor reviews, and the film went back into hiding.

Two years later though, B-movie producer Jack H Harris (of The Blob fame) bought the rights to the film, added narration from Johnny Carson sidekick Ed McMahon, made another couple of slight changes, and gave the film a new lease of life, rebranded as Daughter of Horror.

This wider release did poor business too, but it attained a level of interest among horror/cult-movie buffs over the years, aided largely by its use in a scene in The Blob in 1958. A following slowly grew through some British screenings when it was shown for the first time there in 1971 and later after it featured in a couple of cult movie books in the 1980s. 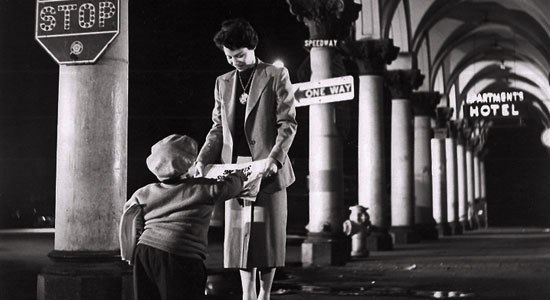 Although an obscure film that never received much of an audience, Dementia feels ahead of its time, paving the way for independent horror films with avant-garde leanings like Night Tide and Carnival of Souls, as well as feeling like a precursor to the work of David Lynch.

Recognising the film’s importance, the BFI are releasing Dementia on Dual Format Blu-ray and DVD, alongside Daughter of Horror and other valuable special features, to try and give the oddity another lease of life. Curious about the film myself, I got my hands on a screener and my thoughts follow.

Dementia sees Adrienne Barrett (Parker’s secretary, whose nightmare reportedly inspired the film) play ‘The Gamin’, a woman who seems to have murdered someone previously (she has a switchblade in her drawer that she looks at suggestively and we later see a newspaper headline about a ‘mysterious stabbing’). We see her hit the streets one night and get picked up by a rich, grotesque man (Bruno Ve Sota). Money exchanges hands between her and another man that set them up, suggesting she’s a prostitute or similar. 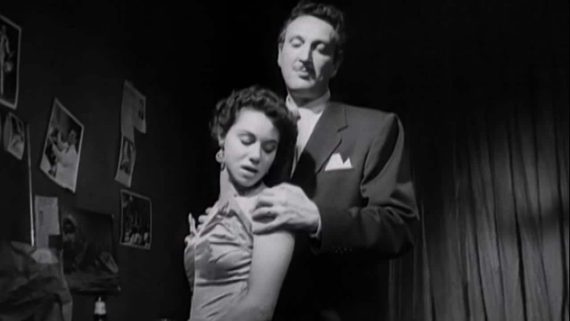 When the rich man’s sleazy ways and lack of interest in her get too much, she kills him with her switchblade and disappears back into the night, finding refuge in a jazz club. When she exits, however, she finds the rich man’s body on the floor, clutching her pendant. She desperately tries to get the necklace back and is forced to cut off the dead man’s had in order to do so, before running off. A police offer (played by Ben Roseman, another producer, who also appears as her father in a flashback) is following her though.

Dementia is a most unusual film, particularly for the era. Most notable is its lack of dialogue (which is why Daughter of Horror had a voiceover tacked on, to make it a little more marketable). Sound effects are fairly minimal too, so it has the feel of a true silent movie, though even cue cards are omitted here, making for a sense of unease you perhaps wouldn’t get, had the film contained dialogue or any other form of clear explanation.

Without any dialogue and minimal sound effects, the score has to do all the legwork and thankfully it’s wonderful, coming from avant-garde composer George Antheil, who worked on several film noirs, including In a Lonely Place. He blends his experimental stylings with a B-movie Hollywood sound, to create quite a bombastic but effectively unsettling soundtrack to the film. 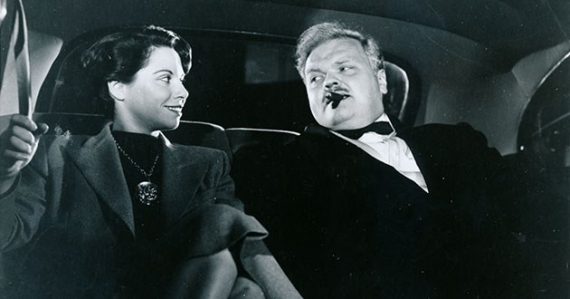 Also adding greatly to Dementia’s atmosphere is its cinematography. Shot on location in Venice, California (like A Touch of Evil a few years later), there’s a strong sense of urban atmosphere and a striking use of light and shadow, much in the noir vein (a genre that the film consistently blends with horror). There’s some fluid movement too and a few uncomfortably extreme close-ups used to great effect. It came as a great surprise then to discover the cinematographer was none other than William C. Thompson, the man who shot the majority of Edward D. Wood Jr’s most (in)famous features, including the notoriously terrible Plan 9 From Outer Space.

The film is quite interesting thematically too. I initially saw it as a somewhat feminist work. Our protagonist is female and every man we see in the film is a lecherous pig with no respect for the women in the film. Away from the ill-fated rich man, the first man we meet is getting arrested for beating his wife and a surreal flashback shows The Gamin’s father assault and shoot her mother. So The Gamin, in this sense, is a form of avenging angel against the cruel, unloving treatment of the men around her. However, different readings by Kat Ellinger on the film’s audio commentary and Ian Schultz in the enclosed booklet cast doubt on this feminist idea.

Ellinger comments on how The Gamin isn’t actually abused by the men in the film (though I’d argue the wife-beater at the start and the father’s actions suggest abuse is all around her and affecting her mental state), but rather she, and the other female presence in the film, a cleaner, are consistently ignored by men and that The Gamin’s vengeance seems to be due to the rich man not paying her any intention. Instead of engaging her in conversation or other activities, the rich man ogles another woman in the club they go to and ravenously digs into his food when back in his hotel room. Ellinger believes the film has greater value as a comment on cycles of violence though. 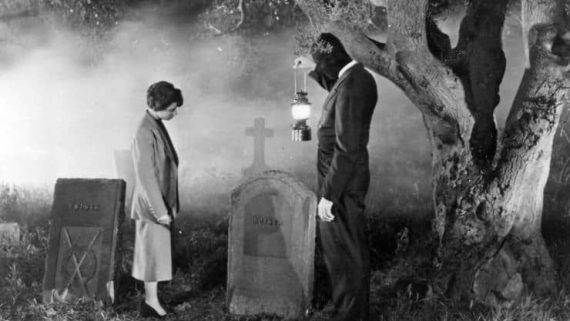 Schultz points to the fact that, although our protagonist is female and the men are cast in a bad light, The Gamin is clearly shown to be crazy and overly violent, so is difficult to view as a strong female character, representing women in general. If it is attempting to do that, it’s casting women in the unfavourable ‘hysterical woman’ mould.

Regardless of how you see its content and themes, Dementia is a short, sharp and still quite shocking film. A stylish tour-de-force that effectively fuses noir and horror conventions, its lack of dialogue, rather than mark it as old-fashioned, make it a daring experiment steeped in atmosphere and the visual tradition of cinema. It’s certainly well worthy of rediscovery.

Dementia will be released on 19th October on Dual Format Blu-Ray and DVD in the UK, released by the BFI. I watched the Blu-ray version. There’s some very minor damage and a slight wobble in places but for a long-forgotten film this looks great and a restoration comparison included on the disc shows how much of a notable improvement was made to the picture. There’s a bit of a crackle on the audio in spots but, again, considering the circumstances, the BFI have done a fine job.

– Daughter of Horror (1957): Dementia was picked up by producer Jack H Harris and re-released as Daughter of Horror in January 1957. Whilst also featuring music without dialogue, Harris made a number of edits and added narration by actor Ed McMahon
– Newly recorded audio commentary by film critic and editor-in-chief of Diabolique magazine, Kat Ellinger
– Alone with the Monsters (1958, 16 mins): a study of people’s unconscious cruelty to others, this bold experimental film was directed by Nazli Nour with cinematography by the great Walter Lassally
– Trailers from Hell: Joe Dante on Daughter of Horror (1957/2013, 2 mins)
– Before & After: restoring Dementia (2015, 3 mins): a series of short clips from Dementia that illustrate the work done by the Cohen Film Collection for their 2015 restoration
– Dementia trailer (2015)
– Daughter of Horror trailer (1957)
– Image gallery
– ***FIRST PRESSING ONLY*** Fully illustrated booklet with new essays by Ian Schultz and the BFI’s William Fowler and Vic Pratt

The Daughter of Horror version of the film is a welcome addition. The most notable change is the voice-over narration. This is hilariously over-baked, causing the film to feel much more trashy and exploitative, but, thankfully, it’s used quite sparingly. The print of this hasn’t been polished up as nicely either, which helps you appreciate the work the BFI did on the main feature.

Kat Ellinger’s commentary is fantastic. She digs into the unusual background of the film as well as offering some interesting analysis. She’s fast becoming one of my favourite commentators, so I’m happy to see her name crop up quite regularly these days.

The ‘Trailers From Hell’ featurette is short, but Joe Dante crams as many illuminating facts as he can into the 2 minutes he has, so it’s still worthwhile.

Alone with the Monsters is quite low-tech and the acting is a little ropey, but it contains some striking and occasionally disturbing imagery. Its lack of dialogue and unusual nature make it a suitable companion piece to Dementia.

The booklet is excellent, as always. The essays within it proved immeasurably useful in forming this review.

So, though the film is very short, the fine array of extra features help dismiss any doubt as to the value of this excellent release.