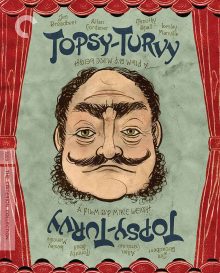 Topsy-Turvy marked the first time the acclaimed writer-director Mike Leigh made a period drama, turning his gaze from his usual working-class contemporary Britain setting to the pomp and splendour of the Victorian theatre, in particular the then immensely popular comic operas of Gilbert and Sullivan.

Despite this vastly different setting, Leigh envisioned the film as looking at his own work and that of other fellow filmmakers and theatre companies, throughout the ages. He stated in an interview that, “I’m not given to making films about filmmakers or artists, but I decided that it would be good to make a film about what we do, what we all go through.” Through presenting the immense amount of work, stress and drama that likely went into writing and putting on one of Gilbert and Sullivan’s audience-friendly “chocolate-box” productions, Leigh planned to show how he and his fellow artists “slave ourselves to death and go to hell and back creating profound trivia for the laughing public”.

That’s how the film plays out. It begins with the debut performance of Gilbert and Sullivan’s Princess Ida at their regular venue, the Savoy Theatre in London. The show performs poorly, in comparison to their previous work, partly due to a brutal heatwave but one review that angers Gilbert (Jim Broadbent) suggests that their work is growing repetitious and stale.

Sullivan (Allan Corduner) shares this belief and decrees that he will not write another comic opera with Gilbert for the Savoy. He wants to write a grand opera or symphony instead. The Savoy’s owner Richard D’Oyly Carte (Ron Cook) and his business manager Helen Lenoir (Wendy Nottingham) aren’t happy about this, as the pair are under contract with them, and they do their best to keep Sullivan on board. 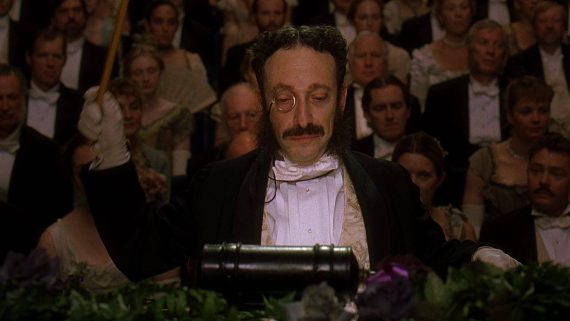 Gilbert, meanwhile, tries his best to come up with an original story and lyrics that will lure Sullivan back. His initial efforts are lacklustre, once again recycling his usual far-fetched narratives about magic potions and such. However, when his wife Lucy (Lesley Manville) drags him to see a Japanese exhibition in the city, Gilbert is inspired to write what will become one of the pair’s most beloved operas, The Mikado.

This comes at the middle of the film and the latter half concerns the production itself. We are taken through various stages of behind-the-scenes preparation as Gilbert desperately tries to keep details authentic to Japanese culture (despite the opera’s story itself having no bearing to Japanese life whatsoever). Various dramas come and go, with tempers flaring but work cracking on. We climax, of course, with the show itself, followed by an extended coda that makes a surprising tonal change and lets three of the story’s women, who were largely sidelined previously, take centre stage and close the curtains on a poignant note.

I must admit, I haven’t seen nearly enough of Leigh’s films. It took me a while to give them a chance, as I always thought they were typical ‘kitchen-sink dramas’, the like of which don’t appeal to me. However, when I finally popped my Mike Leigh cherry with Another Year, I fell in love with it. I soon after checked out Life is Sweet and greatly enjoyed that too. However, when it came to two of Leigh’s more recent period pieces, I was a little lukewarm. Though I appreciated much of Mr. Turner, I found it quite slow and I didn’t think much to Peterloo at all, feeling it was overly blunt and one-sided in its anti-establishment message. So, I came to Topsy-Turvy with some trepidation, it being another one of his more lavish period pieces. 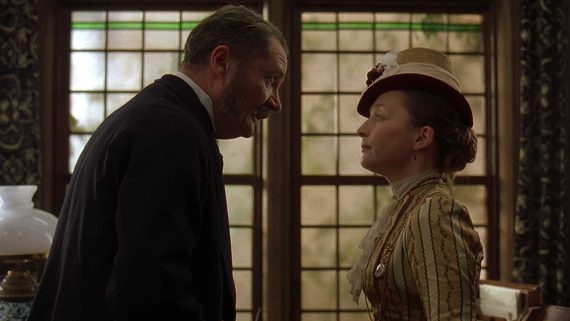 I needn’t have worried though, as I adored Topsy-Turvy. It helps that the film captures much of the good humour of Leigh’s contemporary-set work. There is great pleasure to be had in watching the huge cast of characters bicker and exchange banter during the production of the show. There are no contrived comic situations, but warmth and comedy come through the witty dialogue and enjoyable performances.

Speaking of which, this being a Mike Leigh film, the acting is astonishing. There are a huge number of characters and there is not a bad performance to be found among them. Leigh employed his usual technique of forming his script from extensive workshops and improvisations with the cast prior to production. This time around though, he got them to do extensive research into their real-life counterparts, to ensure authenticity and provide inspiration. Featuring numerous Leigh regulars, as well as a few ‘newbies’, there are countless memorable turns from even the briefest of appearances. For instance, Andy Serkis crops up once or twice in a wonderfully broad and highly physical (of course) role as the show’s choreographer. Timothy Spall is particularly good too, in a medium-sized supporting role as one of the highly-strung principle cast members. 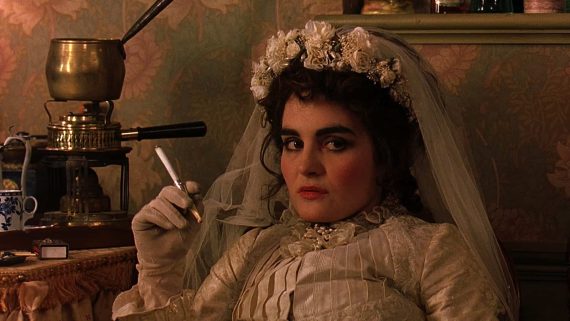 Broadbent and Corduner of course are given the heftiest roles and they both succeed admirably. Broadbent is particularly good in one of his finest performances, no mean feat in his vast and highly regarded career. His Gilbert is one of the least outwardly likeable characters in the film, but Broadbent imbues enough depth and wit into the role to keep him on side. Corduner’s Sullivan is a slightly less conflicted character, but the actor provides great warmth and charisma. Corduner is also a proficient musician in real life, so Leigh revels in showing him actually play some quite complex piano pieces and he makes a convincing conductor.

In fact, the whole cast sang their own parts for the film, despite the majority of them not having come from operatic or even musical theatre backgrounds. Reportedly some critics have scoffed at this, but I thought the cast did a convincing job and their slightly less polished efforts make for more emotionally satisfying performances than a highly-trained ‘perfect’ voice might, in my opinion.

The music is wonderful too. Leigh admits in the extra features that Gilbert and Sullivan’s work was pretty fluffy, with often nonsensical plots and formulaic styles, and he doesn’t claim otherwise in the film either. So this is no bog-standard celebratory biopic in the typical Hollywood mould. The film is, instead, about the production of mainstream art in general. However, the film does display the great pleasure that can be found in Gilbert and Sullivan’s work, in its catchy melodies, buoyant tone and witty lyrics. I won’t lie, I fired up Spotify straight after the film and ran through some of their ‘hits’. 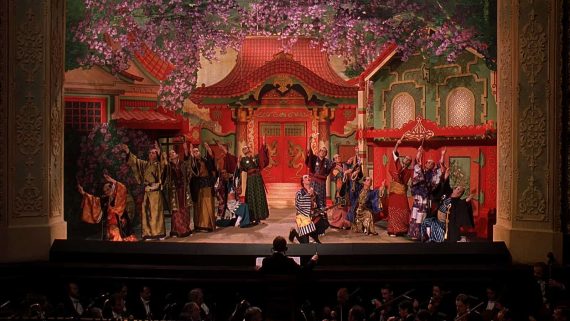 Visually the film is a feast too. The cinematography is classically handsome and, working on a relatively small £10 million budget (tiny for a lengthy period piece), Leigh’s team do a remarkable job at recreating the era. Reportedly the makeup artists even went as far as to sample authentic Victorian makeup to figure out what materials were used, so they could use the same in the film. They and costume designer Lindy Hemming rightfully won Oscars for their troubles.

Leigh went to great lengths to make the film as historically accurate as possible in every aspect, much of which isn’t even clear when watching. Some of Gilbert and Sullivan’s dialogue together is taken from letters they wrote to each other, for instance, and they used Gilbert’s original stagings of the operas in the performance segments of the film.

All-in-all then, Topsy-Turvy is a lovingly detailed account of the creative process. It’s a procedural piece in many ways, but wonderful performances across the board and sharp dialogue make for a hugely enjoyable experience. Lavishly produced and filled with music, it’s a feast for the eyes and ears, as well as a loving ode to the theatre and the creation of art in general. Simply marvellous. 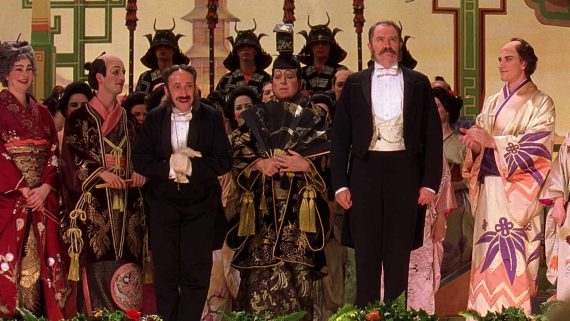 Topsy-Turvy is out on 19th October on Blu-Ray in the UK, released by The Criterion Collection. The picture quality is immaculate – crisp, natural and detailed with deep colours. The audio is rich and clear too.

Leigh does a fine job on his commentary, never running out of illuminating things to say about the production during the lengthy running time. Likewise, his conversation with Gary Yershon is fascinating, covering both the making of the film, the use of music within it and Gilbert and Sullivan’s work in general.

The deleted scenes flesh out a few characters and elements of the story a touch, though I wouldn’t say they were sorely missed from the film.

The archive featurette is pretty good too, though doesn’t go as in-depth as Leigh’s more recent contributions to the disc.

A Sense of History is a simply presented but enjoyably dark satire of the British upper-classes. Leigh reportedly got the idea of making Topsy-Turvy with Jim Broadbent during the production, so there is another slight link between the films beyond the principal creative forces.

The booklet provides the usual insightful essay on the film and is not to be ignored.