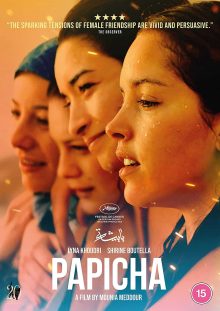 Peccadillo Pictures are proud to announce the release of Papicha on DVD and on demand on September 28th. This striking debut feature from director Mounia Meddour is loosely based on memories from her childhood during the Algerian Civil War – the “Black Decade”- The film has won numerous awards including Cesar’s for Best First Feature and Most Promising Actress as well as having been Algeria’s entry for the Oscars. It features a strong ensemble female cast with a wonderful, stand-out performance from Lynda Khoudri (due to star in the new Wes Anderson film) in the title role.

To celebrate the film’s release, Peccadillo Pictures have offered us two copies of the film on DVD to give away to two lucky readers!

Underground discos thud to the beat of music as men and women dress to the nines and slip through checkpoints to party the night away. Meanwhile, fingers on triggers, tension mount between armed police forces and anti-government guerrillas.

This is Algiers in the 1990s and what headstrong fashion student Nedjma, ‘Papicha’ to her friends, doesn’t know, is that her life is about to change forever… Lifting the lid on the radical events of the Algerian Civil War, Mounia Meddour’s ‘Papicha’ follows the trials and tribulations of a group of determined young women as they come face to face with a new, dangerous reality.

Once you’ve shared/tweeted the competition, you need to email us (subject – Papicha Competition’) with your name, Twitter/Facebook handle (whichever you used to share the competition) and postal address to: info@blueprintreview.co.uk