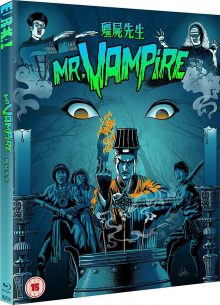 After working as a cinematographer on a number of projects with/for Sammo Hung, Ricky Lau asked if there was something he could direct for the filmmaker. Sammo had a project for him, an idea he had for a horror-comedy based on childhood stories he’d heard from his mother and also inspired by a collection of supernatural tales called ‘Strange Stories from a Chinese Studio’ by Qing Dynasty writer Pu Songling.

After various screenwriters got involved, including Lau and with input from Sammo and Eric Tsang, this idea would blossom into Mr. Vampire. Lau was given a mid-sized budget of HKD 4.5 million to direct the picture, but halfway through production, he’d already spent it. He was given a further HKD 1 million to finish the film, but again this didn’t go far. When the film was finally finished, it ended up costing HKD 8.5 million. Lau and Sammo predicted the film would lose the studio money, due to its escalating cost and the director imagined his career would be over.

However, the film ended up being a phenomenal success. It grossed a total of HK$20,092,129 in its home territory and was particularly popular in Taiwan and Japan too. It even did well overseas, for a foreign-language import. Mr. Vampire ended up spawning numerous sequels and spin-offs, including a related TV series (which was unfortunately cut short by the death of its star, Mr. Vampire’s Ching-Ying Lam) and even a video game for the NES. This success kicked off a trend for horror action-comedies in Hong Kong, likely leading to the production of the equally successful A Chinese Ghost Story a couple of years later. 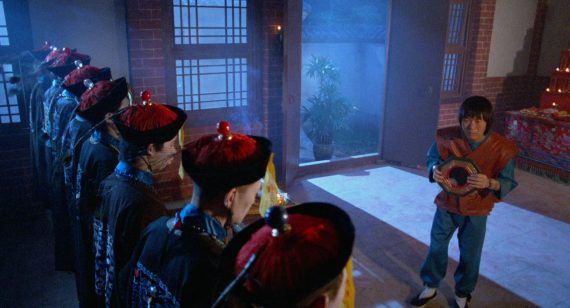 The film has remained a beloved classic in the eyes of Hong Kong genre movie fans, myself included, and Eureka are releasing it in a handsome new Blu-ray as part of their Eureka Classics series. I hopped at the chance to review it, and my thoughts follow.

Mr. Vampire surrounds the misfortunes of Taoist priest Master Gau (Ching-Ying Lam) and his pair of troublesome assistants, Man-choi (Ricky Hui) and Chau-sang (Siu-Ho Chin). They work in the area’s mortuary (or equivalent), ensuring the dead are properly buried and cared for to ease their transition into the afterlife and maintain good karma for their ancestors.

The important businessman Mr. Yang (Ha Huang) asks Gau to exhume the body of his father and rebury it in a location with better feng shui, so as to bring greater prosperity to his family. However, when Gau digs up the corpse, he finds it has barely decomposed in the fairly substantial time it had been laid there. Gau keeps quiet but knows this is the sign of Yang’s father becoming a vampire, so requests he keeps the body in his house whilst they search for an appropriate new spot.

At Gau’s home, he and his assistants try to keep the vampire from rising from his sleep and terrorising the town. However, due to Man-choi and Chau-sang doing a half-arsed job, the vampire escapes and kills Mr. Yang. Unfortunately, Man-choi is injured in the incident too and is at risk of becoming a vampire himself. Gau knows of bizarre techniques (largely involving sticky rice) to prevent this though, and he and Chau-sang set out to help their colleague and friend whilst also hunting down the vampire who’s since disappeared. 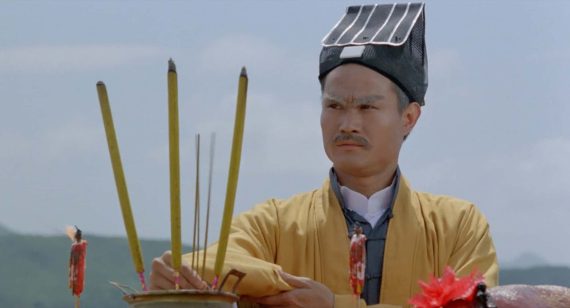 Not long after, however, Chau-sang gets into his own spot of bother when he’s seduced by the attractive female ghost Jade (Siu-Fung Wong), who wants him as a living lover. So Gau has his work cut out for him to sort everything out. On top of all this, the bumbling police officer Wai (Billy Lau), who has his eye on Mr. Yang’s daughter, Ting Ting (Moon Lee), causes more problems by attempting to arrest Gau for Yang’s death.

I’m a massive fan of Hong Kong martial-arts/action movies from this era and this is one of the most flat-out entertaining films of the lot. It may not boast any of the better-known stars such as Jackie Chan or Sammo Hung (though he did produce) and it’s not as littered with mind-blowing fight scenes as some of my other favourites, but Mr. Vampire simply fires on all cylinders to deliver a fun time at the movies.

Its prime strength is its comedy. The humour from Hong Kong films of the time can be an acquired taste, with an overabundance of lowbrow gags, mugging and jokes that don’t translate well. Mr. Vampire has its share of these things, which personally I don’t mind if they’re done effectively, but it also delivers some genuinely funny slapstick moments as well as milking its wild story concepts for as many gags as possible. By this, I’m largely referring to the wacky methods Gau uses to ward off and fight the vampires. Some of these are from Asian folklore but a great many were completely made-up by the filmmakers. The use of sticky rice to draw out the vampire ‘poison’ and to hurt fully formed vampires is the most notable example. It’s a bizarre concept but leads to numerous visual gags and skits, such as a visit to a rice vendor who slyly mixes in long-grain rice as he’s running low on sticky, not being aware it’s a life-or-death situation he’s meddling with. 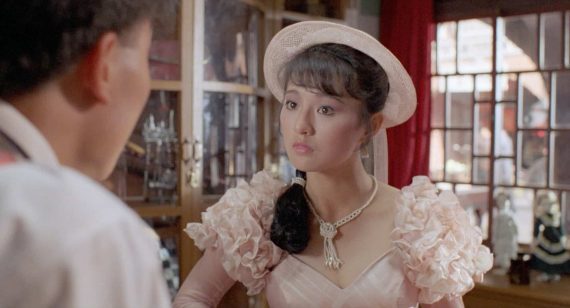 The clever use of Gau’s tricks brings a lot of charm to the film in general, even when not used for a punchline. It’s a pleasure to see what he’s got up his sleeves next. For instance, I love the bit where Man-choi and Ting Ting are trapped by a vampire, but stop him in his tracks by holding their breath (these vampires can’t see or hear, but detect your life-breath). To be able to get past him when he’s close by, they use a bamboo pipe to make it seem like their breath is coming from somewhere else.

These tricks, on top of the story focussing around some real Chinese superstitions and folk-tales, mean the film can be a little baffling to Western audiences, but that only adds to the pleasure of watching it, in my mind.

Great credit must go to the script and direction too, as the film juggles an awful lot in terms of story and concepts, but somehow no balls are ever dropped. The story always makes sense within the strange world that has been created for our enjoyment. The way all the problems ramp up for master Gau is brilliantly done too and the pacing is very effective, never losing steam and building to an exciting finale.

There is also plenty of action in the film, particularly in the end sequence. There aren’t any ‘fights’ as such, but Gau and his assistants use kung-fu to evade and fend-off the undead. There are a handful of impressive jumps and flips in particular. 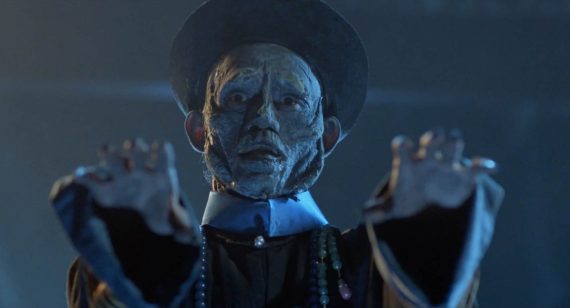 The cast are all wonderful in general, each perfectly selected for their parts. Lam often plays villains or serious ‘masters’, so it’s nice to see him playing a more comic role, though his character is the wise, level-headed straight-guy. Hui is a lot of fun in one of the main comic roles and Chin shines as both a handsome love interest and comic foil to Lam. It’s a surprise Chin never became more famous as he had the physical skills for martial arts movies as well as the look and charisma to be a leading man. He has cropped up in a few great films over the years, but usually as the sideman.

I could ramble on about Mr. Vampire forever. As you might have guessed, it’s an old favourite of mine. I’ll sum up by saying it’s hugely entertaining from start to finish and a sheer delight to watch every time I see it. It’s absolutely bonkers, but somehow never feels messy as it races towards its thrilling finale. Your mileage will depend on your taste for wacky Hong Kong comedy, but if, like me, you find its goofy, manic style beguiling you owe it to yourself to check this out. You won’t be disappointed.

Mr. Vampire is out on 20th July on Blu-Ray in the UK, released by Eureka as part of their Eureka Classics series. The picture quality is excellent. The colours are strong without looking unnatural and detail levels are high. Audio is decent too (I watched with the original Cantonese mono track).

Frank Djeng’s commentary is very good. He has plenty of facts about the production and its cast and crew, as well as some personal recollections of watching this and other films at his local cinema in San Fransisco.

The archival interviews are decent too. The trio have plenty to say about the experience. Ricky Lau says it was hard work, with cast and crew putting in a lot of hours, but they all still have relatively fond memories of the shoot. They seem honest and open too, and describe how they first got into the industry.

The booklet consists of a couple of insightful essays on the film, so makes for recommended reading too.