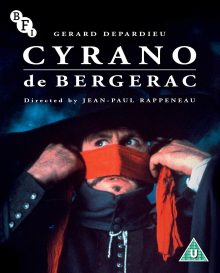 Edmond Rostand’s classic French play, ‘Cyrano de Bergerac’, has been adapted for the screen at least 14 times, not to mention been referenced and homaged on countless occasions in TV series, particularly sitcoms. However, there’s one version that stands head-and-shoulders above the rest and is the one most people will think of when asked about the play or character, and that’s Jean-Paul Rappeneau’s 1990 version, of the same name. Starring Gérard Depardieu as the titular character, it was the most expensive French film of the time, so was a slightly risky venture (I say slightly because Depardieu was already a star in France at the time) but paid off in spades, becoming an international success, making Depardieu a global star, as well as kick-starting a major revival in period French cinema in the 90s. It even managed to break down the foreign language barrier in the Oscars, getting nominated for several awards outside the Best Foreign Language Film category. It even won one for Best Costume Design, though surprisingly the Foreign Language award was nabbed by Journey of Hope. This achievement has been roundly trumped by Parasite this year of course, but it was still an impressive feat back in 1990.

30 years later, the BFI are releasing the film in a handsome Blu-ray package with a host of extra features and I thought I should poke my fairly substantial nose into it.

If you don’t know the story of Cyrano de Bergerac, where the hell have you been for the past 120-odd years? I shall give a brief summary anyway, for those who might need reminding. 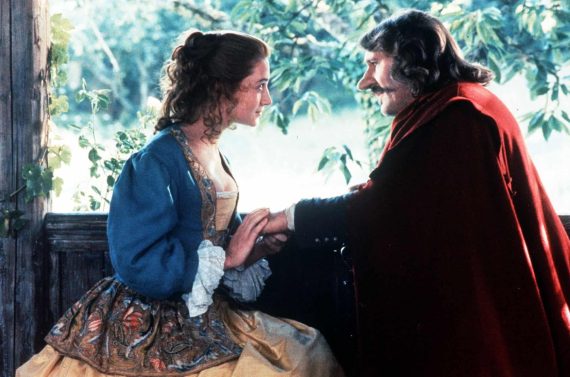 Cyrano is an officer of the French guard whose skill with a sword is matched, if not bettered, by his wit. A true poet, he can insult an enemy to his knees and publicly humiliates a famous but hammy stage performer at the start of the film. However, despite all this skill and bravado, he has one weak spot, his rather large nose. He is terribly self-conscious of it and fires up whenever anyone brings it up. Most importantly though, it gets in the way of his deep love towards his cousin Roxane (Anne Brochet). He believes he is too ugly for her, so never professes his love. His heart is further broken when she confides in him that she is enamoured with a young, attractive soldier called Christian (Vincent Perez), who is to join Cyrano’s company of cadets and also clearly feels for her. She asks her cousin to look out for Christian and prevent him from getting the usual brutal treatment new cadets are treated to. Cyrano reluctantly agrees but when he meets Christian and learns the young man is too shy and tongue-tied to woo her, he realises there’s a way for both of them to win over Roxane. Cyrano will write her passionate letters of love, claiming to be from Christian, and he can also help tell the young man what to say when the couple meet.

This plan, of course, hits some difficulties, but throwing the biggest spanner in the works is De Guiche (Jacques Weber). This Count has it in for Cyrano and also has his eye on Roxane. When he becomes a military colonel, he sends Cyrano and his company (including Christian of course) to the front during the Franco-Spanish war. 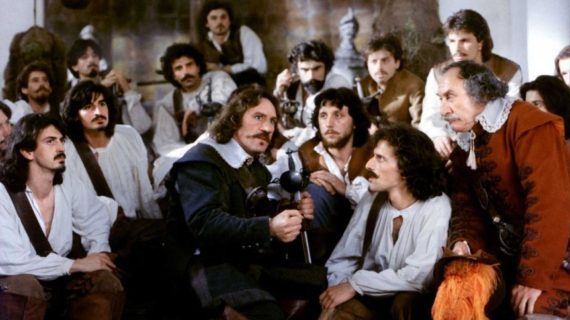 Cyrano de Bergerac is classic epic cinema at its finest. The grand budget and Rappeneau’s eye for period detail mean it’s a lavish yet realistic-looking film. The costumes, production design and use of locations is a feast for the eyes.

However, the film’s strengths don’t purely lie in its attractive settings and trappings. It has a great energy, propelled by Rappeneau’s direction, keeping either characters or the camera moving near-constantly, only pausing when a scene calls for calm.

Equally as vital to this propulsion is Depardieu. It’s perhaps the role he’s most famous for (no mean feat when you consider he’s been in over 200 films) and he seems to have been born to play it. He gives the character a fiery passion and bravado without losing the necessary grace and poeticism. Although it’s a big performance, he knows when to bring it down and gives his character depth and compassion.

The dialogue is also a key factor in the film’s success. Rappeneau chose to retain the style of the original play, which was written in verse, so there’s a feel akin to the work of Shakespeare. There’s also a great deal of humour in the text, with a standout scene involving Cyrano listing a huge variety of insults a Viscount could have used instead of calling his nose simply “very big”. All this would be lost in translation were it not for the fine work of the great Anthony Burgess in producing the English subtitles (after translating the play in the 70s). He keeps the poetry without losing the meaning, an art unto itself. 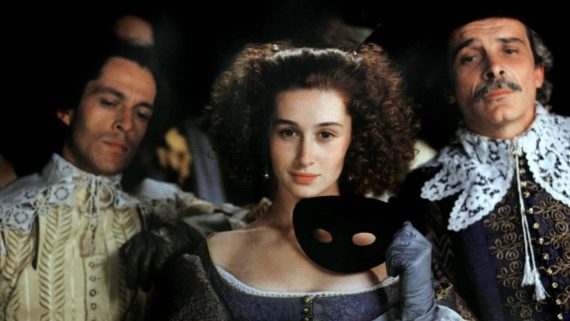 My only criticism of the film is that, like most epic dramas of its ilk, it does feel a tad overblown at times. In particular, I felt the final scene was drawn out to a near-comical degree. I realise a grand film needs a grand finale, but I felt the poignant denouement could have benefited from a tighter, more intimate approach.

Minor gripes aside though, Cyrano de Bergerac is grand, sweeping drama on a handsome canvas. Filled with romance, humour and excitement, all delivered in an eloquently poetic fashion, it’s a crowd-pleasing classic. A touch over-the-top perhaps, but undeniably entertaining and beautifully crafted.

Cyrano de Bergerac is released on 24th February on Blu-Ray in the UK, released by the BFI. The picture quality is fantastic, looking natural and detailed with consistent colours. Audio is strong too.

There are plenty of extra features included in the set:

– Full-length feature commentary by Ginette Vincendeau: the Kings College London professor on the film and its art-historical context
– Interview with Gérard Depardieu (12 mins): the actor recalls making Cyrano de Bergerac
– Interview with Jean-Paul Rappeneau (8 mins): the director discusses the influence of the 1923 version
– Anthony Burgess with AS Byatt (1987, 58 mins): Burgess discusses his views on language and the arts with author and critic AS Byatt
– Gérard Depardieu in Conversation (1987, 76 mins, audio only): the Cyrano de Bergerac star discusses his life and work, recorded on stage at the NFT
– Image gallery
– **FIRST PRESSING ONLY** Fully illustrated booklet featuring new writing on the film by Martin Hall

Vincendeau’s commentary is quite dry perhaps, but nonetheless provides a thorough analysis of the film and play. Depardieu’s NFT interview is enjoyable, with the actor on fine form and a lot of ground is covered due to the substantial length. The shorter interview is more focussed on Cyrano de Bergerac, so is a welcome addition too.

The Rappeneau interview is quite short, but it’s interesting to see clips from the 1923 silent film adaptation of the play and hear and see how it influenced the director’s version. The Anthony Burgess interview contains no mention of Cyrano de Bergerac but it’s nonetheless a fascinating discussion on his life, work and beliefs.

The booklet is superb, with a wide variety of writing on the film, director, Depardieu and other adaptations of the play.

A fine set then for a fine film.