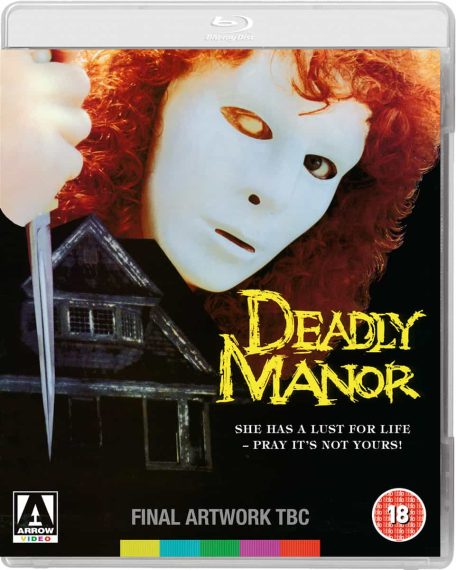 Towards to the end of the 1980s, and his directing career, cult Spanish director Jose Ramon Larraz (Vampyres, Symptoms) made a trio of transcontinental slashers. These American-Spanish co-productions included the excellent and already released by Arrow, Edge of the Axe, Rest in Pieces (come on Arrow, pick that up for release!) and 1990s Deadly Manor. Serving as one of Larraz’s final films Deadly Manor was entirely shot in the US (unlike Axe and Pieces which were primarily filmed in Spain, but set in the US!) and despite a full on manic final 20 minutes it’s unfortunately not the director’s best and pales in comparison to the much superior Edge of the Axe.

Nicely lensed in upstate New York (Arrow’s 2K restoration is fantastic) and utilizing a real spooky looking mansion that was scheduled for demolition, Deadly Manor is that timely old slasher story of a bunch of good looking, albeit annoying, teens off for a weekend of frolics who decide en-route to shack up in a deserted mansion they happen to come across. Stupid, stupid teens! As is with this type of flick all is not well in the mansion with hundreds of photos of the same mysterious woman plastered all over the walls, a couple of coffins in the basement and most alarmingly, a cupboard full of jars of pickled scalps! So our group of teens wisely make a swift exit upon discovery of all this weirdness? Nope, they decide to stay the night. Of course, they do!  So, after much wandering around, arguing, some canoodling and some requisite horror nudity, the manor soon reveals its deadly secret as the couple who used to reside there are in fact still residing there and have gone completely insane! 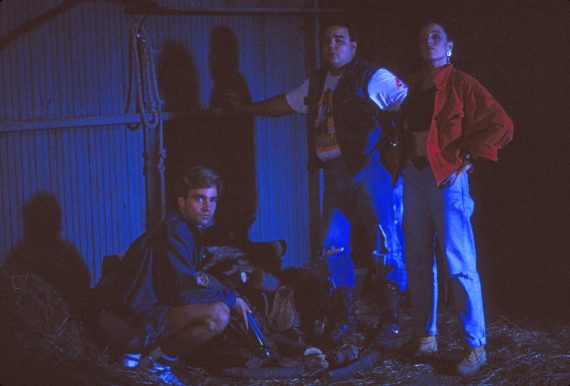 That all sounds like a great set-up for a late 80s slasher and in fits and starts it is but unfortunately there is just too much slow-paced wandering around, chemistry free banter and compared to the full-on axe violence of Edge of the Axe, little bloodletting. The setting is cool, the cinematography slick and come the final 20 minutes or so, some full-on-bat-shit crazy horror madness. This comes courtesy of B-movie queen Jennifer Delora’s (Robot Holocaust, Bad Girls Dormitory) full-force performance as the disfigured lady of the house. She’s great and while only on screen briefly and despite her scarred face make-up effects not aging well, she really sells the state of madness her character has fallen into and makes a lasting impression.

If there had just been more of her and her murderous rampage Deadly Manor would have been a solid gold B-movie treat. She also acts everyone else off screen as the teens are quite bland here, which is surprisingly considering how likeable and fleshed out the similar group of youngsters in Edge of an Axe were. Perhaps Larraz, and the slasher genre, were just running out of steam by 1990 as Deadly Manor just never gets the momentum it needs going. Still, Larraz soaks proceedings in an effective sense of dread, there’s a fair bit of nudity to ramp up the exploitation vibe and as mentioned, the finale is worth waiting for meaning Deadly Manor is still worth a watch for die-hard slasher fans and completists.

Deadly Manor is released in the UK on Blu Ray from Arrow Films on February 17th 2020.