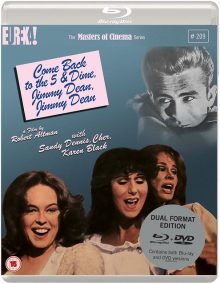 Robert Altman is one of the greatest American filmmakers and made a huge number of films during his long career, including several classics (alongside a few duds), so it’s easy for some to be forgotten over the years. Come Back to the 5 & Dime, Jimmy Dean, Jimmy Dean is one such ‘lost’ film from his intimidating oeuvre. The unwieldy title probably didn’t help, but also I get the impression the film was intended as a bit of a minor palate cleanser after the commercial and critical failure of Altman’s live-action Popeye movie (the film actually made back its money, but didn’t reach the studio’s financial expectations). With a high budget and presumably higher pressure than usual from the studios, the production of Popeye must have been a great strain on the director, particularly as, by all accounts, the production was a nightmare. So Altman retreated from big budget work and picked up the rights to Ed Graczyk’s play Come Back to the 5 & Dime, Jimmy Dean, Jimmy Dean. He actually first directed it on Broadway in 1982 before shooting it as a film later that year, employing the same principal cast. It may not be as well known as M*A*S*H or Short Cuts, but Eureka feel Come Back is worthy of re-discovery as they’re releasing it in a fine dual format Blu-Ray and DVD package in the UK, as part of their Masters of Cinema collection. Being an Altman fan, I decided to give it a whirl.

Come Back (I can’t be bothered to keep typing the full title) is set in a ‘5 and dime’ store in a small Texas town in 1975. It’s the 20th anniversary of James Dean’s death and a group of childhood friends who called themselves the ‘Disciples of James Dean’ reunite as adults in commemoration. During this reconciliation, the group look back to the past, particularly to 1955 which not only saw the death of their idol but featured some personal traumas that shaped their futures. I won’t say too much as the information is gradually drip-fed throughout the film, but among these incidents are the rape of Jo (Mark Patton) and the conception of Mona’s (Sandy Dennis) child, who she claims is James Dean’s. She even named the boy Jimmy Dean and the store in which she worked (and the film is set) used to capitalise on this ‘fact’. As the film goes on, real truths become unveiled, spurred on by the arrival of passerby Joanne (Karen Black), who seems strangely familiar to the group. 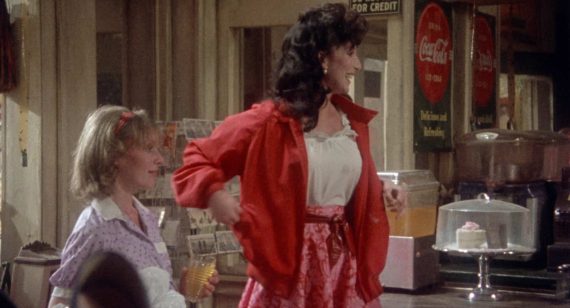 Although quite a straight forward melodrama on the surface, I found Come Back to have hidden depths that developed further in my mind after watching the film. Clearly, the film is about putting on a facade or front, symbolised when Mona describes visiting the remains of the Giant set erected nearby that was only the shell of a great mansion. However, I realised this theme was embedded further than I thought. There are multiple facades to be found in all the characters and the fact all them (other than Jo in flashbacks) are women suggests that it’s making a statement about how women, in particular, are forced to hide behind the cover of appearance in a male-dominated world. This is heightened through the introduction of a transexual character, who is presented in an incredibly progressive fashion for the time. It was quite fitting that I saw this shortly after Hedwig and the Angry Inch as they make an enlightening pair of films on the subject of identity and transgenderism.

The drama perhaps doesn’t hide its ‘revelatory’ climax very well, but I don’t think it was ever trying to. We’re supposed to feel sadness for Mona and the crumbling front she puts on, so it’s more about her acceptance than the discovery of newly unveiled facts.

The film is also looking at how nostalgia distorts memory. This is visualised through the method Altman uses to transition between the present and the past. Whenever we move back to the 50s, the camera turns towards the large mirrored wall at one side of the shop and we see things play out in the reflection (i.e. a distorted view of reality). 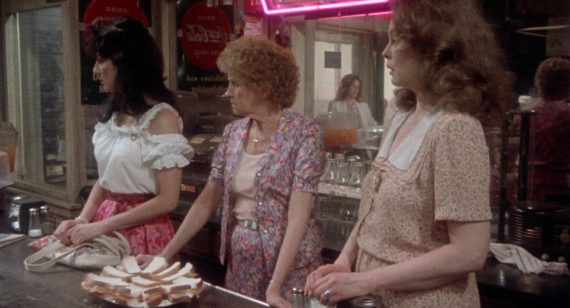 This technique is clever and well-executed, but it does point towards one-issue I had with the film. It’s not a major problem, but it felt rather theatrical. Altman chose to keep the flashback mirror effect practical, implemented just as it was on stage. This is a neat trick, but it doesn’t feel as cinematic as it might have. Not helping matters is the fact the film remains in one single location throughout. Altman does add a subtle reverb effect to the flashback audio though, which is a nice touch.

Some of the performances are a tad theatrical too perhaps, but certainly not poor in any sense. Cher impresses in her first major dramatic role and Karen Black is particularly strong, though there isn’t a weak link here. A young Kathy Bates doesn’t have the meatiest role in the film, but she makes an impression. Most interesting though is Sandy Dennis. At first, I felt she was over the top and her delivery felt very ‘performed’, but as the film went on I realised that was the intention. Out of all the characters, her Mona is the most entrenched in fantastical delusions of the past, so her whole adult life has been a performance of sorts. 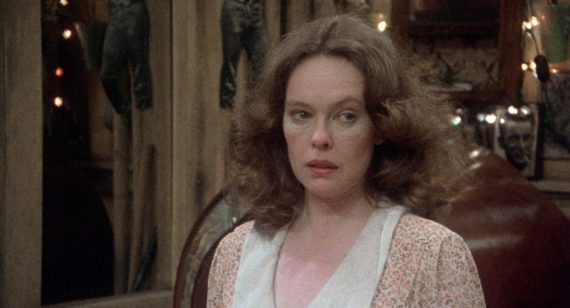 Overall then, it’s an engrossing stage adaptation that is very much a product of its source. The theatricality of its presentation and occasionally the performances can feel a tad much from time to time, but largely Come Back is a fine showcase for a handful of great actresses. Altman lets them do their thing and has fun with moving in and out of flashbacks in a unique fashion. It also has a lot to say about the masks people, particularly women, hide behind to be part of ‘respectable’ society, so the film reveals itself to be a thought-provoking forgotten gem in Robert Altman’s great filmography.

Come Back to the 5 & Dime, Jimmy Dean, Jimmy Dean is out on 17th June on dual format Blu-Ray & DVD in the UK, released by Eureka as part of their Masters of Cinema series. I watched the Blu-Ray version and the picture shows some slight colour fluctuations and the grain is quite heavy, so struggles at times with the digital conversion. This means it’s not the greatest transfer I’ve seen, but it might be down to the source as it was shot on Super 16 rather than 35mm. It still looks decent for a 37-year-old film though. I had no issues with the audio.

The commentary is excellent. I don’t think I’ve come across Lee Gambin before, but I’ll keep an eye out for his name among special features in the future as he strikes a nice balance between offering possible readings into the film and providing interesting facts about the production and those involved. With little downtime, it’s a well researched and engrossing listen. The two interviews are strong too, offering insight into roles not always covered in great detail within special features. As ever, the booklet is well compiled too.