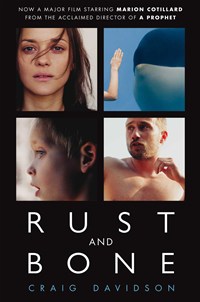 Craig Davidson’s book of short stories, Rust & Bone is at first a surprise after watching the recent film adaptation. As well as being moved from North America to France, the film is actually an amalgamation of two separate short stories and two characters that, in the book, inhabit quite different worlds. It’s a tribute to Davidson that Jacques Audiard was inspired so much by his writing that he wanted to adapt two of the stories. However, it’s also a tribute to him that, while Audiard had to rewrite the stories to a large degree, he stayed true to Davidson tonally.

There are no heroes in these brief tales, only flawed individuals coming to terms with themselves and the particular lives they inhabit; but each character is deeply human and the writer makes you feel sympathy for them all, despite some of them being distinctly un-likeable individuals.
Outwardly ordinary, they are people that we may think we know but their individual passions open new worlds to us, often letting us into less seen aspects of North American life. As a result the reader thinks more about the wider world they’re truly living in.

The eight stories in total take us into unusual places including bare knuckle boxing matches, orgies and magic shows. Davidson packs a punch with his writing describing physical sensations, behaviour and desires in unabashed detail. He sets this against a far gentler yet constant attention to the physical environment. Descriptions of light and colour, the weather, the city or landscape are interspersed with sporting terminology, harsh language and graphically detailed injuries. In this way every story is light and dark, physical and brutish and yet human and beautiful. It’s not easy reading – visceral, at times sickening, and honest to a painful degree that occasionally makes you want to look away from the page.

The characters in each story are confronted by their failures with regard to how they’ve treated the other people or the animals in their lives. No two characters are alike in their responses, some find redemption through sacrifice or a change of behaviour while it’s clear that for others they are yet to face the realities that we can see, and we leave them at this point in their journey. It can feel as is Davidson is asking us to judge some characters more harshly than others, as if some are more deserving of our sympathy but every character, like every reader, is flawed and I think it’s just about the part of their journey for which we join them.

I found it interesting as a woman to read a book by a man, mostly full of stories about men that are often very masculine with subjects ranging from extreme sports to sex addiction. The worlds we get a glimpse into are male dominated but Davidson is not short of strong female characters and often examines the mistreatment of women as one of his characters’ flaws. This way we end up with a book that can appeal to both sexes, with stories about men who are so often outwardly strong and yet inwardly struggling.

The collection is not like anything I’ve read before. It’s definitely writing for grownups and not for the fainthearted. If you’re sensitive to animal cruelty you’d be advised to skip A mean Utility, the story of a young couple whose passion has always been dog fighting although they really want to conceive a child. However, I expect we’ll be seeing a lot more of this author and with his talent for creating strong physical imagery I expect Rust and Bone won’t be the last time his work is adapted for the screen.