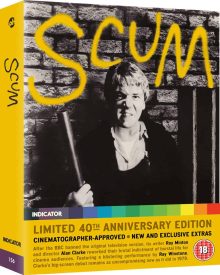 Alan Clarke’s Scum had a troubled history. The director originally turned Roy Minton’s script into a television play (the old British name for TV movies, as the Beeb liked to separate their work from films back then) in 1977, but it was banned presumably due to the violence depicted. The play did get screened to the press and selected audiences though and it was rightfully praised as a powerful piece of work. So, not long later, Clarke was approached about the possibility of turning the play into a feature film, as censorship was less strict in cinemas. He was keen on the idea and, due to the fact he wasn’t allowed to simply use the existing play or footage, set out reshooting Scum for the big screen. The first new script for this version was reportedly a disaster and changed much of Minton’s work, but when the writer caught wind of this he was furious and eventually worked with Clarke to produce a script more in line with his original vision.

Most of the key original cast members came back, with a notable exception being Mick Ford replacing David Threlfall as Archer. Threlfall was reportedly busy and couldn’t fit the film in his schedule. The new version of Scum was released in 1979 and it was a great critical and commercial success. It still courted controversy for its graphic content (particularly when it was broadcast on TV later) but managed to remain largely untouched by the censors. The TV version was eventually released too, in 1991, and both have become available on home video and DVD over the years. Powerhouse Films are the latest company to get in on the action, releasing the 1979 film version of Scum in a limited edition Blu-Ray on their Indicator label, complete with a tonne of special features and a hefty book. 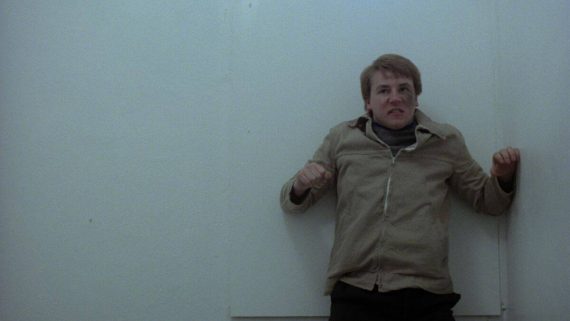 Scum is set in an English borstal (a youth detention centre – basically prison for young people). Carlin (a very young Ray Winstone) has been transferred there from another institution, where he had quite a reputation, particularly after assaulting a warden. This information has been passed on to the borstal he’s now entering, so both the guards and Banks (John Blundell), the ‘daddy’, are ready to give Carlin a not-so-warm welcome. The ‘daddy’ is the name given to the most respected/feared inmate, who has special privileges with the wardens. They support this system as a way of instilling extra fear and control over the inmates.

Carlin eventually manages to turn things in his favour and becomes the new ‘daddy’, bringing a slightly improved regime. Meanwhile, we follow the tough journeys of his fellow inmates. Archer (Mick Ford) has his own unique way of coping with time at the borstal. Very intelligent and a little too old to be there, he winds up the wardens by making various demands that they reluctantly have to give in to, such as claiming to be a vegetarian so refusing to wear leather shoes, or refusing to go to chapel due to being an atheist, leading to a special guard being posted with him during Sunday services. He doesn’t get away with everything though, so gets his share of beatings and isolation. Getting more than his share of abuse is another new inmate, the shy Davis (Julian Firth), whose weakness makes him a target to the aggressive inmates around him. With the wardens doing little to improve the lives of their wards, time in the borstal proves to be too much for some and tensions reach boiling point. 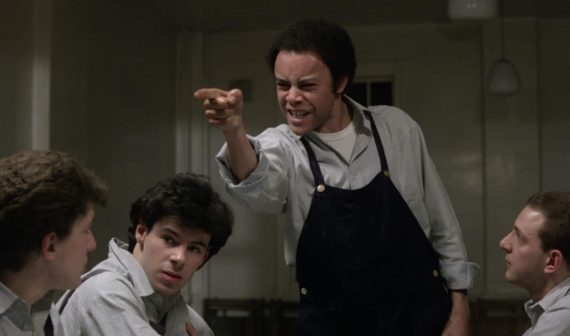 Scum is a film I’ve been aware of for a long time. The aggressive cover art and simple harsh title always stood out on the video and DVD shelves. I remember some boys at school telling stories about some of the most brutal scenes too. All of this made me think the film was just a nasty, cheap piece of exploitation though, so it’s a title I never actively sought out. However, three years ago I watched (and reviewed) Clarke’s The Firm and was blown away by it. Clearly, the director wasn’t interested in presenting violence as something exciting and in any way enjoyable but was proficient at shocking an audience in order to deliver a powerful message. So my interest in Scum developed. Predicting the film wouldn’t be an easy watch, I’ve not rushed out to see it, but this review gave me a kick up the backside to finally take the plunge. Yes, it was as tough as I suspected, probably more so, but it was worth it as the film is superb.

The film is incredibly powerful from start to finish. Vital to this impact is the way the film and violence, in particular, is presented. Clarke shoots everything in a stark, cold fashion and there’s no music to gloss everything over or milk our emotions, providing a natural, near-documentary atmosphere with little warmth. The performances are incredibly realistic too. The camera is kept largely static and smooth in motion. There’s no wild handheld work to mask the horrors on screen or disorientate the viewer. The violence is either short, sharp and shocking or believably messy and ugly. There are a handful of particularly horrific scenes that will sear themselves in your memory after watching. I found the climax of the film particularly disturbing and I must admit I had trouble sleeping afterwards, it was that powerful. 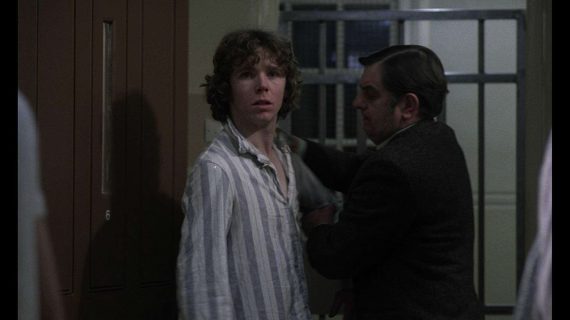 Scum was that powerful in fact, it supposedly helped move towards the abolishment of the borstal system in the UK in 1982. The film certainly paints a damning portrait of the institutions, with the cold and aggressive treatment of inmates doing little to reform or educate them, instead encouraging and developing further criminal actions. The system is also shown to be terribly damaging to the mental health of the young men. These arguments are made blatantly clear through much of the dialogue between Archer and the wardens, particularly in one powerful scene where he has an honest chat with the guard looking after him whilst everyone else is at a Sunday service. Dialogue such as this could perhaps be deemed a little too on the nose and is clearly Minton (and likely Clarke) venting his views, but it’s powerfully delivered and hard to argue with. Some of the unmoving actions of the wardens have been similarly criticised (I’d particularly point towards the scene where one watches a boy get raped but simply grins and does nothing to the perpetrators), though the film argues they too have been institutionalised by the system.

Possibly blunt messages aside, Scum is inarguably a potent indictment of borstals and the penal system in general. Presented in a stark, no-frills fashion, never flinching from the horrors of life inside, it still packs a mighty punch. It’s not a film you’re likely to forget after watching, even if you might want to. 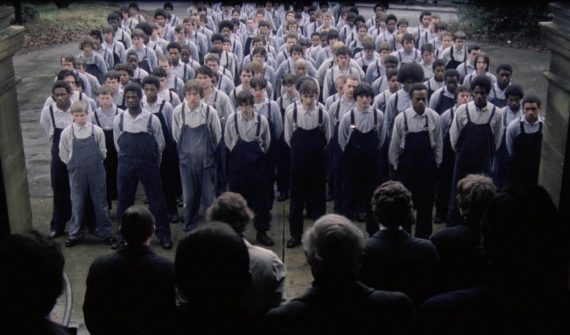 It’s an exhaustive set of features that covers every nook and cranny of the film’s inception, production and reception. Due to the material being spread over numerous interviews there is a fair amount of repetition though, so perhaps editing everything down to a feature-length doc might have been the best option, but it’s hard to complain about a film getting such a thorough release. It would have been great to have the TV version included too, but I appreciate licence issues will have got in the way. Indicator strikes me as a label who would have tried hard to get it.

The real star of the show in this set though is the book. Lengthening their usual 30-40 page booklets to 80 pages, Indicator has ensured everything you’d want to know about the film is covered in great detail. It makes for eye-opening reading and goes to prove that physical media still has a lot more to offer to film fans than Netflix and its ilk.