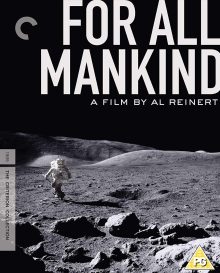 The Apollo 11 mission in 1969, which saw man first set foot on the moon, was a monumental event well-remembered by most people alive at the time. Much of it was televised for all to witness that amazing first step. However, let’s be honest, that original broadcast looked pretty ropey. That murky black and white footage isn’t particularly clear so it’s no surprise conspiracy theories began to crop up that the landing was faked in order for the USA to win the ‘space race’ against those damn Ruskies. Several more lunar missions followed over the next couple of years, each with increasingly better (if less famous) footage. Then, after Apollo 17 in December 1972, NASA ceased their lunar exploration missions and no humans have landed on the moon since. The live TV pictures from the surface must have been pretty incredible to viewers at the time, but after a few missions people grew less interested in the Apollo programme and the public lost their hunger to see more.

However, in 1979, journalist Al Reinert was doing research for a story about the Apollo programme for ‘Texas Monthly’ and discovered that huge amounts of film footage from the missions had been shot, largely by the astronauts themselves, but kept in storage by NASA without ever being shown to the public. The material had been shot to help scientists back on Earth study the environment and effects of travelling in space, help analyse materials found on the surface of the moon and for engineers to look over if anything went wrong with equipment on a mission. When Reinert got a look at some of this footage though, he realised there was some amazing material which could make a great documentary. 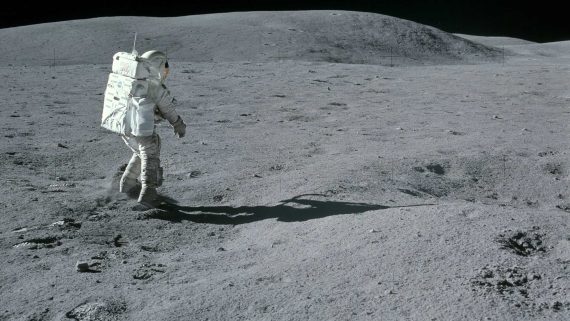 He got permission to use the archived footage, but going through it and making the film proved to be more difficult than he imagined. He couldn’t simply take the material out of the Johnson Space Centre where it was stored. He had to painstakingly scan it all, a process which took him 18 months and left he and his editor Susan Korda with around six million feet of film footage to use. Added to this pile were 80 hours of NASA interviews obtained by Reinert and another couple of filmmakers who’d made previous documentaries on Apollo missions.

Reinert ploughed through his ‘mission’ though and 10 years after the discovery of the archive material he released For All Mankind, probably the most famous and respected documents of the moon landings. With 2019 being the 50th anniversary of Apollo 11, Criterion are celebrating by releasing a handsome new Blu-Ray release of the film in the UK. As usual, I was there to quickly snap up a review screener.

For All Mankind combines footage from all of the Apollo missions (as well as some shots from Project Gemini) and cleverly edits everything together to make it feel like we’re following one single mission. Interviews with the various astronauts involved in them all make up the background narration. We never see talking heads, instead focusing all visual attention on the mission footage. 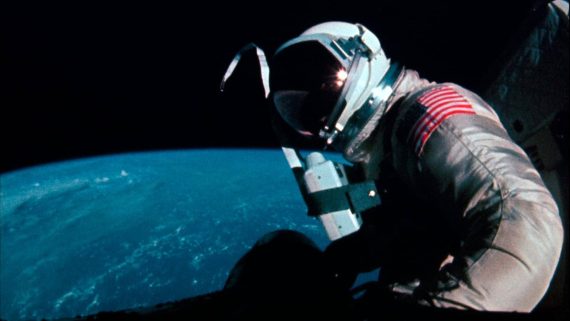 It’s an approach that works brilliantly. The material of course is breathtaking. Footage from space is less rare to see now, but watching these brave men venture into the unknown (or relative unknown for the post-11 Apollo missions) is positively thrilling and I’ll never tire of seeing shots of the Earth from space. Blown up on my projector, it looked incredible and transported me right there with the astronauts. The soundtrack by Brian Eno is superb too and perfectly complements the visuals.

The beauty of the film doesn’t only come from pretty shots of Earth and the Moon though. What’s great about For All Mankind is how it captures the more human and playful aspects of the missions. We see the astronauts goofing around in zero gravity on the spacecraft and hopping around the surface of the moon like helium-filled rabbits, regularly tripping over and falling flat on their faces (or rather helmets). Shots back in mission control also help the audience appreciate the tension, worry and pride the full team behind each mission went through. 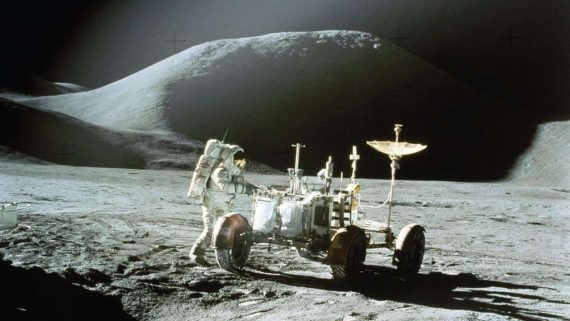 Adding to the ‘fly on the wall’ material, the interviews go a long way to help produce a more intimate and relatable document of the literally ‘out of this world’ experience of heading to the moon. Rather than recite dry accounts of the preparation and technological aspects of the mission, the astronauts tell us, as best they can, how it actually felt to be out there. This makes for a fairly philosophical and occasionally poetic backbone to the film that all goes to help build on the immersive atmosphere of it all.

I was truly blown away by the film. It’s a stunning and beautifully made ode to those select few who have ventured to the moon. It manages to be surprisingly intimate and personal whilst presenting the awe-inspiring footage of these extravagant explorations. Utterly spellbinding from start to finish, I believe it might be one of the finest documentaries I’ve seen.

For All Mankind is out on 24th June on Blu-Ray in the UK, released by The Criterion Collection. The picture quality is superb, showing the range of footage in as good a light as possible without altering it. The soundtrack comes through nicely too.

It’s an excellent array of extras that do a great job of filling you in on the nuts and bolts details not included in the film itself, as well as describing its inception. There are a few interesting pieces with the astronauts involved speaking about how they’ve dealt with the unique impact of being among the few people to have walked on the moon. The collecting geek in me loved the visit to the stores holding all the original footage too. Overall, it’s a superb package for a superb film.