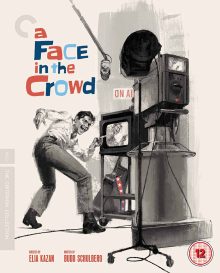 Elia Kazan was one of the great American directors, but his work is often overshadowed by his controversial testimony to the HUAC (House Un-American Activities Committee) in 1952 during the McCarthy ‘witch-hunts’. He gave them the names of people who’d been card-carrying Communist members when he was one back in the 30s. It was likely a difficult decision to make, losing him a lot of friends, but he didn’t help matters by never apologising for his actions and soon after posting an advert in the New York Times urging others to do the same. One positive that did seem to come from the whole affair though, is that the films of the already respected director got even better. Perhaps the two aren’t linked, but the anger and controversy he faced at the time seemed to spur him on to make more thought-provoking and morally complex work than before. To name but a few, after the hearings he directed On the Waterfront, East of Eden and Splendour in the Grass. Another film he directed not long after the hearings was A Face in the Crowd. This performed relatively poorly at the box office and only received mixed reviews from critics at the time, but has since become thought of as one of the director’s best films. It’s one I’ve been keen to see for a while and Criterion answered my prayers by releasing the film on Blu-Ray as part of their esteemed collection.

A Face in the Crowd was written by Budd Schulberg, based on one of his own short stories. It opens with the straight-talking drifter Larry ‘Lonesome’ Rhodes (Andy Griffith) getting discovered by radio host Marcia Jeffries (Patricia Neal) during a visit to a small town jail to hear from ‘a face in the crowd’. He’s a soulful musician and speaks his mind so quickly becomes a local celebrity, stirring up trouble with the authorities and winning over the hearts of the public. Soon big city media moguls and advertisers catch wind of Rhodes and he eventually ends up in New York, spinning his earthly wisdom to the whole country on TV. The power gets to his head though and he pushes it to near megalomaniacal levels, particularly when he enters the world of politics. He acts as a media advisor for a presidential candidate, but with an eye on his own position within the cabinet. Marcia, who falls in love with Rhodes early on, can’t bear what he’s become, particularly as he treats her horrendously, but continues to help keep the juggernaut of his fame on track. A writer friend, Mel Miller (Walter Matthau), tries to talk her into doing the right thing though. 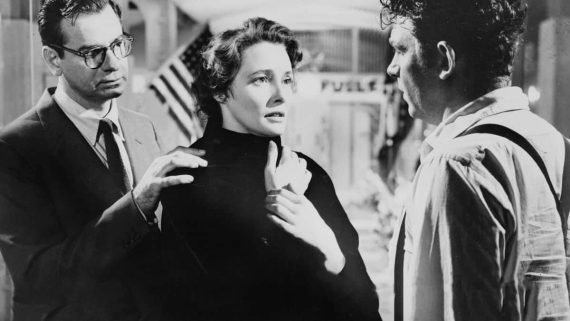 The most striking thing about this wonderful film is how prescient it was in warning of the power of TV and celebrity in politics. With the likes of Ronald Reagan, Arnold Schwarzenegger and now Donald Trump, among other celebrities, gaining seats of great power in the US, it’s clear that the predictions have come true. The way political campaigns are driven now in general is hugely centred on image over actual abilities as leaders. You can forgive audiences and critics at the time for thinking the film was far fetched and over the top, but it feels more like a documentary these days.

The film goes in some dark places too, considering when it was made. Rhodes is a womaniser and the film is very frank in its portrayal of him as such. The scene where he and Marcia finally consummate their relationship is off-screen but blatantly obvious and there’s a disturbing sequence when Rhodes eyes up an adoring teenage fan doing a sexually charged majorette dance. He soon whisks her away and marries her too, much to the horror of Marcia.

Although the film is quite long, it has an intense forward momentum as Rhodes’ fame explodes and his greed for power escalates. It all culminates in a furious final sequence that comes close to going over the top, but is pulled off with noir-ish style. This shadowy look appears in much of the second half in fact, accentuating the worrying directions Rhodes’ fame takes. 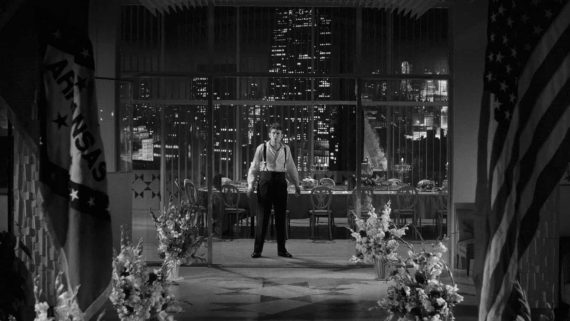 Kazan was always known as an actor’s director, leading his performers to 21 Oscar nominations and 9 wins in the 19 films he directed during his career. He didn’t get any Oscar love here though, which is a crying shame as it boasts some superb performances. Griffith is a force of nature in this, his debut film performance. He has the raw charisma to let us believe his rise to fame, but also the maniacal energy to accept his downfall. Griffith went on to be one of America’s favourite TV comedians, but here he shows a commanding power and venom little seen later in his career. Supposedly Griffith almost quit acting following A Face in the Crowd, as he found Kazan’s method techniques difficult on his mental health. He didn’t quit, but perhaps it explains why he stuck to largely lighter roles and TV following the experience.

Not to be ignored though is Griffith’s co-star Patricia Neal. Often sat quietly on the sidelines, she does a lot with her eyes and face and the role demands a greater range than the showier Griffith. Her internal conflict is portrayed powerfully and believably. A young Walter Matthau has a smaller but pretty crucial role too and does a fine job. Playing a writer who’s one of the first to see Rhodes for who he really is, he gets some of the sharper lines, priming the actor for his work to come with Billy Wilder and Neil Simon.

It’s a superb film from start to finish, presenting a searing attack on fame and the abuse of power it can bring. It feels way ahead of its time and is still totally relevant today, even if we’re a little more savvy towards the issues now. With perfectly pitched performances, a sharp script and a strong drive, it’s a brilliant film that deserves to be back in the public eye. 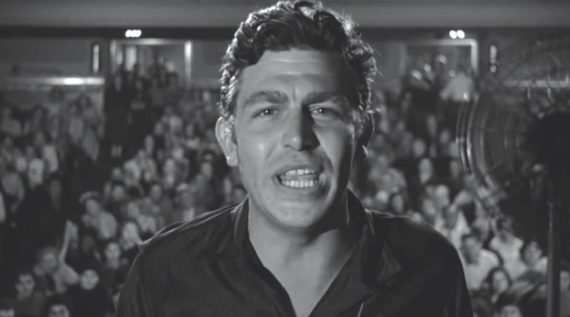 A Face in the Crowd is out on 29th April on Blu-Ray in the UK, released by The Criterion Collection. The audio and visual transfer is immaculate, as is to be expected from the label.

There’s a handful of special features included too:

The three video pieces are all worthy of attention. The Briley and ‘Facing the Past’ pieces both spend a fair amount of time on Kazan’s HOUAC testimony and ensuing fallout, but still offer some information on the production of A Face in the Crowd. The Smith interview discusses Griffith’s career and how influential he was on what was to come.