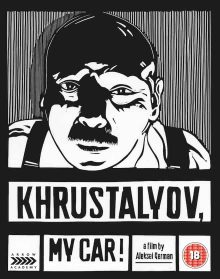 Aleksey German was a Russian director who made only 6 films in his 46 year long career. This incredibly sparse rate of production was partly due to interference from officials who objected to how Russia was represented in his films (leading to a number of them being ‘shelved’ for several years), but also due to his meticulous attention to detail in planning and shooting them. He was very much a model of the ‘auteur’ and was respected in his time, but largely just in Russia. It wasn’t until more recent years, particularly after the release of Hard to be a God in 2013, which was finished after his death, that his name became well known and honoured in film circles around the world. As such, German’s earlier work has been little seen in the West, but Arrow Academy are looking to address the situation. After releasing Hard to be a God in the UK they are turning their attention to his previous film, Khrustalyov, My Car!, with a new Blu-Ray package. I was impressed by Hard to be a God when I reviewed it a few years ago (https://blueprintreview.co.uk/2015/09/hard-to-be-a-god/) so I snapped up the chance to review this new release.

Khrustalyov, My Car! is set in Russia in 1953, the last year of Stalin’s reign. During this time, the ‘Doctor’s Plot’ was raging. This was an antisemitic campaign orchestrated by Stalin which claimed a group of largely Jewish doctors were plotting to poison Soviet leaders. Later proved to be fabricated, the rumours helped stoke antisemitic feelings in the Russian public and led to the arrest of many doctors and officials, both Jewish and not.

The film’s protagonist, General Klensky (Yuriy Tsurilo), is a doctor specialising in brain surgery. A drunken bully of sorts, in a position of power in the Russian military, he isn’t worried about being implicated in the plot. However, after a well-meaning Finnish journalist (Jüri Järvet Jr.) tries to pass some information to him, the authorities come after Klensky, believing him to be involved in some kind of conspiracy. This forces him to go on the run and his privileged existence, as well as that of his family (who we also follow throughout the film) is thrown into nightmarish disarray. 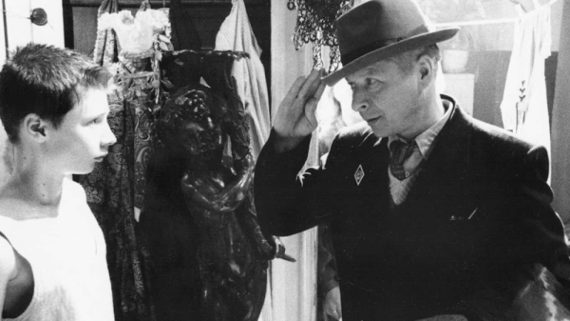 The plot sounds relatively straightforward on paper, but, like Hard to be a God, the film is rather difficult to follow. In fact, although it was in the running for the Palm d’Or in 1998 and championed by some (including jury president Martin Scorsese) for its style, it took no awards and wasn’t the success German hoped due largely to the fact that the non-Russian critics and jurors didn’t understand what was going on in the film. Interviews with the director included on this disc show this fact annoyed him and he claimed the plot was simple but maybe required you to be Russian to best appreciate it. I certainly struggled to follow proceedings, but previously seeing Hard to be a God primed me for it and I made the decision to pause the film part-way through and read most of a synopsis of it I found online. This may make me sound a bit simple, but I was glad I did it as I approached the rest of the film without the fog of impenetrable confusion spoiling matters. Yes, there were still points where I wondered what was happening, but this all added to the nightmarish atmosphere German had created.

Speaking of atmosphere, as with Hard to be a God, it’s German’s astonishing style of filmmaking that can’t fail to impress, no matter what your feelings about the content. Employing largely long takes, the camera roams through elaborate set-ups that seem chaotic, often filled with characters and busy production design, but meticulously planned by all accounts. German was a stickler for detail and took years to get authentic props and designs for the film, despite its seemingly outlandish, dreamlike presentation. 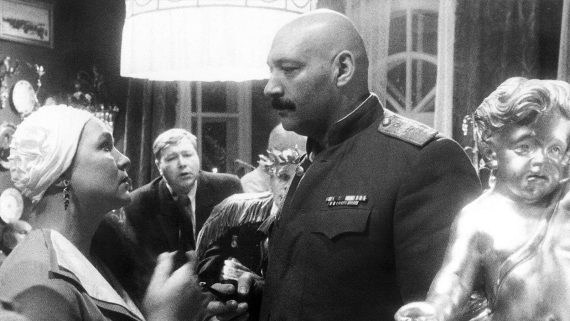 Adding to this unusual feel, the camera seems to drift between third person and first person, with characters frequently glancing at the camera. You actually see the reflection of the operator at one point too (which is even freeze-framed to highlight the fact) so German seems keen to make viewers aware that this is a film, despite his great attention to period detail and the other inherent naturalism in the film. I say naturalism, but the film is ‘hyper-real’ and often quite grotesque. There’s a lot of overlapping dialogue and we often only hear snatches of conversations. The busy, often crowded frames give the film life too, but the sound design is certainly not ‘realistic’. It’s clearly dubbed (recorded afterwards), so has a strange otherworldly quality to it and takes a fairly minimalist approach, where specific sounds are highlighted and accentuated among the clamour of dialogue.

The film in general has an otherworldly and strangely timeless quality. The black and white cinematography and unusual presentation means it doesn’t look like a film released in 1998. There’s nothing else like it outside of German’s other work in fact. With a mixture of bizarre comedy and some genuinely disturbing sequences (including a very graphic rape scene), alongside both surrealism and naturalism, it’s an eye-opening experience for the uninitiated. I can’t say I knew what was going on half the time and it has a relentless energy that’s exhausting, but the film simply needs to be seen to be believed. Directed with such a boldly original and uncompromising style, it’s a mind-blowing example of controlled chaos on screen. It may be difficult to follow and longer than it needs to be, but the intensely manic and surreal atmosphere keeps you spellbound if you let it. It’s certainly not for everyone, so not an easy recommendation, but I believe cineasts should all immerse themselves in German’s astonishing work at least once. 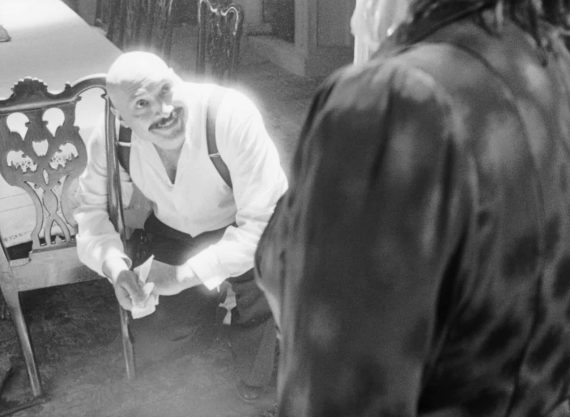 Khrustalyov, My Car! is out on 29th April on Blu-Ray in the UK, released by Arrow Academy. There’s a short section at the start of ‘part 2’ that looks a little rough and more aged than the rest, but, other than that, the picture and sound quality are first rate.

Now here is a disc that clearly advertises the importance and benefit of decent special features. As mentioned, the film can be difficult to get your head around, but the wealth of extra material here is more than enough to help you grasp German’s intentions. The commentary is a wonderful coverall, that I would highly recommend to anyone who found themselves baffled by the film. Zvonkine’s essay works in a similar way. The German interviews are a bit more heavy going, with the director proving as intense as his films and more than a little bitter at times (and rightfully so) due to the treatment his films have received over the years. Brent’s discussion of the Doctor’s Plot works in a different way, filling us in on the history behind the events around which the film is set. Like the commentary, it’s a must-listen to best appreciate the film.

So all in all it’s a superb package that fully does the film justice. Arrow should be applauded for giving it such a respectful and thoughtful treatment, on top of releasing the film at all.