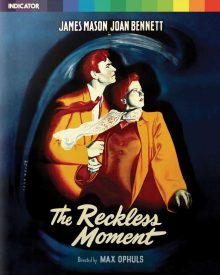 * Please note, this review contains some spoilers, so those who haven’t seen the film might want to be cautious. I’ve put a *SPOILERS* mark next to offending sections.

Max Ophüls was one of a number of German directors who moved to Hollywood following the rise of Nazism and development of WWII. His transition was later than most of his notable contemporaries though. This is partly because his move was gradual, living in France for a couple of years first, then briefly living in Switzerland and Italy before eventually leaving Europe for America in 1941. His career took a while to get going in Hollywood too, not landing a directing job until 1946 when long-time fan Preston Sturges got him a gig helming the crime drama Vengeance. This project was a disaster, with producer Howard Hughes firing Ophüls before rattling through another handful of directors, delaying the film’s release until 1950. He did manage to move on soon after though, making the Douglas Fairbanks Jr. vehicle, The Exile. This was a bit of a flop at the box office, as were his next two releases, Letter From an Unknown Woman and Caught (a.k.a. Wild Calendar), so Ophüls was not enjoying much success in the States.

However, he supposedly did have a reputation among many critics and fellow filmmakers, the younger ones in particular, as being extremely talented and unique. So he was hired to make one more Hollywood film, The Reckless Moment, before moving back to Europe to make some of his most highly regarded films. He was not producer Walter Wanger’s first choice to direct The Reckless Moment, but was cheaper than their preferred director and made the film his own. Like Letter From an Unknown Woman, it performed badly at the box-office but has later become highly regarded. Powerhouse Films have polished it up and collected several extra features together to release it on Blu-Ray in the UK, so I thought I’d see how it held up, particularly after I was so enamoured by Ophüls’ Le Plaisir, which I reviewed a year or two ago. 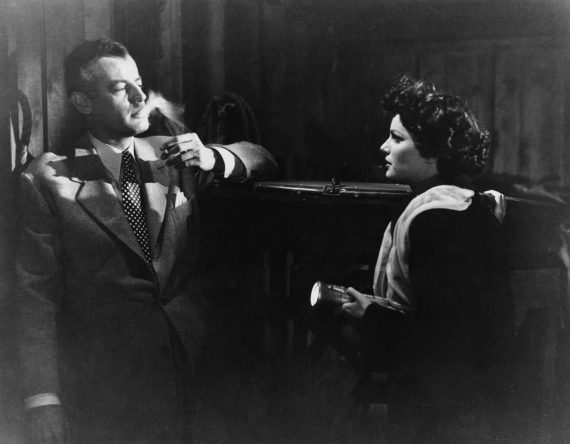 The Reckless Moment is based on a Ladies Home Journal story ‘The Blank Wall’, written by Elisabeth Sanxay Holding. It opens with mother-of-two Lucia Harper (Joan Bennett) boldly heading into town to confront the unpleasant character Ted Darby (Shepperd Strudwick), who her daughter Bea (Geraldine Brooks) has been seeing. Lucia asks Darby never to see her daughter again and when he offers to do so for money, Lucia swiftly heads home to tell Bea how much this man truly cares about her. Bea initially doesn’t believe this, but in an unpleasant meeting with Darby in a boathouse she learns the truth and accidentally kills the man whilst trying to escape his lecherous advances.

Lucia discovers the body in the morning and proceeds to cover up the crime, to protect her daughter’s future. However, a gangster named Martin Donnelly (James Mason) soon appears with love letters from Bea to Darby. He, or rather his boss Nagel (Roy Roberts), threatens to give these to the police if Lucia doesn’t give him a large sum of money. She’d be willing to do this to cover up the crime, but doesn’t have personal access to any money. It’s all either in joint accounts or in her husband’s name and he’s away long term on business and Lucia doesn’t want to get him involved anyway. Things aren’t looking good, until Donnelly finds himself falling for Lucia.

What really stood out in The Reckless Moment for me, was its forward-thinking and thought-provoking depiction of women, particularly mothers. Like I’ve mentioned in another couple of film noir reviews recently, the mass entry of women into the workplace during the war led to a lot of films dealing with the seismic shift in gender roles and unease felt by men when they came back to discover this. Largely the films presented us with a femme fatale character – a woman who can’t be trusted and smoothly takes what she wants from the men around her. Here, however, Ophüls has a female lead (ignore Mason’s first billing on the posters, this is Bennett’s film) that is having to deal with a tough situation herself on top of managing her usual role as a mother. Frequently we see Lucia telling off her son for being half-dressed or quickly doing household chores before getting on with the more dramatic matters at hand. *SPOILERS* As such, it feels like quite a feminist film, although disappointingly it’s a man who comes along to ‘save the day’ so to speak. 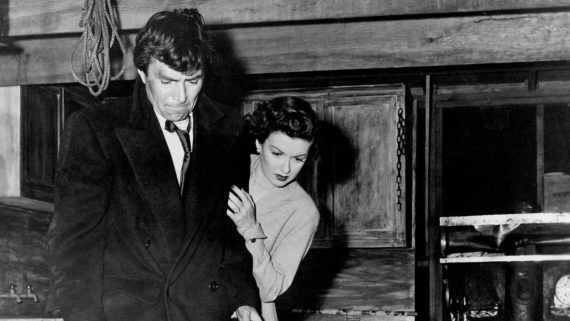 *SPOILERS* At first I thought the very ending where Lucia barely holds back the tears on the phone to her husband betrayed the feminist leaning of the film too and offered a happy ending, but thinking back and after watching the various special features on the disc, I realise it’s not the case. The film portrays Lucia’s home life as suffocating and although her family is legally in the clear at the end, she’s still trapped in her marriage and maternal role, which is made particularly more tragic after the man she falls in love with sacrifices himself for her. *END OF SPOILERS*

Speaking of love, the aspect of the film I did have a problem with, was the development of the central relationship between Lucia and Donnelly. I didn’t buy into the latter turning from the former’s tough blackmailer to her wannabe suitor, particularly as she wasn’t being particularly warm to him. I guess you can argue that he sees her entrapment as mirroring his own life trapped as Nagel’s stooge (which is alluded to in a key dialogue scene between the pair), but personally I didn’t feel there was enough motivation. That’s not to detract from two great performances though (ignoring Mason’s wavering Irish accent).

The drama is refreshingly restrained too. It’s a potentially melodramatic story, but characters only get hysterical briefly and when called for. Lucia in particular keeps her calm for the most part, playing the character as quite cold, but with a devotion to her family and hints of her dissatisfaction with matters to keep us on her side. Her restraint makes the eventual cracks that appear at the end ever more devastating too.

Although, due to budget restraints and studio interference, Ophüls was prevented from being quite as extravagant with his trademark long takes and dolly/crane shots as he’d liked, there’s still some wonderfully constructed mis-en-scene on display. There are some particularly impressive long moving tracks through Lucia’s house that effectively display her hectic and claustrophobic life there. 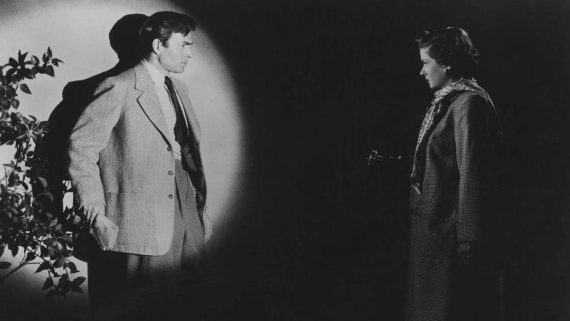 Ophüls directs the thriller aspects of the story with great skill too. Most notably, the scene where Lucia disposes of the body is impressively staged. Running in near silence, other than the lapping of the waves, it’s an incredibly tense scene, played out in the open in broad daylight.

Overall then, it’s a fairly unique and bold tale of maternal instincts and frustrations that makes for an intriguing and thought-provoking watch. With a great use of elegant camera movement, sound and restrained drama, it’s a fine piece of filmmaking that grips through its relatively brief running time.

The Reckless Moment is out on 22nd April by Powerhouse Films on Blu-Ray as part of their Indicator label in the UK. The picture and audio quality are both fantastic.

The extras here are superb. The Bacher and Haynes pieces offer plenty of valuable information about production and thoughtful critique. The ‘Focus on Mason’ present a lengthy discussion of the actor’s career, strengths and weaknesses. Again it’s thought-provoking and a must-watch for fans of the actor. The quality of Indicator’s booklets can never be underestimated either, with several essays, interviews and period reviews filling in any gaps left in the video extras.