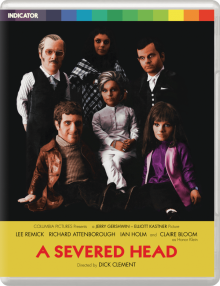 Director Dick Clement, better known for his writing work on The Likely Lads, Porridge and Auf Wiedersehen, Pet, follows up his first feature Otley with an adaptation of Iris Murdoch’s much-loved novel, about how monogamy isn’t exactly for everyone.

A Severed Head has more love triangles than even a Young Adult novel reader can handle. This tale chronicles the adventures of a group of middle-class Londoners in the 1970s. With so many pairings you will need to bear with me as I try to break down the plot for you… Martin (played by Ian Holm) is in a very unhappy marriage with his wife Antonia (played by Lee Remick). How unhappy you ask? Well unhappy enough to be having an affair with Georgie (played by Jennie Linden). But, Martin is aghast to find out that all the while Antonia has been having her own affair with their best friend Palmer (played by Richard Attenborough).  The twists do not stop there my friends as Antonia and Martin find out that Palmer is in fact also fooling around with his mysterious half-sister Honor (played by Claire Bloom). From there on in we are into a tangle of bodies and pairings as this group try to work out what they really want from a partner and themselves.

If you had time to watch 1960s and 1970s comedies (usually on a Sunday afternoon) you will know what to expect with A Severed Head, though it has to be noted that it is a little raunchier than those films. Ranging from satirical to farcical at times, the film has many decent laughs and you do start to wonder which characters will pair with each other by the end of the film. Clement was lucky to cast such a strong group for the film as they are able to perform beyond what they were given in the script.

Remick’s performance is strong and there is the hint that she used more of her character’s nuances from the novel than from the script due to how fleshed out she appears to be. She provides the type of performance you would expect from someone of her calibre and I think it was sorely needed to have her character be the heart of the group. Linden as Georgie perhaps doesn’t get as much time to show her prowess as an actress to help enhance the film and that is a shame seeing as she was just coming off Women in Love. 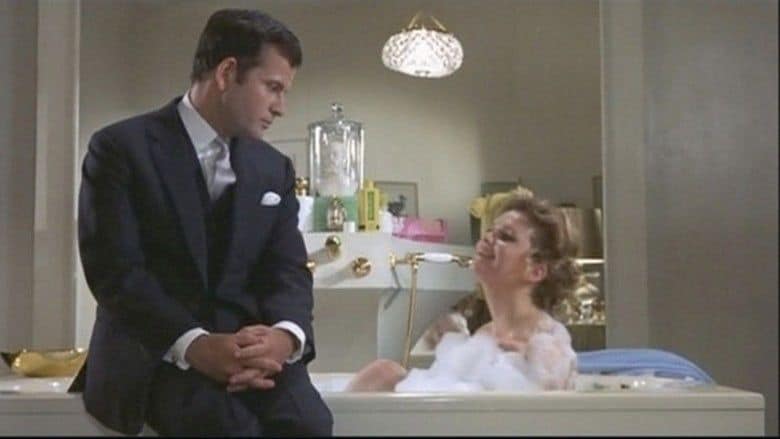 Attenborough gives a very fun performance as the antagonist throughout. Many people will always see him as the good-natured John Hammond from Jurassic Park, but those who know, know that he was always very good at playing a bit of a villain such as he did in Brighton Rock. In A Severed Head however he settles between the two. Using his charm to enchant the free-spirited female characters to great success. The film, however, tries to centre on Martin (Holm) who has to try and walk the line of being endearing to the audience but to also show a side of his character that is conflicted about his wife having affair and how that affects his manliness. It is a tough one to do and rather interestingly Remick was able to do this more successfully.

There are issues with A Severed Head and they are pretty prominent. There is the underlying feeling that the writers only took parts they liked from the book, and not enough about the actual characters themselves as they really needed to be fleshed out so the audience can resonate in some way with them. Frustratingly, this could and should have been possible due to the short running time that the film ends up with. The audience should care about what is happening to this group even if we don’t agree with the reasoning with how fluidly they are interchanging partners. Yes, they are living that 1970s middle-class bourgeois life, but they need to be affable and only Remick’s Antonia provides this. Some facts about the characters are brought to our attention only to be dropped minutes later. If this was a modern film you would be forgiven for thinking it had suffered a major reshoot due to its inconsistencies. Throughout the film, the feeling remains that something is missing and that perhaps it has been rushed.

While still, an enjoyable harmless romp into A Severed Head has more positives than negatives, it is well worth the purchase when you add what Indicator always brings to the table (well, disc).

As with all of Indicator’s remastering, they have done another terrific job here and it is the star of the show, but for those who want a little more with their purchase, they will not be disappointed.

The audio commentary with director Dick Clement and film historian Sam Dunn is insightful, we find out why the figurines were used in the title sequence. It had been a large curiosity throughout watching the film as to why they were there. The three short featurettes are interesting and are not just used for filler like some Blu Ray releases slap on.

The main piece of this special edition release is the 32-page booklet which stages the entire life cycle of the story. It is a great addition and one that all film lovers would enjoy.