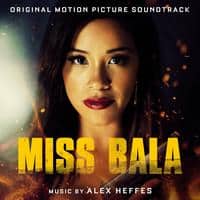 Miss Bala tells the story of Gloria (Gina Rodriguez), who finds power she never knew she had when she is drawn into a dangerous world of cross-border crime between the United States of America and Mexico.

The opening track ‘Gloria and Suzu’ begins with a lovely almost melancholic piece with an acoustic guitar to assist in making us aware of which side of the border we are in. A short synth sound enters the fray which combined with the guitar becomes Gloria’s theme. This softer track eases us into this work as the characters enter it. If you listened to this track before any other tracks from the soundtrack you could easily be mistaken for thinking that you were listening to a different soundtrack or easily believe you are in a different film to the one advertised thanks to the soundtrack, but Heffes isn’t an award-winning composer for nothing as he adds synth to make you realise that there is something going on beneath the skin.

With ‘Meeting Lino’ we are introduced with the villain of the piece and that is immediately made apparent with heavy synth and short sharp bursts of guitar. Instead of the light opening track, we now have a tense, almost uncomfortable feeling caused by a constant tapping beat. Already Heffes had my body want to curl up and protect itself from the unease. We don’t want to be around this person and I can only imagine how the visuals will help enhance this feeling.

The understated use of Latin percussion and guitar throughout the soundtrack makes you aware of where we are but doesn’t feel the need to force it upon your senses and, rather, weaves in and out when required. This is proven with an acoustic guitar seeping in and out in the track ‘Swapping The Sim’ and barely making its presence known in the next track. Heffes made a smart choice with this as other composers occasionally fall foul of relying too heavily on the surroundings (especially in Latino-based films).

While the overall soundtrack is very good (something you would expect from Heffes) I feel it excels most in between the action scenes, which is not to say that the action based tracks detract from the score. ‘The Bullring’ is one such track that I particularly enjoyed because it was different from the rest of the score as the majority of the track relieves all of the daunting pressure that has been building greatly over the previous 10 minutes.

Heffes brings in the guitars with gusto and the tight strings help rack up the tension until we burst with the fully evolved version of Gloria’s theme. It is bold and brimming with confidence showing what Gloria has needed to go through to become the person she now is and what being that person may mean for her in the future. Listening to this evolution spliced throughout the film we have to wonder what things she has experienced to have needed to grow in this manner. Heffes has mentioned that he wanted to convey how Gloria spreads her wings as a fighter and survivor with this evolution of her theme and wanted to assist in making the performance of Gina Rodriguez shine.

Overall Miss Bala’s soundtrack is very good which is to be expected of Heffes as I have very much enjoyed his work. By increasing the tension when required and keeping it there until it releases with the continually evolving main theme, Heffes has created a score that makes me want to watch the film right away. Sadly Miss Bala is not released until March 25th in the UK, but for those in the U.S. it is released on the 1st of February. I am actively excited to catch the film as I want to see how well it incorporates Heffes score and if a composer can do that, then they have been very successful.