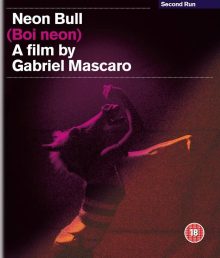 I usually open my reviews with an explanation of why I was drawn to watching the film. These days I’m lucky enough to pick titles I wish to review, so I go for films I’m genuinely interested in watching and I like to let readers know my personal approach towards that viewing. This ‘cherry picking’ might explain why my ratings tend to lean heavily towards the positive. However, now and again I’m sent a surprise disc by my various label/PR contacts. Often I’m too busy and set them aside or pass them to someone else to review, but now and again I find a free evening and think ‘why not?’ This was the case with ‘Neon Bull’. I knew little about the film, so when a press release was sent out a while ago I didn’t pay it much attention. However, when an attractively packaged copy landed on my doorstep the other week I figured I should give it a shot.

Neon Bull follows the lives of a group of bull wranglers, who work for a touring Brazilian rodeo troupe. They work hard in grim, filthy conditions and the sweltering Brazillian heat, but some have grander dreams. In particular, Iremar (Juliano Cazarré) has ambitions to be a tailor and is fascinated by fashion. He spends his spare evenings designing and sewing a dress out of material he finds lying around after a show. Other members of the team include the slovenly Zé (Carlos Pessoa) and Galega (Maeve Jinkings), a young woman bringing up her precocious daughter Cacá (Alyne Santana) in this tough setting. Later, Junior (Vinícius de Oliveira) replaces Zé, and his dedication to his looks (particularly his hair) seems to make Iremar jealous. 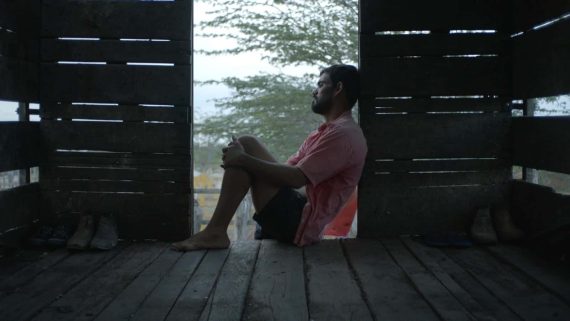 Throughout the film we watch the group get on with their lives with only a few noteworthy dramatic incidents. It verges on being an ethnographic film in terms of how little it relies on narrative and instead seems more interested in observing the group’s hard work. By allowing improvisation among the cast and mixing known stars with non-actors, there’s an inherent naturalism in the performances too which adds to the ethnographic vibe, even if it’s not a documentary by any stretch.

What makes the film interesting though (for me at least) is that it isn’t presented in a style more associated with naturalism. It’s gorgeously shot with occasional bold colours and long, fairly static shots, instead of the drab-looking shaky handheld camerawork too many filmmakers believe is required for ‘realistic’ filmmaking. Neon Bull is a truly beautiful film, yet manages to not feel artificially stylised, other than in a couple of surreal dream sequences. These are the most striking scenes in the film. One, shown on the cover, sees a woman perform a seductive dance routine with a horse’s head on hers, bathed in red neon light (although this may not be a dream as we see a repeat of it later with an audience). Another sees Zé, in a dim spotlit space, groom and caress a horse in a weirdly sexual fashion.

Speaking of which, the film is loaded with sexual symbolism, but not in a typical way. Instead, director Gabriel Mascaro mixes more frank and animalistic representations of eroticism and bodily functions. The bulls and horses in the film are often framed by the side of such symbolism or are figures of it, making it clear that Mascaro is making a statement about the animalistic nature of man. The bestial is also often mixed with the gaudy excesses of modern society to show that we may think we’re an advanced species, but we still shit, piss and fuck like animals. 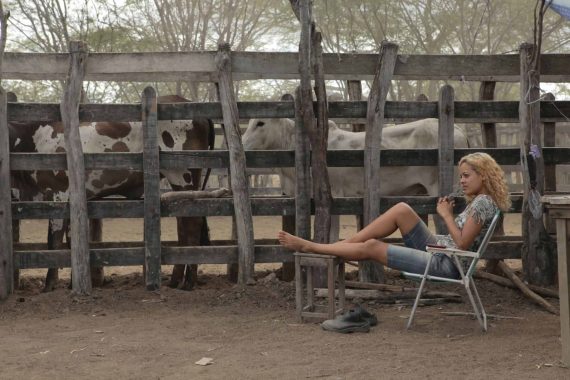 However, other than this comparison and the seemingly natural portrayal of a world little know outside of Brazil, I didn’t feel the film was saying much of interest. So it felt quite slight and meandering. Saying that, it never felt overlong or boring. I was drawn to its languid atmosphere, helped by its strange beauty, mixing naturalism with careful composition and wonderful use of colour. Maybe it’s more of a curiosity than a classic I’ll return to frequently then, but it’s certainly a unique film and one I’m glad I gave a chance.

Neon Bull is out now on Blu-Ray and DVD in the UK, released by Second Run. The picture and audio quality are superb.

The interview, ‘making of’ and booklet are all essential and help discover the director’s intentions and give a glimpse of the production process.