It’s been a long while, but Weekend of Trash is back! For the uninitiated, previous write-ups can be found in the category archive. We attempted one a couple of months ago, but a freak snowstorm cut it short, so we decided to try again and do it properly. With my family away for a week, we had the chance to go all out, with little faffing around and more movie watching!

So as before, here are the reviews of everything we watched over a weekend of gratuitous nudity, violence and downright nonsense. The reviews are only brief and ratings are largely based on entertainment value over quality, so take them with a pinch of salt. I’ve included clips and trailers when possible too.

This Brian Trenchard-Smith film sees Australian stuntman Grant Page play himself on a trip to LA to see his cousin who puts on a crazy stage show for a rock band. A foxy journalist comes across him and wants to feature him in an article and an upcoming starlet wants to learn stunts from him. And that’s pretty much the entire plot. It’s basically just a string of stunt scenes and rock concert footage featuring magic tricks and pyrotechnics.

Which is a good thing! Your mileage will obviously depend on how much you like stunts and your taste for late 70s metal, but we had fun. Featured band Sorcery are actually pretty good and the stunts are plentiful and awesome. What more could you want? A plot? Pfff… 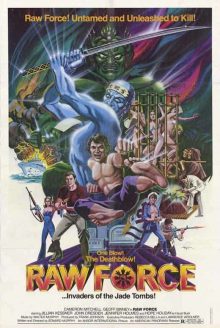 I’ve always been a sucker for films that throw in everything but the kitchen sink and this certainly fits that bill. Some kung-fu fighting mates travel to Warriors Island, where criminal martial artists were sent to die back in the day. Little do they know though that some cannibal monks live there who trade jade for women, who they eat to give them the power to raise the dead!They bring the dead martial artists back who cause trouble for our heroes.

So yeah, you’ve got kung-fu, zombies, nudity, gunfights and a bad guy with a Hitler moustache and a twitch in his eye. Nothing is taken seriously so it’s a hell of a lot of fun with very little downtime. Bonkers from start to finish, it’s perfect video weekend fodder. 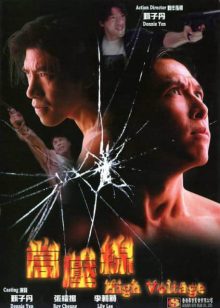 Stop me if you’ve heard this one before… A young Donnie Yen stars as a cop who doesn’t play by the rules. He’s sent to the Philippines to stop a mobster who killed his wife. He’s partnered up with a more straight laced local cop who doesn’t like Yen’s attitude.

OK, it’s not the most original film in the world and it’s filled with further cop movie clichés not mentioned here like the shouty police chief. However, the film is slickly shot and energetically directed with plenty of top notch action sequences. There’s a lot of straight up gunplay, but Yen does get a lot of opportunities to show his martial arts skills and there are some car chases and explosions thrown into the mix too. So it was a solid and exciting experience even if I often felt a sense of deja vu. 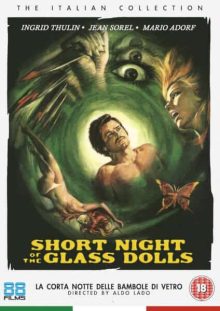 An American journalist is found dead at the start of this Italian giallo. Is he really dead though? He doesn’t have a pulse, but the audience hear an inner monologue that suggests the brain is still alive. As the journalist tries to ‘wake up’ before it’s too late, he desperately recalls what led him there in the first place. This begins a twisting tale of missing women and murder.

This is a classy, engrossing mystery with a wacky twist in its climax followed by a brutal payoff. The dead but not dead framing device is great too and keeps you hooked. It’s very nicely shot with some interesting and carefully framed angles as well as some bold splashes of colour. Also featuring a suitably creepy Ennio Morricone score, it’s a top tier but fairly low key giallo.

Stake Land II (a.k.a. The Stakelander) 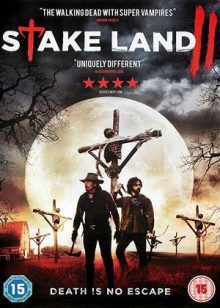 This straight to DVD sequel (not that the original ever made it to cinemas) is set 10 years after the first Stake Land film and Martin (once again played by Connor Paolo) sees his wife and daughter murdered by a powerful vampire known as The Mother (Kristina Hughes). Hell bent on revenge, he seeks out Mister (Nick Damici) for support.

This is not quite as fresh or effective as the first film, but remains a worthy follow up. The sombre tone is kept and it looks good, particularly for a straight to DVD title. If I wanted to nitpick found some of the cast and costumes a bit too pretty and clean cut for a post-apocalyptic wasteland, but that’s nothing to get too concerned with. 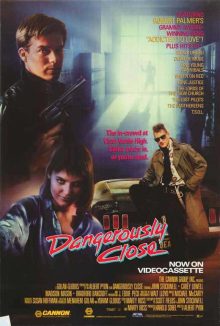 Albert Pyun directed this action thriller set in a high school where a group of students who call themselves The Sentinels doll out their own cruel brand of punishment on anyone stepping out of line. Danny (J. Eddie Peck), the editor of the school newspaper, befriends one of the members and gets brought within the circle. He learns the brutal truth behind the organisation though and must put a stop to it before his friends or even he himself is hurt or worse.

This was a tad slow perhaps (not helped by the fact we watched it at the end of a long marathon of movie-watching) and takes itself very seriously as it goes on, but it’s entertaining enough and slickly shot with a decent soundtrack. The first half, when there’s more goofing around between students felt more fun and natural, but the second half became a little tiresome as it went on. Still, not a bad little 80s high school movie and a fairly original one at that. 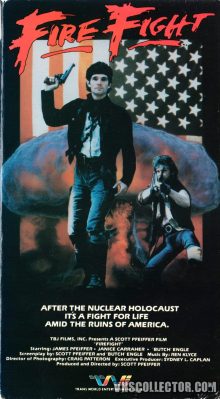 Things were going so well. All 6 films we watched on Saturday were decent, but then it all went wrong on Sunday morning with Fire Fight.

America is hit by a nuclear attack and among the survivors is a psychopathic businessman (James Pfeiffer) who sees the apocalypse as a chance to become a great dictator. He does this by employing the help of a group of escaped convicts and they roam the wilderness harassing everyone they come across. Meanwhile, the man’s ex-wife (Janice Carraher) is doing all right for herself, living with her grandfather in the mountains and coming across a wandering trader who she falls in love with. When the two groups meet it all goes wrong though, as you might expect.

This was the least convincing post-apocalyptic world I’ve ever seen. Everything looks normal and everybody seems pretty healthy and happy to eat fish they catch and drink from the rivers and streams. The film makes little sense in terms of plot too as characters make bizarre decisions. Why the hell does anyone choose to follow the crazed leader for one. New characters keep being introduced too, which makes things rather confusing. It’s just a big, shabbily made mess from start to finish. It’s vaguely entertaining for the first half, purely due to how silly it is, but after a while it becomes a chore. 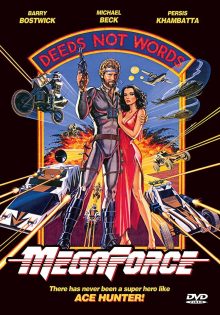 Barry Bostwick makes a surprising turn as the dashing lead in this sci-fi action adventure. He plays the leader of a special forces unit known as Megaforce, who are sent to stop the evil dictator Guerera (played by everybody’s favourite low rent villain, Henry Silva). Megaforce head out in their suped-up, rocket-firing motorbikes and dune-buggies to save the day.

Well this set us firmly back on track. It was perfect Weekend of Trash material. Very silly, full of explosions, hammy male posturing and ridiculously camp costumes, it’s very much a product of the 80s and all the better for it. Bostwick is having a blast in the lead role and Silva tones down his evil side to play a surprisingly friendly bad guy. It must have had a decent budget too as there’s a lot of real life hardware on display, with more than a handful of tanks, a couple of giant airplanes and all the explosives you can cram into a 90 minute movie. Add to that a flying motorbike finale and some brilliantly cheesy dialogue that never takes itself seriously, and you’ve got the recipe for one of the most enjoyable films we’ve ever seen in the near 15-year history of the Weekends of Trash. 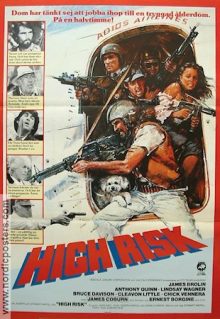 Four ‘average-Joe’ Americans (led by James Brolin) agree to head over to Columbia to rip off a wealthy drug baron (James Coburn) in order to get a shit load of cash and be free from their mundane poor lives back home. Of course they’ve taken on more than they can handle though and get in all sorts of trouble from the drug lord and his cronies, as well as from some Mexican bandits, led by Anthony Quinn.

This took me by surprise as the cover made it look quite tough and serious, but it’s actually more of a comedy action adventure, a little in the vein of Romancing the Stone. The film doesn’t shy away from the danger that the foolish men have let themselves in for though and there is a tough edge to it. Overall though, there’s enough humour to keep things fun and bouncing along. It’s got an amazing cast too, so it was a great finish to one of the most solid Weekends of Trash we’ve ever had. Hopefully there won’t be as long a wait for the next one.