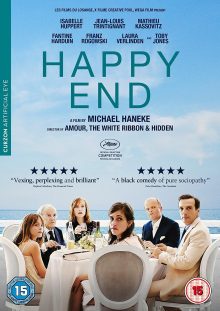 Michael Haneke is a force to be reckoned with in the art house cinema scene. He’s one of the small handful of directors to have won the Cannes Film Festival’s coveted Palme d’Or twice and his films tend to rake in critical acclaim wherever they go, particularly since the turn of the millennium (give or take a film or two). His work doesn’t tend to be all that audience-friendly though. He seems to enjoy giving viewers a hard time and it’s rare that his films don’t shock in some way. As such, approaching a new Haneke title can often be daunting, and his lofty art-house status makes the thought of criticising his work equally daunting to a lowly film blogger like myself. Nevertheless, a new Haneke film isn’t something to skip past, so I strapped myself in for his latest and had a pad handy to make my half-arsed notes.

Happy End concerns itself with the ever unfolding drama of the Laurent family, who live in Calais during the development of the refugee crisis. The Laurents are a privileged lot, buoyed by the success of the family’s construction business which is currently run by Anne Laurent (Isabelle Huppert). However, an industrial accident causes problems on that front, not helped by her troubled son Pierre’s (Franz Rogowski) poor handling of the situation. This proves to only be the tip of the iceberg when it comes to the family’s shortcomings though. Leading us into this world, and also central to some of the major drama, is Eve (Fantine Harduin), the 13 year old daughter of Thomas (Mathieu Kassovitz) who we witness giving her hamster and then mother an overdose of anti-depressants at the start of the film. With her mother in a coma, she’s forced to live with Thomas, who had moved out a few years ago and re-married. He struggles to reconnect with Eve and has his hands full with a newborn son and a ‘bit-on-the-side’ who he talks dirty with online. Meanwhile, the former patriarch of the family, Georges (Jean-Louis Trintignant), is slowly succumbing to dementia and wishes to end his life before it fully sets in. 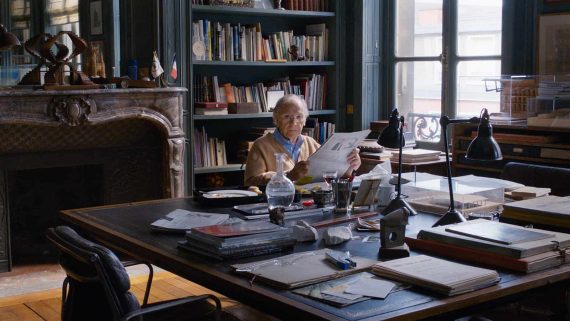 And so goes the strange twisted soap opera of Happy End. With quite a few central characters (I didn’t even list them all above), there’s quite a lot going on here, but the film never feels rushed or over-stuffed. It achieves this by often skipping over the potentially melodramatic moments, like an attempted suicide or the death of one character. Instead Haneke uses some of his tried and tested techniques, such as holding long, seemingly innocuous shots on a little longer than you’d expect or feel comfortable watching. This brings out a sense of unease and also gives you time to spot details that provide the importance of what you’re watching or sometimes help you make sense of what happened before or in between scenes. This style makes for a kind of episodic feel to the film, but by the time everything has played out it doesn’t seem fractured or randomly presented as a whole.

Keeping everything moving along is some fairly subtle but ever present black humour. As such, even though there’s a lot of dark subject matter being presented, it’s easier to watch than most of Haneke’s films. Much of the humour comes from the jabs he makes at modern society, particularly the use of social media and the bourgeois attitudes of the middle classes. Indeed, what looks like a grim family drama on the surface, is actually a satire of the current state of the ‘civilised’ world. The setting of the refugee crisis provides some political statements under the surface too. 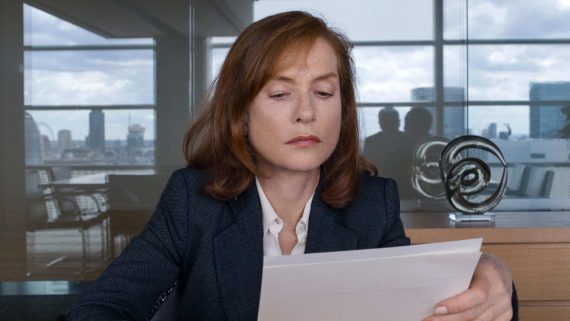 Haneke is perhaps hitting targets he’s aimed at before and using many of the same techniques, so you could criticise him for treading water, but his approach here worked a charm for me. Some have called it a ‘greatest hits compilation’ of sorts and I can agree with that. His attacks on social media, although often astute, can be a tad narrow minded though which could be down to the fact that Haneke is in his mid-70s now and might not be quite in tune with this modern phenomena. There’s a lot to take from the film though, so a few misfires or blunt attacks here and there are by the by.

As a whole it’s a brilliant and biting satire of modern existence. It’s a little rambling and episodic perhaps, but isn’t life? It’s rather cold and distant too, but this is to be expected from Haneke’s work and, particularly here, it’s kind of the point. With a thick, pitch black sense of humour pumping blood through the film, it’s darkly pleasurable to watch anyway. Add to that a cast to die for and the director employing his typical attention to detail and ability to shock and you’re onto a winner.

Happy End is out on Blu-Ray and DVD on 26th March in the UK, released by Curzon Artificial Eye. I saw the Blu-Ray version and the film looks and sounds perfect.

On the surface, this set of features looks disappointing, but what is included is excellent. The ‘making of’ is only 21 minutes long, but there’s a nice mix of footage of Haneke at work and some decent interview soundbytes. In particular, you get to hear some of the writer/director’s thoughts on the themes and fascinations within his film. The masterclass, as it turns out, is 90-odd minutes long, seeing the director deliver a dissection of his work to an audience, who also throw questions at him.