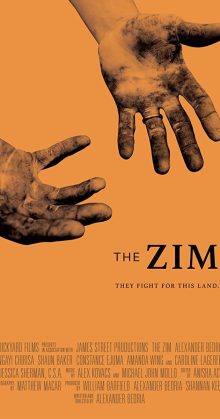 The Zim begins with a series of black and white stills with text over laid succinctly outlining the history of Zimbabwe; from British colonial rule through bloody civil war to independence in 1980, and the land seizures in 2000. It’s an efficient and apt way to set up the film; the text serving as a succinct summary for those not au fait with Zimbabwe’s history and the imagery suggesting that the issues are in one sense black and white and in another sense anything but.

The drama takes place in Zimbabwe in 2001 and is very much centered in this time and milieu, although the premise on paper is classic Hollywood Western fare. A farmer struggles to protect his loved ones from a violent gang in a seemingly lawless wilderness. Although here the gang are not marauding outlaws, because the ruling party and president backed them. At the first meeting between white farmer Daniel Silva and black gang leader Wilson Matonga one of the war vets gives Silva a legal order seizing his land. ‘Legitimate’, says Matonga nonchalantly. ‘I’ll be appealing this’ is the logical but impotent response from Silva. Both men know that there will be violence before long.

The film poses lots of questions, some of which the protagonists pose to each other. Questions of crimes committed by ancestors. Questions of what it is to call a land home. Questions of honour and dignity and friendship and loyalty. With issues so complex the only way to deal with them in a short film is to focus on the minutiae of a small group of people over a short space of time, and The Zim does it superbly. The performances are generally strong, the cinematography is excellent and the music and sounds design are superb.

At a time when the nonagenarian President Mugabe is standing for re-election in 2018 this film is a timely reminder of his dreadful premiership and the human cost of divisive policies.