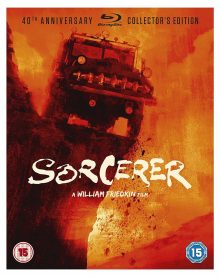 Remaking a classic film is often considered sacrilege and, as such, critics and often audiences react with scorn when anyone attempts to recreate the magic of a well-loved title. As was the case with 1977’s Sorcerer, which was director William Friedkin’s take on Henri-Georges Clouzot’s Wages of Fear. Hot on the heals of the immense critical and commercial success of both The French Connection and The Exorcist, Friedkin seemed unstoppable, but Sorcerer was hammered by critics and didn’t find much of an audience either. Star Wars came out a month prior, so obviously cinema-goers were in the mood for something other than a tough, cynical thriller. 40 years later though, Sorcerer has gradually developed a reputation as a bit of an underappreciated classic. So much in fact that it’s been given a wonderful restoration job recently and is hitting select UK cinemas and Blu-Ray. I hadn’t seen the film before, and, being a fan of the few Friedkin films I’ve seen, I was keen to check this out. The timing was great too as the BFI re-released Wages of Fear on Blu-Ray only a couple of weeks ago and Andrew reviewed it here – https://blueprintreview.co.uk/2017/10/the-wages-of-fear/

Sorcerer takes Georges Arnaud’s 1950 French novel Le Salaire de la peur (on which Wages of Fear was based) and sets in present day South America. It is in a small backwater village here that four desperate men from all around the globe have been forced to settle. Nilo (Francisco Rabal) is a Mexican assassin sent to the village on a job, Kassem (Amidou) is an Israeli terrorist hiding out after a bombing, Victor Manzon (Bruno Cremer) is a French businessman who was caught embezzling funds so fled and Jackie Scanlon (Scheider) is a New Jersey criminal on a mobster’s hit list, after stealing money from a church bingo fund controlled by the Mafia.

These men, at the end of their tether, end up taking a near-suicidal job. An American oil field has been sabotaged and the foreman wants to close the leak and put out the resulting fire using explosives. The only explosives he has access to are some old sticks of dynamite that have been improperly stored so the nitroglycerine has leaked and is extremely volatile. The foreman needs four drivers to transport the boxes of explosives a fair distance across incredibly rough and dangerous terrain in a couple of beaten up old trucks. Any notable bump or impact could blow the trucks sky high, so few workers are interested in taking the job, but the fore-mentioned group are all either desperate for the payout to get a semblance of their old life back, or have nothing left to lose. Thus begins a perilous drive through whatever the jungle and their own clashing egos can throw at them. The only way these men, who are as volatile as the explosives, can survive is by working together and trudging on. 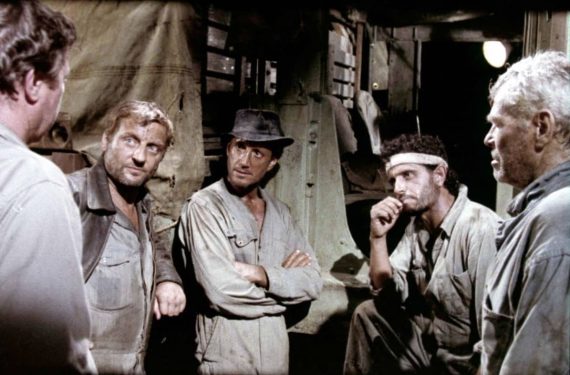 I’ve seen Wages of Fear and liked it a lot, so I did feel an element of worry when approaching Sorcerer, despite the strong reputation Friedkin’s film has enjoyed in recent years. It’s been a while since I’ve seen the earlier film though, so it was harder for me to directly compare the two versions and I was able to sit back and enjoy this occasionally brash, but utterly thrilling take on Arnaud’s novel.

Much like Wages of Fear, one of Sorcerer’s biggest selling points is its series of tremendously tense set pieces. Once the men hit the road (if you can call it that), the film never lets up in delivering a nail-biting, arse-clenching experience. A sequence following the two trucks across a rickety old bridge in a tropical storm is particularly exciting. Friedkin makes good use of the elements throughout the film too, forcing the audience to feel the heat of the oil field fire or get battered down by the force of the brutal rains.

It’s a hot, sweaty, macho film. The few female roles in the film are brief and of little consequence to the narrative. It’s all about desperate, lost men who will face death just to prove they are worth something. The film is so manly, there’s even a tooling up montage as they pimp out their trucks before heading out. With scenes like this and a synth-heavy (but effective) score by Tangerine Dream, the film threatens to feel a bit ‘of its time’, but in using largely remote jungle locations and practical effects, it doesn’t feel as dated as most action thrillers of the era.

Relationships between the men during the mission are possibly better handled in the original from what I remember, but their backstories are much more fleshed out here, with most of the whole first half of the film taken up by them. It helps you appreciate why they’d take on such a job and makes for a richer overall experience. The second half is pared down and sparse though, like the original. The casting is great too, with Scheider and Cremer impressing in particular. 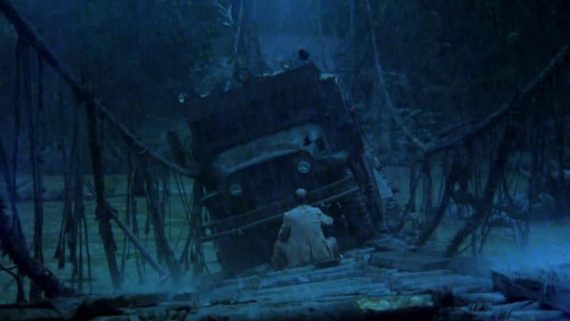 Coming after two box-office behemoths, Friedkin had tonnes of cash at his disposal for Sorcerer and it shows. The film looks expensive and lavish – there are lots of disparate locations in the first half, some huge sets built out in the jungle, and plenty of practical effects to show the trucks battling through harsh weather and shoddy roads/bridges. It all looks authentic though – by lavish I don’t mean expensive-looking costumes or sets. A lot of money has been spent to make a tough, gruelling and experience that feels natural. There’s a wonderful sense of location achieved through superb production design and gorgeous photography too.

All in all, it’s a gripping recreation of a classic, that’s near manically thrilling at times. You could call it overblown perhaps, but in my opinion it’s all the better for it. Taut, tense and magnificently well put together, it’s a big, brazen action classic, that deserves to be put on the same pedestal as Friedkin’s better known work.

Sorcerer is out on 6th November on Blu-Ray in the UK, released by Entertainment One. The transfer is superb, delivering a clean, detailed picture with vibrant colours and an attractive, natural grain. The audio sounds great too.

There’s only one video extra, but it’s an impressive one – a 74 minute conversation between William Friedkin and Nicolas Winding Refn. Both directors are known for their ‘strong personalities’ to put it mildly, so it can be a bit of an uncomfortable watch and they spend much of the time bickering. However, it’s a fascinating pairing and Friedkin doesn’t hold back in some of his opinions. I’d have preferred to hear more about the production process though to be honest. According to press material, the set is also supposed to contain The Mystery of Fate – A letter from director William Friedkin, but that wasn’t included with my screener.