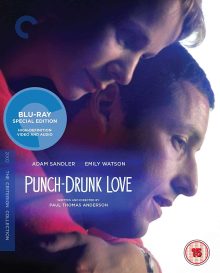 When did PT Anderson become a great director? Everyone will have their own answer, and some may still insist he isn’t, but there’s got to be a strong case for Punch-Drunk Love. With his first three features, Hard Eight, Boogie Nights and Magnolia, he had already built an impressive body of work, but it would be hard to argue he had found his own path. This was ground Robert Altman had already covered, albeit with a more bitter, misanthropic sensibility. It sounds like Magnolia in particular was hard work to make, so Punch-Drunk Love was supposed to be a lighter, more straightforward experience. It may have been that, but the results were new and thrilling and appear to have freed Anderson to make the equally (?) unexpected There Will Be Blood.

Punch-Drunk Love is partly based on the true story of an American man who exploited a promotion loophole to claim a lifetime of Frequent Flyer points by purchasing a few thousand dollars of chocolate pudding. The real driving force of the film, however, is Anderson’s engagement with Adam Sandler’s star persona. One of the bonus features on this Criterion blu ray shows the collected journalists at a Cannes press conference struggling to comprehend what a respected director like Anderson could have seen in Sandler’s output. Anderson replies, “I absolutely think he’s the greatest,” and Punch-Drunk Love is clearly the work of someone who has given Sandler a great deal of thought. What, it asks, would really cause a person to behave the way Sandler does in his comedies, wildly switching between bashful sweetness and explosive anger? To find answers, Anderson takes us deep inside the subjective experience of Sandler’s character Barry Egan, a novelty plunger manufacturer with emotional problems. 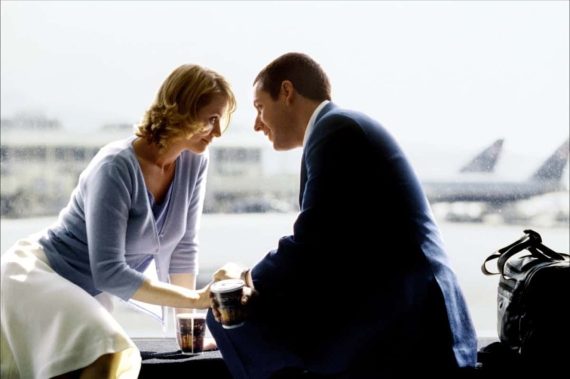 Barry is a loner with seven sisters. After a childhood of constant teasing and intrusive interest, he’s painfully self-conscious and private. Barry finds day-to-day interactions with other people difficult, and his family almost impossible. Occasionally it all gets too much, resulting in spectacular, property demolishing rage. When we first meet him, Barry is just about keeping it together: his business is moderately successful and he’s spotted the pudding loophole. But then, in quick succession, two events send him into a spiral: he meets a woman, Lena (played by Emily Watson), with whom he has a connection, and he becomes the blackmail target of an unscrupulous phone-sex operator (Philip Seymour Hoffman). In different ways, both threaten his carefully constructed life and Barry finds himself increasingly pulled out of his (dis)comfort zone.

What really sets Punch-Drunk Love apart is Anderson’s willingness to innovate in bringing us into Barry’s journey. Barry is like a raw nerve and this is reflected in the both visuals and sound design. Contrast is pushed to extremes, with bright colours and glaring light. Scenes are punctuated with throbbing sequences of Jeremy Blake’s abstract art, as if we’re witnessing the shape of Barry’s emotions. Jon Brion’s score is laid over everything, shifting from arrhythmic percussion to soaring melody as scenes require. Early on, Barry comes into possession of a harmonium and his improvised compositions meld with Brion’s themes, further blurring the line between what is inside or outside Barry’s head. It can all be deeply uncomfortable, but also very funny and romantic. The cast commit completely. Watson sweeps through the film with breezy confidence, as Lena takes her time to reveal she may be just as unconventional as Barry. Hoffman is hilarious and intimidating as Barry’s tormentor. Sandler is simultaneously exactly the same as always and yet completely unrecognisable at the centre of it all. In the Cannes press conference, Anderson also states “I hope it’s not a continuation of Magnolia. I hope that it’s really, really different.” Punch-Drunk Love not just a break from his earlier films. It’s like nothing else out there. 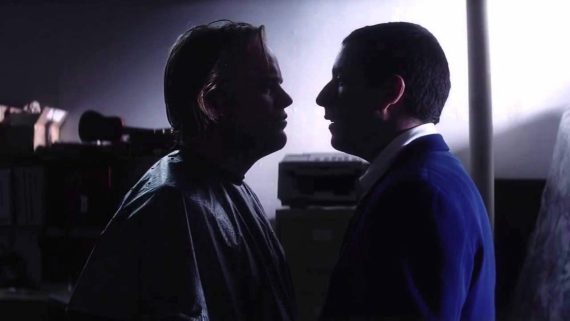 Regarding extras, the company has done everything they possibly could without the participation of P.T. Anderson (who did, at least, supervise the transfer). All the extras from the DVD are back: two deleted scenes (both good, but only repeating the film’s themes), a variety of experimental shorts combining bits of the film with more of Jeremy Blake’s art, three very different trailers and an amusing outtake where Philip Seymour Hoffman really seems to hurt himself.

New for this release are a Cannes TV interview and press conference, a five-minute NBC interview with the actual pudding guy, a 30-minute newly filmed interview with Jon Brion and a new 20-minute conversion between gallerist Lia Gangitano and curator Michael Connor about Jeremy Blake. The Brion interview is the pick of this material by some distance, as he describes his collaboration with Anderson in illuminating detail. The pudding guy is fun, and the Blake conversation is informative and fantastically pretentious. The Cannes footage suggests Anderson prefers not talking about himself, but does give insight into the close, apparently hilarious working relationship between the principals. All are worth your time. The final release will include a booklet with an essay on the film by Miranda July, but this wasn’t provided for review.