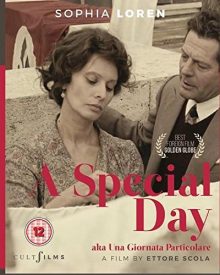 CultFilms’ second release heralding their entry into the boutique home entertainment label scene, after Two Women, is A Special Day. Another Italian award-winner starring Sophia Loren, yet otherwise quite a different film, A Special Day is a 1977 period drama directed by Ettore Scola. I must admit I hadn’t heard of it before being offered a screener to review, but looking the film up, it seemed to have received fantastic reviews and was deemed strong enough to be included as part of the Criterion Collection, so I figured it must be worth a shot.

A Special Day, as the title suggests, is set over one day in Rome in 1938 – the day Adolph Hitler arrived in the city on his visit to Italy, which was still a fascist dictatorship at the time (and WWII was yet to kick off), so the German dictator was hugely popular in the country. After a newsreel introduction setting the historical scene, we are introduced to Antonietta (Loren) and her family. The tired housewife has six children and an ungrateful husband (John Vernon), who are all preparing to join the huge parade in honour of Hitler’s visit to the city. They all rush out the small apartment, along with most of the inhabitants of the block of flats, leaving Antonietta to tidy up after them and trawl through her usual list of household chores. When the family’s pet bird escapes out the window and lands outside a neighbouring apartment though, Antonietta heads over there to try and catch the bird, seeing that the inhabitant has also stayed at home during the celebrations. 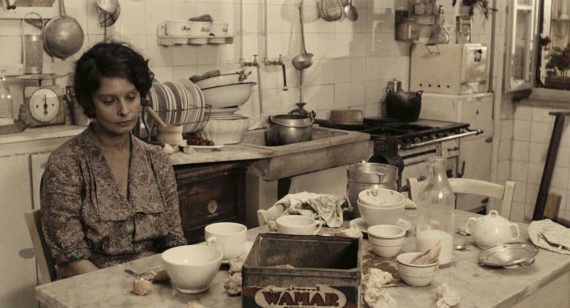 The neighbour is Gabriele (Marcello Mastroianni), a persecuted ex-radio presenter who is contemplating suicide. Antonietta’s arrival brightens his mood though and he tries to keep her from leaving him alone. She’s reluctant at first, nervous about what the neighbours would think of her fraternising with a man other than her husband, but soon warms to him, glad to be distracted from the drudgery of her day to day life. As the two get to know each other better we discover an important difference of opinion as well as a revelation as to why Gabriele is so troubled

It’s an incredibly low-key film, largely only featuring Loren and Mastroianni and never leaving the apartment block (other than in the newsreel footage at the start), although it ventures onto the roof at one point. As such it’s a character piece more than a narrative-driven film. It remains compelling though through the strength of its filmmaking.

It’s beautifully directed, with Scola crafting a sensitive portrayal of two hard-done-by souls. He creates some strong visual symbolism, for example creating barriers between characters in his frames at suitable moments of conflict. It’s a gorgeous looking film in general, with Scola and cinematographer Pasqualino De Santis employing some wonderfully elegant camera moves and a colour palette so muted it’s almost monochrome.

Elegant is the perfect way to describe the film in general. Although set during a troubling time in history and depicting unglamorous working class life alongside persecution, the film presents its story and characters with grace and subtlety throughout. The two lead performances are exquisitely delivered too, even in Mastroianni’s wilder moments as he rides a scooter around Loren’s apartment. 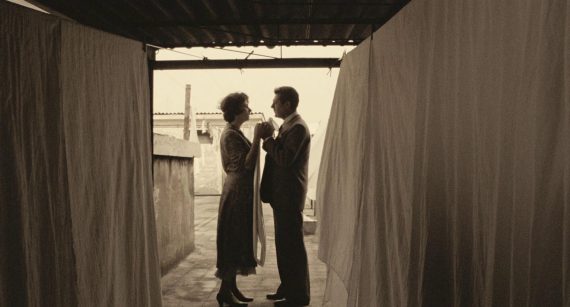 As you’d expect, given the setting, there is much political substance too. My knowledge of world history is pretty poor so much was lost on me, but through the film’s setup and my high school history lessons I knew enough to appreciate the problems faced by Mastroianni’s character and how that might mirror Loren’s situation. The radio broadcast of Hitler’s parade runs throughout the film and this offers an occasionally quite ironic commentary to actions on screen in the apartments, delivering further depth.

It was maybe too low key to really blow me away, not helped by some of the substance being beyond my knowledge of the time and place. I wasn’t wholly convinced by the climax to the two characters’ relationship either, although the poignant finale and coda make up for this.

Ultimately though, it’s a little known gem that I’m glad I came across. Effortlessly beautiful in execution, it’s a quiet and subtle film with layers of political and emotional depth despite the seeming simplicity of its narrative and presentation.

A Special Day is out now in the UK, released by CultFilms on DVD & Blu-Ray. I saw the DVD version and the picture and sound quality were both very good, particularly considering the film and its lengthy extra features are contained on one disc. Both the original Italian soundtrack and English dubs are included too. Personally I would never even consider watching a film like this dubbed, but there might be some out there that would, so it’s nice to have the option.

There are two feature length documentaries included on the disc – one called ‘Ridendo E Scherzendo’, which looks at the life and work of the director and another called ‘Sophia, Yesterday, Today and Tomorrow’, which focuses on the legendary actress and is framed by a lengthy interview with the woman herself. I haven’t had time to watch either of these in their entirety yet, but I intend to as soon as I can. From a brief skim they look to be rich, insightful and contain interviews with a wide range of respectable and well known stars and filmmakers, so seem like very valuable additions to the film.