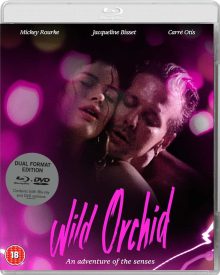 Set in colourful, but sweaty Rio de Janeiro, Wild Orchid plays out more like a long-play softcore music video rather than a feature film of any substance. While the general ambiance is exotic, I wouldn’t agree with the rest of the press release which declares it as a ‘hypnotic odyssey that will leave you breathless and spellbound’. I would rewrite that and say something like ‘a dreamlike snore-fest that will leave you feeling sleepy and rather disappointed’!

Beautiful young attorney Emily Reed (Otis) is sent by her new employer to Rio to work with international negotiator Claudia Lirones (Bisset) on a multi-million dollar deal. During the second day there the two of them head out to a construction site and when Claudia is suddenly called away on business elsewhere Emily wanders off in the direction of a derelict hotel (as you do) for some nosing around. When she comes across two hot and steamy Latino lovers getting it on under a burst water pipe (probably full of Hepatitis A) it turns her on majorly, which in turns makes her feel uncomfortable with herself (being a good girl) and, feeling utterly ashamed, she runs away.

Later Claudia asks her to fill in for her and to meet up with a long-term client, Wheeler (Rourke), as she’s got to fly off to finalise another deal – ‘cause she’s just soooo important! Emily reluctantly agrees to step into Claudia’s new evening dress and shoes (which amazingly fit perfectly) and meets up with the mysterious, very rich and powerful James Wheeler. 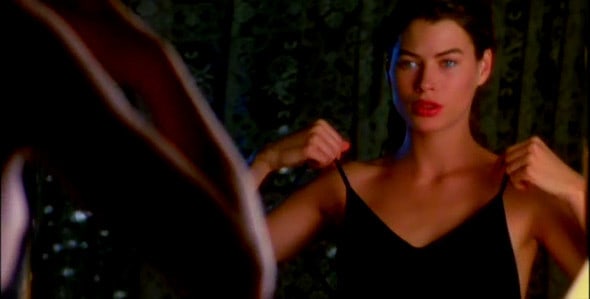 It’s clear, from the off, that they’re both wildly attracted to each other physically – well, let’s face it, both actors we’re gorgeous back then, even Rourke, who now looks like a plastic freak – so it is just a case of them bonding together on a more spiritual level before the inevitable happens – which it does, totally predictably.

Wheeler then puts the naive Emily in all sorts of weird, pretentious situations since he seems to enjoy seeing her ill at ease. As she gets to know him it turns out that this former orphan from an urban ghetto is unable to handle any kind of serious connection with another human being and he is revealed to be a voyeur of sorts, using other guys to turn Emily on physically. Well, at least until his testicles explode with unappeased desire and he finally does the dirty with her! Yes, I made the exploding testicle bit up, but you get the picture…

The main problem with Wild Orchid is that it clearly has no idea as to who it is aimed at. It’s way too mainstream and coy to appeal to the raincoat brigade, but is a bit too reliant on eroticism as its reason for being to satisfy the general movie-goer who wants to be entertained and to appreciate a good story, well-told. So what we have here is a film that struggles to really satisfy anyone; apart from Rourke and Otis who ended up getting married in real life a while later… 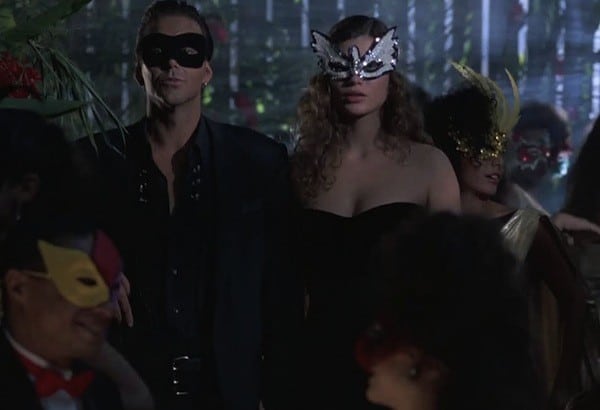 The film was panned by critics when it first came out and lead actress Carrḗ Otis was apparently voted worst newcomer by some sort of film poll. However, to be fair on her, apart from a few scenes early on where she clearly looks really lost at sea, she just about manages to convince in her role as a sexy, naïve youngster who is suffering the ‘stranger in a strange land’ syndrome big-time, so I think the critics of the day were a little harsh. She certainly meets her main function, to serve as a sensual and beautiful centre point around which all the men flutter like moths circling a flame.

Mickey Rourke, on the other-hand, gives a bizarre performance of a man with more money than sense who likes to play mind-games with pretty much everyone he meets, just because he can. I would have loved to have been a fly on the wall listening to director King’s instructions to him, whatever they were!

Jacqueline Bisset is good fun in a pretty thankless task as the batty, but strangely endearing business woman who brings the two central characters together. She looks like she’s having a good time, unlike most of the rest of the cast, and comes across like a rather batty aunt.

Wild Orchid is a frustrating film to watch since it had so much potential that it then just does nothing with. It’s not so much a bad film as a disappointing one; in some ways I would have preferred it to have been an all-round disaster that I could have just laughed at, instead of something that’s so decidedly average. 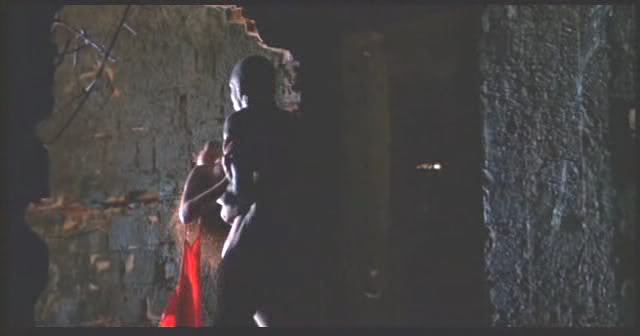 So, in a nutshell, if you like your films filled with beautiful people, in lovely locations, wearing shoulder pads that prevent them from walking normally through doorways; films that feature lots of pointless slow-motion shots of sexy people dancing or screwing, all swathed in dry ice, then Wild Orchid is probably for you; probably…

Eureka Entertainment are distributing Wild Orchid on DVD and Blu-ray. It’s a shame that the only extras on the disc are the original theatrical trailer (2 mins), which wisely plays up the eroticism in exotic climes angle, and, more significantly the shorter R – rated version (105 mins). I would have loved to have seen some sort of making-of documentary on this film, with some interviews with the key people involved.