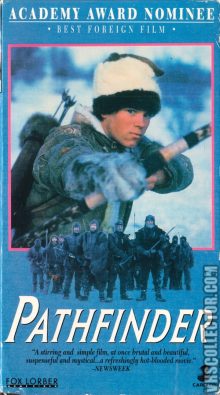 Pathfinder (or to use its native Norwegian title Ofelas) racked up a fair number of international awards on its original release and was even nominated for Best Foreign Film at the 1988 Oscars. It was successful enough in fact to land its writer/director Nils Gaup a job directing a big budget live action Disney adventure, Shipwrecked, a couple of years later. So it’s sad to see it has disappeared into obscurity over the last 28 years. Funnily enough I got sent a press release for Gaup’s most recent film, The Last King, this week. So at least it’s nice to see he’s still in the business as I quite enjoyed Pathfinder (I’ll ignore the fact I slated his family Christmas movie from 2012 though, entitled Journey to the Christmas Star).

Set in Lapland around 1000AD, Pathfinder opens with the massacre of a peaceful family by a horde of evil pillagers known as the Tsjuder (or Tchude ). The teenage son of the family, Aigin (Mikkel Gaup), was out hunting at the time, arriving back home just as the Tsjuder are finishing up. He’s spotted by them, but manages to escape, albeit a bit battered with an arrow in his arm.

The weakened Aigin arrives at a neighbouring village and the people there patch him up, but when they hear what happened they are worried that his tracks will lead the Tsjuder to their home. Aigin claims he covered his tracks, but the people don’t want to take the risk and choose to abandon their homes and flee to safety. A couple of men stay with him though, to face the enemy and stop the Tsjuder.

I had one major issue with Pathfinder and it’s sadly a problem with most world cinema titles released on VHS back in the day – it has been dubbed! Now I can just about live with animated titles getting re-dubbed in English (although I still always prefer the original language) and it’s occasionally part of the charm of cheesy martial arts movies. However, when a live action film is to be taken seriously, it’s horribly distracting to hear an obviously different voice coming from the mouth of an on-screen character. This distraction is heightened by the fact that the voice performances are generally terrible. It’s a practise I never understood, but was unfortunately the norm for home video releases back in the day. Thank God for the multiple language options we get on DVD/Blu-Ray now.

The dubbing here really spoils any scenes of dialogue, particularly some mystical segments and scenes set in the village away from the fighting. However, a lot of the film is dialogue-free and action-driven, plus the Tsjuder speak in an untranslated language, so luckily there is still plenty to enjoy without distraction.

The set-pieces are the main selling points, with Gaup delivering some tense, exciting and pretty brutal action. Right from the start when a dog is killed with a crossbow, followed by its young girl owner, you know the film isn’t going to shy away from the harsh realities of living in that environment at that time. There’s a decent bear attack too. It’s not quite The Revenant, but for the time it’s pretty damn good and contains what looks like a good amount of real life bear interaction rather than FX work. The location and period allow for some nice looking set-pieces too. It looks like a lot was shot out in the snowy mountains, so the scenery looks great and I do love a good snow-bound action movie.

Away from the action, the film can be a bit cheesy though, with some textbook characters, including an annoying chubby goofball villager who is introduced to the film in a scene where he skies into a tree. A love story feels a bit tacked on and unnecessary too, although the film doesn’t dwell on it too much. The mystical stuff is a bit naff, but this could be down to the dubbing as mentioned before.

Overall it’s a taut action thriller with a fairly unique setting though. Economic and exciting, it’s definitely worthy of re-release, if only to get a version that’s not dubbed.

One of the joys of digging out these old VHS tapes is watching the retro trailers, which often include further forgotten titles. Here’s what was on my Pathfinder tape:

Mac and Me – This is an infamously terrible E.T. rip-off, endorsed by MacDonalds (the trailer I’ve embedded even has an intro by Ronald himself – my VHS trailer didn’t). You need to see it to believe it.

Moonwalker – Michael Jackson’s sci-fi oddity looks kind of fun in this trailer. I haven’t seen it since I was little, so I can’t remember much about it. After watching this, I feel it’s time to track it down.

BAT*21 – I’ve heard of this Gene Hackman and Danny Glover starring thriller, but never seen it. The trailer makes it look great, if a little over-earnest towards the end.