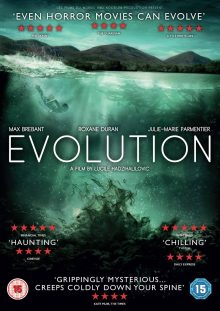 Nothing to do with the 2001 sci-fi comedy of the same name, Evolution is an art-house horror film of sorts from Lucile Hadzihalilovic, the director of Innocence. I usually like art-house genre crossovers, so I thought I’d give this a shot.

Giving a synopsis is tricky as this is a highly unusual film. It opens with a young boy, Nicolas (Max Brebant), swimming in the ocean where he sees the dead body of a boy under the water. No one believes him, but we soon begin to realise that all is not what it seems in this seaside community and something suspicious is going on between the inhabitants. Speaking of which, for reasons never explained, the only residents of this village seem to be young boys on the brink of puberty and their ‘mothers’, who mainly seem a little too young to be so. The boys just play on the beach all day whilst the women tend to their needs, giving them ‘medicine’ at regular intervals and preparing their suspect looking meals. The plot thickens further when Nicolas and some of the other boys are taken to a hospital where they are treated for an unnamed ‘illness’.

I won’t go in to too much more detail about the plot as that would be spoiling things and, to be honest, I wasn’t quite sure what the hell was going on half the time. It’s a most unusual film. On one side this plays to the its strengths, presenting an incredibly mysterious story which you can’t second guess. On the other side, it makes the film quite difficult to maintain a grip on. This isn’t helped by the minimal dialogue and cold, expressionless performances. The presentation is art-house with a capital A in that sense. 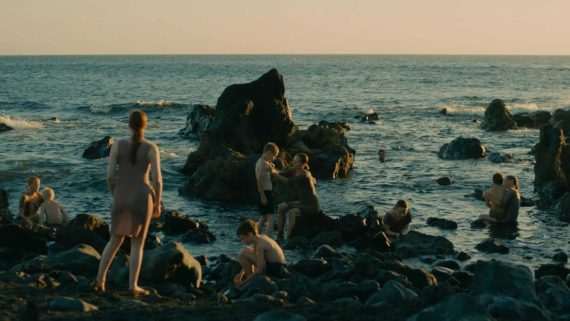 Speaking of presentation, the film looks stunning though. The underwater sequences are incredibly beautiful; full of colour, light refraction and undulating coral/reeds. The scenes elsewhere are largely dark and grimy, but strikingly composed and lit, with gorgeous low key cinematography.

The visuals, when paired with the cryptic narrative and some surreal imagery, help create an incredibly atmospheric film. This is where the film excels. The style and atmosphere are carefully controlled to make the viewer uncomfortable and uneasy throughout. It may not have any jump scares or obvious boogeymen, but the film is creepily scary through most of the running time.

However, I couldn’t quite get my head around what Hadzihalilovic and the writers were trying to say. A lot of the imagery and unusual activity surrounds puberty, sex and pregnancy, so the intended themes are clear, but it didn’t really get my head whirring at any point. Because of this, the slow pace and cold, dark atmosphere, I found the film a bit of a chore at times and got rather fidgety.

So I won’t say I can fully recommend Evolution. It is genuinely unsettling at times and as an exercise in style and atmosphere it’s very successful, but I couldn’t engage with anything beneath the surface, so ultimately found the film a bit dull. Others with a higher threshold for surreal arty fare will likely enjoy the film a lot more than me though. It’s certainly unique and there’s enough fine craft on display to make it worth a watch, so I’d suggest giving it a try, just don’t expect an easy ride.

Evolution is out on 20th June on DVD in the UK, released by Metrodome. The picture and sound quality is decent although it’s a shame they haven’t released a Blu-Ray version as the film looks so good. There are no extras included either, other than some trailers.