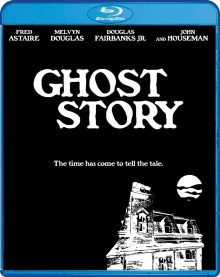 Okay time to start this off with a slight confession. I was not looking forward to this movie at all. Anyone who knows me knows that I am not the biggest fan of horror movies. For me the two main factors for taking this review on was firstly the fact that it stars the amazing Fred Astaire, and secondly because my wife insisted that I give it a go as I would really enjoy it.. The biggest disappointment for me was the fact that she was right.

What do you get when you put Fred Astaire, Melvyn Douglas, Douglas Fairbanks JR and John Houseman together as four friends who tell each other ghost stories by the firelight? The answer is a chilling story of past sins returning not only to the old men but to their family too. The Chowder Club as they call themselves have a horrid secret that will push them to the limits of their friendship and even their sanity as it starts to pick them off one by one in the form of a ghostly woman and two escaped residents from an insane asylum. With the help of the youngest son of one of the members they will tell one story that they never thought they would repeat and face the skeleton’s in their closet.

The casting in this film was superb and it shows the talents of the actors in it at the top of their game. Unfortunately this was the last movie for Fred Astaire, Melvyn Douglas and Douglas Fairbanks JR who all passed away four months before its release so they never got to see the masterpiece of storytelling. It is based on the horror classic book of the same name by Peter Straub which was released two years prior. It is suspenseful and and there are even points of it which successfully managed to make me jump.

This movie has managed many things that I did not think possible and opened my eyes to what horror movies actually have to offer when it is done right.

The blu ray release which is due for release on 7th December includes various bonus features including an audio commentary by director John Irvin as well as interviews with various members of the cast and crew, trailer and production photos.

In my eyes this film is wonderful and a perfect homage to the cast who are no longer with us. It is well worth getting and as always I hope that you enjoy as much as I did.