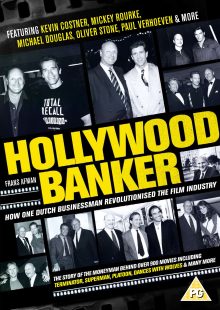 Frans Afman was a respectable banker from the Netherlands who he saw an opportunity to fulfil a dream of working in films; by financing them. Not a well-known figure outside of the industry he was responsible for funding over 900 films; many of them Oscar winners such as Dances with Wolves and Platoon and popular blockbusters like Superman, Terminator and Total Recall.

Starting with Three Days of the Condor in 1975 he became the principal figure who helped independent producers get funding for films in the 80s and 90s. At the time the big studios were not willing to take many risks on unknown producers and unusual stories but using the pre-sale model Afman was able to back hit after hit (as well as an equal number of duds), and he (nearly) always made the money back.

Rosemyn Afman, Frans’s daughter, made this her debut feature film; initially resisting going into the film business she started in fashion but his story was too much of a pull to resist. This is a fascinating insight into film history and the industry as a whole. It’s a nostalgic look using archive footage as well as interviews with his collaborators often with Frans there chatting as well. His wife Anja is the only family member being directly interviewed and also the only slightly critical voice in the film; talking about how Frans would spend 9 months out of 12 away in Hollywood or on location leaving her to bring up their 4 children by herself during those times. But inevitably this is not a critical piece Rozemyn’s relationship with her father was strong and she has nothing to complain about here. Indeed she admitted in the Q&A following the film that this film is ‘a love letter from a daughter to a father’ and it should be viewed as such.

Frans’s motivations for moving into the film business are touched upon and it becomes clear that he loved the lifestyle but also believed in giving voices to those who might not get a chance; his wife suggesting that growing up during the second world war shaped this idea of freedom of thought. He became almost a father figure to producers and stars alike taking a punt on Kevin Costner when no one else would and being instrumental in building whole companies such as Cannon and Carolco who ended up beating the bigger studios at the box office.

A lot of the men interviewed are now dead themselves and the rest are elder statesmen like Oliver Stone and Paul Verhoeven (who offers a gift of a surprising moment when he is interviewed).

If you love film and are interested in the business this is a great addition to its canon.