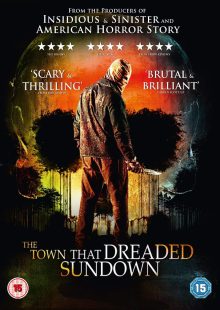 This remake/reboot of Charles S. Pierce’s original moody cult shocker gets a slick modern meta overhaul and while this Town is well made, gorier and faster paced it unfortunately pales to the original due to it being, well, just a bit too meta for its own good. Rather than a straight remake, this 2014 version sees the inhabitants of present day Texarkana (the original film’s setting and where The Phantom Killer struck) having an annual drive-in showing of the 1976 film (a real life tradition in Texarkana apparently) and a couple of young love birds, who are attending said showing, scoot off for a little bit of romance in their car. No sooner has the making out begun than the hooded Phantom Killer has shown up and attacks the couple, much like in the original film. It seems there is a copycat murderer on the loose, using the original The Town That Dreaded Sundown as a template to wreck havoc on Texarkana. The girl (Timlin) from the initial attack escapes, wisely warns the authorities and then teams up with a local researcher (Trope) to find out who the Phantom Killer was and now is, once and for all.

The 1976 version (also recently released on disc) of The Town That Dreaded Sundown is an effective low key chiller that despite its dips into absurd (and pointless) comedy shenanigans still terrifies due to the raw energy of the kill scenes. This remake jettisons much of the comedy (save for a bit of dark humour here and there) but unfortunately can’t quite replicate the sheer terror of the Phantom Killer that the original captured so well. This is due in part to the kills, while competently staged and often gory, seem to be rushed through (short and sharp they may be but everything happens and is over far too quickly) and with the cast of characters constantly referring to, watching and even ridiculing the original film means tension all but evaporates. If the original got one thing right it was the muggy tension that built around when the Phantom Killer may strike. That tension is sorely lacking here and while proceedings are well made and kudos to the makers trying to do something a bit different (with the whole de rigour meta thing), one does begin to wish they has just made a straightforward and full throttle slasher flick. 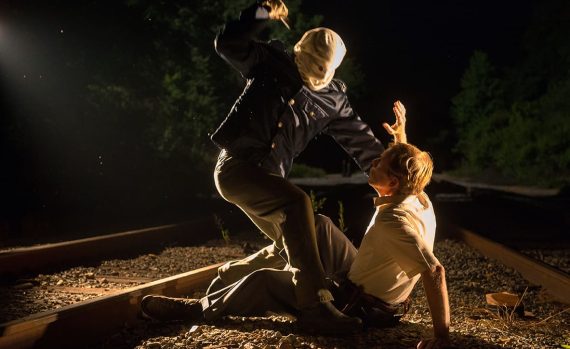 Having warbled on about the meta approach and while one can compare and contrast to the original all day long, the 2014 The Town That Dread Sundown is still a decent horror flick on its own terms. Nicely shot and acted, and with a distinctive propulsive score, the flick is an entertaining slice of horror hokum. While set in present day the makers dress everything up in a sort of timeless setting (another seemingly de rigour staple these days: looking at you It Follows) as everything looks a bit 70s retro despite people using cell phones and driving modern cars.  The Phantom Killer still makes for a great movie bogeyman (bag on head, heavy breathing, brutal with a knife) and while both versions of The Town That Dreaded Sundown are entertaining horrors perhaps one more go at the terror in Texarkana might be worth it to give this cinema slayer the clear-cut hardcore horror, sans comedy and meta, he deserves.

The Town That Dreaded Sundown is released on DVD August 17th 2015 from Metrodome.