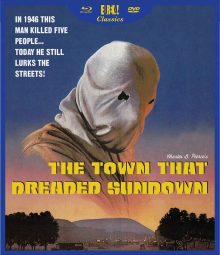 Charles B. Pierce’s 70s (now) cult classic gets a glorious, and long overdue, disc release and while The Town That Dreaded Sundown is often a roller-coaster ride in the tone department there is no doubting the taught tension and shocking violence of its kill scenes. Loosely based on killings that took place in the town of Texarkana, which straddles the Texas-Arkansas border, in the mid 1940s the film attempts to document the slaying spree the murderer (known as The Phantom Killer) went on during one hot spring/summer. Switching between a documentary style approach (complete with narration) and a more linear/dramatic narrative, The Town That Dreaded Sundown (for all its faults) vividly and alarmingly recreates the killer’s murders to often startlingly effect.

Along with the original Black Christmas, The Town That Dreaded Sundown could be seen as one of the prototype slashers that paved the path for genre landmarks such as Halloween and Friday the 13th. Certainly the Friday franchise with The Phantom Killer’s hooded visage no doubt influencing Jason Voorhees’s similar cloth bag head look in Friday 13th Part 2.  Filmed in sumptuous widescreen in the sweltering town of Texarkana, the film, when focusing on the killer, achieves a sort of suffocating gothic dread that has the town in its grip. The first 20 minutes are incredibly tense from the shocking first killing, to the local deputy (Prine) desperately trying to figure out what is going on but unfortunately director Charles B. Pierce squanders this in favour of some abrupt, and startling, shifts in tone. When Ben Johnson’s (The Wild Bunch) bas ass Texas Ranger shows up the tension unfortunately dips, bizarrely switching to comedy cop hi-jinks (complete with a going-for-laughs-car-chase and a spot of random cop cross dressing!!) meaning the sense of dread that was expertly building is all but obliterated. Sure, it gives the viewer a bit of a breather from the atrocities perpetrated by The Phantom Killer but unfortunately threatens to derail the film from becoming the great horror it was starting to be.

The switching between docu-like storytelling and the more traditional dramatic narrative actually works quite well meaning it’s really only the shift to comedy which unfortunately mars proceedings. The pacing is a bit slow in places and the flick seems to walk a very fine line between realistic horror and exploitation trash. Fortunately, the director gets things back on track and stages some relentless kill/horror scenes that while not particularly gory (by today’s standards!) are shocking due to their sustained staging and the brute force determination of the killer: a horror vision rendered scary by his harsh heavy breathing, horrible hooded mug and the effective use of crash zooms into his wide demented eyes). The opening kill hits one like as sledgehammer (and it is advisable to keep the volume turned down at the beginning as the shrill screams of the first victim are unrelenting and ear shattering) and whenever the film focuses on the killer and his hideous acts (including a one-a-kind death by trombone scene: which is a lot more horrible that it sounds!), The Town That Dreaded Sundown still stands as a disturbing horror oddity now worth discovering.

The Town That Dreaded Sundown is out on DVD and Blu Ray August 24th 2015 from Eureka Entertainment. Extras include original trailer, trailer for the recent remake/reboot of the same name and an isolated music score.