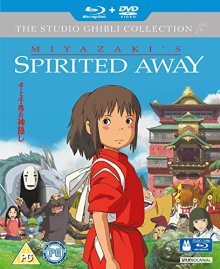 I remember being incredibly excited when Spirited Away was released in the UK. I’d discovered the wonders of Hayao Miyazaki’s work a year or two before it was released. I was getting into anime at the time and picked up a copy of Princess Mononoke on DVD and instantly fell in love. I needed to see more, but only that and The Castle of Cagliostro were available. So I’m ashamed to say I bought most of the director’s early work on pirated Chinese DVD’s (don’t judge me – I didn’t have a choice). I loved every title, as well as the other couple of Studio Ghibli films packaged with them (they came as 2 on 1 sets) and Miyazaki became my favourite director. There are plenty of directors I love, but Miyazaki is one of the few, if not the only one that has a perfect scoresheet for me. So, with Spirited Away getting enough mainstream critical praise and awards to grant it a nationwide release, I was incredibly happy to hear I’d be able to watch Miyazaki’s latest on the big screen instead of a ropily subtitled DVD imported from Asia.

When I did go and see it I thought it was great of course. However, after all the hype I’d created for myself, not to mention the insanely positive reviews it was getting, I never ranked it quite as highly as Miyazaki’s three ‘epic adventure’ titles, Princess Mononoke, Laputa: Castle in the Sky and my all time favourite, Nausicaa of the Valley of the Wind. Maybe it was because I was still relatively young (21) and yearned for more action and a grander scale or maybe it was just the fact that his previous films, which in my mind were equally as good if not occasionally better, weren’t gaining the attention that Spirited Away was getting. For whatever reason, even though I thought the film was brilliant, I couldn’t shake the feeling that it was a little overrated.

And a couple of weeks ago, 11 years on (the film was released in 2003 in the UK), I was offered the chance to review the blu-ray release of the film. God knows why it’s taken so long to bring Spirited Away to high definition in this country, but I was delighted to be one of the first people to get my hands on the disc. It also gave me the chance to re-evaluate the film after not having seen it for around 7 or 8 years. 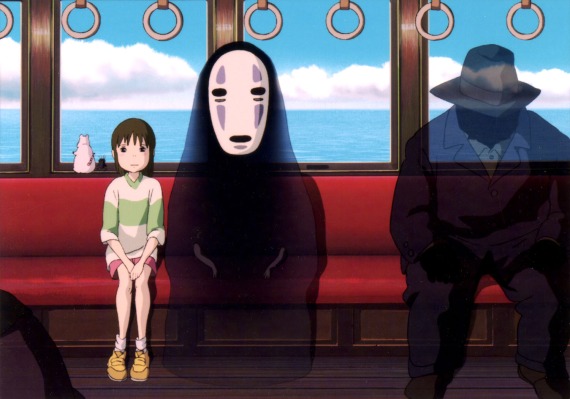 Spirited Away tells the story of a 10 year old girl, Chihiro, who at the start of the film is on her way to a new house, far away from where she used to live. She’s not happy about this at all and whines to her mum and dad as they drive through the countryside. Getting lost along the way, they come upon a seemingly abandoned village and decide to take a look. Finding a shop full of delicious looking food, but no staff to serve them, Chihiro’s parents tuck in. Chihiro wanders around a little, growing increasingly frightened as the village slowly comes alive with strange and unusual creatures. When she returns to her parents she finds them transformed into pigs. Running for safety and shelter, she comes across Haku, a kind boy who helps her find a place to stay in a huge bath house run by the wicked sorceress Yubaba. To live there Chihiro must sacrifice her name (changing it to Sen) and earn her keep though. Through working hard and dealing with the weird and wonderful clients and staff members, Chihiro gradually develops from a lazy, weak and timid child into a selfless, strong and fearless young woman. Of course, her ultimate goal though is to save her parents and go back home.

Well, through my own maturity I imagine and the years passing since my last viewing of Spirited Away, I can now safely rank it amongst the very best of Miyazaki’s oeuvre as well as class it as one of the finest animated films of all time.

Spirited Away may not have great battles or action set pieces and most of it may be set in or around a single (if quite large) location, but it remains a captivating and exciting adventure which thrives on building its character arc equally as much as developing its wonderfully rich fantasy world. It takes activities and settings which don’t sound very thrilling on paper (treating Gods to a bath) and makes them spellbinding and full of drama. It knows when to slow things down too, most notably in the train ride sequence, where the audience and Sen/Chihiro are given time to reflect. It also mirrors the opening car journey sequence, showing how the young girl has developed from petulant cry-baby to patient heroine. It’s moments like this which elevate the film to work as a thoughtful drama that adults can appreciate as much as it is an enjoyable romp for children through a land of magic and monsters.

And what a land. The hand painted artwork is stunningly beautiful and the imagination and design of the world and those that inhabit it is truly breathtaking. I believe a lot of the ideas come from Japanese folklore, but everything is so well realised and integrated, it stands head and shoulders above pretty much every fantasy film I’ve ever seen. Anime (Japanese animation) is often full of wild and wonderful ideas, but, more often than not, these ideas struggle to come together to form a cohesive and digestible whole. Here, as unusual as some of the creatures and concepts are, everything seems to make sense within the world and helps drive the central arc and core messages of holding on to one’s identity, learning to work hard and act selflessly whilst avoiding greed.

Spirited Away’s messages are clear and bold, but avoid the ‘in-your-face’ presentation often provided in Western children’s films. There are no blunt speeches from characters telling viewers how they should act. Instead we learn with Chihiro and appreciate the result with her in the sweet and unlaboured finale. Like most of Miyazaki’s films, it also refuses to offer clear villains. Yubaba is quite frightening at times and makes a number of threats towards Chihiro and Haku, but she still shows warmth alongside the hostility and acts fairly when she must. This gives the film a humanity and believability despite being made up of an array of gods and monsters.

Simply put, the film is a masterpiece. The 10 year old in me may still slightly prefer Nausicaa of the Valley of the Wind, but I can no longer deny the pure brilliance of Spirited Away. It works on so many levels without ever feeling pretentious or dull and its wonderfully conceived vision of a fantasy world, crafted in the finest possible way (I haven’t even mentioned the beautiful score or animation), make it a pure joy to behold.

Spirited Away will be released on dual format Blu-Ray and DVD in the UK on 24th November, released by Studio Canal. I watched the Blu-Ray version and the picture quality is magnificent. There’s a rich dynamic range, bringing out the colours and beauty of the artwork. The extra detail allowed in high definition means you can truly appreciate the soft hand drawn and painted nature of it too and can even make out the texture of the paper at times. The audio comes through beautifully too. You get a choice of 5.1 tracks in both the original Japanese and the re-dubbed English language versions. I only watched the Japanese version (I can’t stand the re-dubs, they just sound wrong to me and the American accents grate), but I imagine the US track is well mastered too.

You get what looks like a lot of extra features on paper, but a lot of them are pretty throwaway unfortunately and I think everything here was also included on the original 2 disc DVD edition. An introduction by John Lasseter and ‘Meet Hayao Miyazaki’ are cringeworthy mini interviews, the latter of which focuses more on Miyazaki’s thoughts on Lasseter than delving into the life and work of the director himself. There’s ‘Behind the Microphone’ which looks at the process of re-dubbing the film into English, which is short and not particularly enlightening. You get some trailers too of course and then you have two more substantial special features. One is the option to watch the entire film with a side-by-side storyboard comparison. This is an impressive addition although I don’t know how many people will want to sit through the whole film like that.

Finally there is a 47 minute Japanese TV special on the making of the film. This is unusual, opening with a 5 minute abridged version of the first half an hour of the film. Then a cheesy over the top introduction with naff graphics leads us into actually quite an interesting look behind the scenes of the production and post production process. A rather annoying voiceover threatens to spoil matters, but there are enough gems in the footage (such as Miyazaki cooking noodles for the crew) to make it well worth watching.