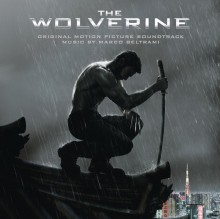 I couldn’t resist volunteering to review this soundtrack especially after having seen the film – which was both darkly sumptuous and delectable, as far as superhero flicks can be described as such. This sound track, by the Oscar nominated Marco Beltrami, doesn’t disappoint in providing the usual mix of film score snippets and full length tracks with various themes, moods and narrative .

The most notable tracks include: Logan’s Run – a high octane, action packed track which features Taiko inspired feats of high tempo drama and conflict from wooden sticks, drums and horns, and which evoke visions of a small army of ninjas tapping out a furious martial tattoo as they strike. Awesome. Funeral Fight is another action infused piece for a key battle scene in the film – i.e. during a funeral in which Logan battles to save the daughter of his nemesis, friend, benefactor and ultimate villain of the story. The Hidden Fortress underpins the key scenes at the final act and resolution of this saga. Again, it is militaristic and tense, but occasionally interlaced with some uplifting string arrangements that hold a sense of yearning and foreboding loss.

Although several of the pieces are martial in nature, albeit with elegant touches of Japanese cultural drumming phraseology, it is all very much aligned with the story, nature and location of the film, which is mostly set in modern Japan (with dashes of wartime and feudal Japan thrown in). Some of the other tracks, notably, Arriving at the Temple and Where to? present a more sublime musical experience, with sweet melodic rhythms and pacing that are pure pleasure to listen.

Overall, I’m inclined to consider this a fine example of what a soundtrack should be – i.e. something that is purpose built to enhance the film it underscores – but which many fail to achieve, in my opinion. The hands of a master craftsman in Mario Beltrami is evident throughout, with the unerring choices in themes, tempo, and musical execution. It gave The Wolverine movie an excellent and unintrusive soundscape in which to tell its story to this adoring fan.