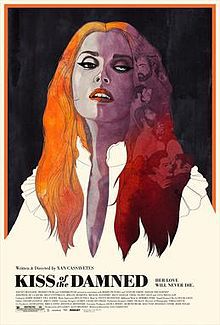 It’s not Twilight or Buffy, but neither is it a product of the OTT gore and terror school of modern horror like the many exorcism themed shockers or found-footage movies that over saturate the marketplace. This film clearly takes its influence from the horrors of the 60’s, 70’s and even the 80’s, with a nod to 90’s vampire flick, Interview with the Vampire, too, as well as more than a whiff of that instant cult movie coolness possessed by such movies as An American Werewolf in London. From the opening text and a quick splatter of blood, we could be forgiven for thinking we’re about to watch a Hammer horror movie. A scene featuring main character Djuna, typing on her Apple logo laptop lets us know we’re firmly in the present day.

This is a movie about relationships, family, tensions and passions – explored through a dark romantic storyline with touches of the erotic. As soon as Djuna (Josephine de la Baume) meets Paulo (Vilo Ventimiglia), they are irresistibly attracted to each other. After a few encounters their relationship progresses to her bed and then, through the customary bite, into the vampire world. The difference here from the usual vampire attack is that Djuna cares for Paulo and tells him she is a vampire in advance, proving it by transforming (while tied to a bed in her underwear). Paulo obviously finds this a little too much to resist, and thus begins his journey into the world of the vampire.

The movie is spiced up when Djuna’s sister Mimi (Roxane Mequida)turns up; a sassy and dangerous sex-siren type character who doesn’t play by the rules (did I mention that the ‘sophisticated’ vampires have moved on to synthetic blood, or animal blood instead of the forbidden practice of hunting humans?). Mimi has an insatiable appetite for sex, gore and blood, her behaviour at once threatening to endanger the whole of the vampire society, who, like all addicts, constantly struggle with their own temptations.

Djuna and Paulo stay in a house owned by Xenia, a darling of the stage and effectively a head vampire (although never named as such). When she’s not accepting rapturous applause she’s hosting lavish parties and debates at which the vampires mull over topics and issues; chief of these the struggle to live in the shadows of a human dominated world. A little like Interview with the vampire, their nocturnal world consists of parties and occasions when not relaxing at home or out hunting animals. Once transformed, Paulo dresses much more classically – adopting smart suits and attire and abandoning the beanie and t-shirt image. He even improves as a person – evidenced in a scene where, as a script writer, his agent congratulates him on the recently very much improved quality of his writing.

I won’t mention anything else about the story here to save spoiling it for those who are tempted to watch. The film itself looks great, with plenty of shots of the moon, sunsets over the shimmering lake, the lavish interior of the huge house in which Djuna and Paulo reside, and big panoramic shots interspersed with fast paced hand held footage of the vampires on the hunt; all gnashing teeth, piercing eyes and snarling. We don’t see a single animal killed, bit imagining it is enough.

Of the human killings we see a few, and I’m pleased to say that many of them are straight from the Tom Savini school of proper effects and make-up, rather than the modern reliance on CGI effects which can usually be spotted a mile off when overused. Vampire transformations are good because they are subtle – contact lenses, fangs and blood-drenched mouths providing all the horror needed. There’s a great part where Mimi kills a guy she’s just been having sex with in an alley. We see her gazing soullessly down at him as he dies. Then she just saunters away, the flesh dangling out of her mouth like something from Savini’s workshop.

There’s some Kubrick here and there in the flicking from a calm shot to a dramatic blood soaked shot, back to the calm one, back to the blood soaked one a la The Shining. There are also some great jarring uses of the musical score-abruptly stopping the soundtrack when the visuals change. The soundtrack itself is a mixed bag of classical pieces, atmospheric noises, dark hard rock guitar chords and some dark space-synth. Sometimes the music is reminiscent of an old Japanese martial arts flick; as there are a few instances when the music develops an oriental feel, including plucked acoustic instruments with narration over the top.

Camera work is great with an interesting use of angles and lighting to create the required dark atmosphere. This movie is refreshing. At 97 minutes you really don’t lose interest. The total absence of fast-paced shocks and modern ‘terror’ is welcome, and I could jump for joy at the inclusion of characters that you actually care about rather than the token good looking American teen – ‘OMG!, like, Vampires?, euuuuuuhh!’. What a very different movie that might have been! 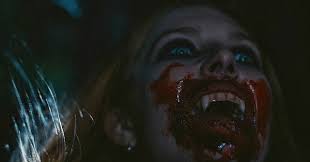 What’s also great about this film is that it lets us use our imagination rather than spelling everything out with extreme blood and guts carnage. When we then do see a bit of gore it’s more effective. Even in non horror scenes, like Xenia’s performance at the theatre, a close up of her face wearing a wig and receiving rapturous applause as if onstage gives us all we need. We don’t physically have to see her performance to know that she must be incredible. This approach not only saves on budget, I’m sure, but saves the film, as the director knows exactly how much to give us and what to do to stop this film being to laborious, cheesy or corny.
Overall this is well worth a look. It’s not quite what you expect it to be and really does stand out from the other movies that have attempted to tread a similar path.

Extras include interviews and commentary with Writer/Director, Xan Cassavetes, individual interviews with the cast and trailers.