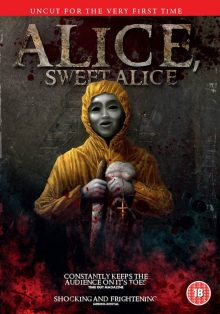 The 70’s saw horror films really hit their stride. There were great titles made in the genre since the beginning of cinematic history, but the 70’s were when the barriers were broken in terms of truly shocking an audience and when horror really became popular. Films like The Exorcist and Texas Chainsaw Massacre sent weaker audience members fleeing in terror and those boasting a stronger disposition came in droves. This new generation of films shocked not only through higher volumes of realistic gore, but through more disturbing themes and content which didn’t always hide in the shadows.

Alice, Sweet Alice (a.k.a. Communion or Holy Terror) came in the middle of the decade to reasonable acclaim but never quite gained the ongoing momentum of some of its peers. Director Alfred Sole went on to helm only two more films before becoming a production designer for the rest of his career, which is a shame because on the strength of Alice, Sweet Alice he had a lot of talent.

As mentioned, the 70’s breed of horror films were often quite disturbing and Alice, Sweet Alice is no different, largely due to its focus on murderous acts carried out on and by children. The title character Alice (Paula Sheppard) is an unpleasant 12 year old girl that constantly taunts and threatens her younger sister Karen (a young Brooke Shields in her debut film role), an overly perfect little ‘darling’ to their separated parents. During her first communion, Karen is brutally murdered and all eyes turn towards Alice as the culprit, especially those of the audience who are the only witnesses to the crime. The girl’s parents (Linda Miller & Niles McMaster) refuse to believe that their precious daughter could do such a thing though and whilst the seemingly deluded mother hides away from the truth, the father decides to do some investigating of his own.

As The Exorcist and countless Japanese horror movies have proven over the years, young girls can make very creepy and disturbing villains and this adds to the pile. Sheppard does an excellent job of creating a believably nasty child on the brink of becoming a teenager with an added dark edge which helps you accept what she could be capable of. And she’s not the only unpleasant character on display. We’ve got the grotesquely overweight landlord Alphonso (Alphonso DeNoble) who shows hints of being a child molester and Aunt Annie (Jane Lowry), who is openly cruel to most of those around her, especially Alice. Even the girls’ mother isn’t perfect. This makes for quite a disturbing experience and in other films such a cast of unlikeable characters has been their downfall, but Sole keeps them interesting and always watchable. Some acting histrionics flare up and threaten to spoil things, but generally things are handled well. 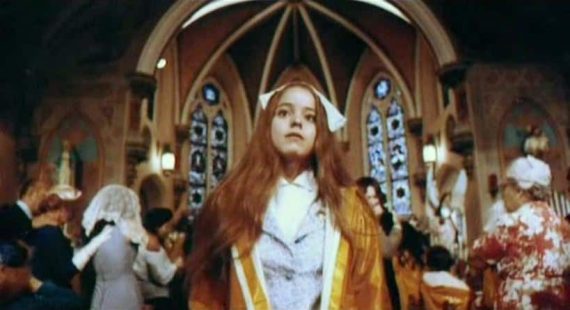 The film is very stylish too, with some well composed imagery and slick use of movement and space. From the offset I got a distinct giallo vibe, although in the commentary included in this set Sole professed to not having seen any giallo films prior to making Alice, Sweet Alice. Instead he sites Hitchcock as his chief influence and this can be seen too as well as heard in the ‘Herrmann-esque’ score.

I was loving this film through the first two thirds, but unfortunately it hit a bit of a stumbling block after that point. Without wanting to spoil the film too much (skip a paragraph if you don’t want to risk it), there’s a big twist about an hour into the film which totally turns the film on its head. When this happened I was quite disappointed and thought they’d spoiled one of the aspects which most intrigued me about the film and I felt the momentum was lost a bit. Luckily things are tied up very effectively and although I didn’t like the choice of u-turn the film made, the final act is still well handled so I can’t complain too much.

A second viewing will likely knock my rating up half a star or so, but after the first I couldn’t help but feel that Alice, Sweet Alice was a great film that shot itself in the foot with a disappointing twist, even if it didn’t totally disable itself in the process. Lovers of 70’s films, horror titles in particular, should definitely check this lesser known gem out though as it has an awful lot going for it and deserves more attention than it has received.

Alice Sweet Alice is out now in the UK on DVD, released by 88 Films. The film has been nicely restored with a clean (if not particularly sharp) picture and decent audio.

There are a few throwaway features including a trailer, alternative title sequence (just the same with a different title) and stills gallery, but luckily these are eclipsed by a feature commentary with director Sole, editor Edward Salier and William Lustig (who only worked on a couple of inserts, but is probably here for his own cult director status). This is great; loose and friendly, with the three of them full of praise for the film and anecdotes and interesting facts about its production (Sheppard was actually 19 when they shot the film!). It’s great that companies like 88 Films keep these movies alive and even better that they still manage to include special features when behind the scenes footage or cast/crew interviews can be hard to come by.

* Please note, the film still in this post is not from the 88 Films DVD.