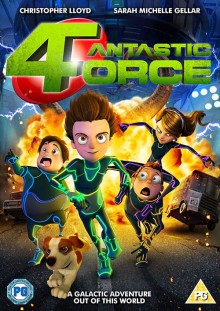 Despite having two biggish names in it and a promising premise, there isn’t that much going for Fantastic 4orce.

Fantastic 4orce, or Freedom Force according to IMDb, (fource – there are four them and they are a force, apparently) is the story of four children who have the usual cliche of abilities. There’s a clever one, a martial arts expert and the one who farts a lot; you know all the usual cliched abilities.

This crack team is assembled because an evil man has decided that, in order to ruin some planned celebrations for Jules Verne, he will go into the stories themselves and remove characters so that they no longer make sense.

The team then has to go into these stories and return them to normal again. It’s an interesting idea, it’s just not been done very well.

My biggest issue, after the farting child, is the animation. It looks terrible and that’s not just me the adult saying that. I watched this film with my children and even they didn’t think much of it. Raised on a diet of Pixar and Dreamworks animation, not to mention Tom and Jerry and Daffy Duck, they soon pointed out how poor Fantastic 4orce looks.

All the textures are flat and lifeless. At one point, whilst the team is trying to return the story Five Weeks in a Balloon back to normal, they are being chased by a pack of identical lions across what looks like a one, single, flat brown collection of pixels. It looks like a cheap mid-1990s video game.

The faces of the characters and the scenes they are in are no better either. The mouth movements don’t seem to bear any relation to what is being said. Yes the film has Christopher ‘Back to the Future’ Lloyd and Sarah Michelle ‘Buffy’ Gellar in it, but take them away and the it wouldn’t affect the film. In fact it would have been better if they had used the money they spent on these two to improve the animation.

In fact the mad scientist played by Lloyd seems to spend most of the film torturing his assistant so that he can use him as some sort of projector. Not the sort of thing you would expect to see in a children’s film. One to avoid.

Fantastic 4orce is out now in the UK on DVD, released by Signature Entertainment.