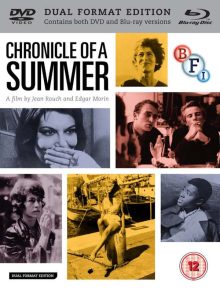 At the start of the 1960’s, whilst the French New Wave was in full swing, revolutionising the way films were made, another cinematic practise or idea was developed by Jean Rouch, known as ‘cinéma vérité’. Almost equally as influential as the styles employed by Goddard, Truffaut and the likes (in fact it influenced them too), cinéma vérité was a new way of producing documentaries. It combined improvisation and other constructed elements with traditional ‘fly on the wall’ methods to try and bring out ‘truth’ and ‘reality’ whilst making the audience aware of the presence of the camera and influence of the director.

Spearheading this movement, which was inspired by the work of Dziga Vertov (Man With a Movie Camera) and Robert Flaherty (Nanook of the North), was Rouch and sociologist Edgar Morin’s film Chronicle of a Summer (a.k.a. Chronique d’un été). They set out to chronicle the lives of the people of Paris over one summer in 1960. As they explain at the start of the film, they wished to see if people can truly be honest, truthful and natural while speaking in front of a camera. They begin by grabbing short interviews with people on the streets, asking the seemingly simple question of “are you happy?” As the film moves on it sets its focus on a handful of people and interviews them in depth about happiness, politics and other influences on their lives. These participants are also grouped together and discuss topics as a group on several occasions. On top of this we are presented with a couple of more clearly set-up improvised ‘performance’ sequences.

A self-defined ‘experiment in film truth’, the film as such remains very interesting to watch and is clearly an important piece of cinematic history, but, being an experiment, it isn’t always hugely engaging. With many of the subjects being students of philosophy and sociology, much of the time is spent with them giving in-depth analyses and philosophising on various subjects and that kind of thing can get a bit much to watch for me (I am a Yorkshireman after all). That said, I certainly didn’t ‘switch off’ during the film and I often found their debates fascinating. I particularly found the ‘finale’ interesting where the subjects were gathered to give their thoughts after watching the film. Their views are interestingly varied, questioning the truth inherent in the different approaches and these are summed up and discussed afterwards when the two directors draw their conclusions. 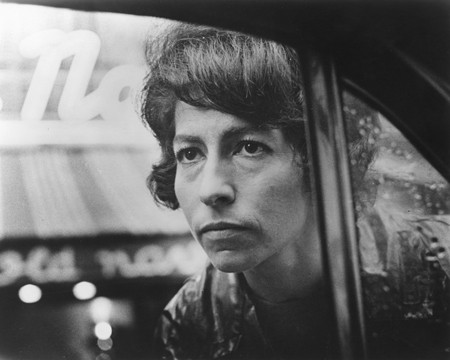 Also, although the intellectualism often got a bit much, there is enough raw emotion and passion on display to give the film an emotional weight at times. One woman is suffering from depression and the directors’ continued questioning of her and the unflinching gaze of the camera make some of her interviews quite moving and difficult to watch. I found group discussions of class and race riveting to watch too as tempers flare and occasionally dated yet (seemingly) honest opinions are aired. The Algerian war was raging at the time too and violence was erupting in the Congo and these issues are discussed in depth, showing how those not physically involved actually felt or cared about the conflicts, which again is quite illuminating.

So Chronicle of a Summer works on numerous levels as a snapshot of a place and time, an experiment in ‘reality’ and ‘truth’ and as an anthropological study into what makes people happy and what doesn’t (largely what doesn’t – the subjects can be a miserable and bitter bunch). It doesn’t always fully engage, with its endless philosophical musings reminding me why I struggle with a lot of high brow French cinema, but ultimately it’s hard to criticise a sociological experiment for being too intellectual. It clearly influenced numerous filmmakers and still does, so you have to admire the film and it often makes for a fascinating experience.

Chronicle of a Summer is out now on dual format Blu-Ray and DVD in the UK, released by the BFI. I watched the Blu-Ray version of the film and the picture quality is great. Given the nature of the film the footage is very raw and occasionally rough around the edges, but this transfer handles it beautifully, not cleaning it up too much so as to ruin the nature of the footage, but removing distracting signs of age and retaining the beautifully rich textures of the original black and white footage. Again, the audio quality reflects the source material – it sounds ropey at times, but only in terms of the rough way it was originally produced.

There are two lengthy supplementary features and both are very welcome additions to the set. Un été + 50 is a 75 minute documentary which mixes a huge amount of deleted scenes with interview footage of those involved. This is relaxed and a bit rambling like the film itself, but is still fascinating and I found some of the deleted scenes stronger than those in the film itself so it’s interesting to see what was left out and why. By showing the clapper board and further input from the directors, you see more clearly the intrusion of the camera and the artifice of much of the film’s construction too and this is discussed in the interviews. It makes for a decent documentary in itself.

Also included is a 55 minute lecture by Jean Rouch at the NFT, recorded in 1978, with the director discussing Vertov and Flaherty’s influence on his work and that of other documentary makers around the world. This is an audio only piece, but is an interesting listen to anyone interested in the early days of documentary filmmaking and how it evolved into what we know now.