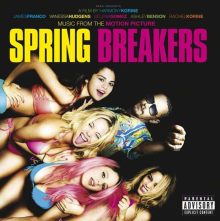 Brit, Candy, Cotty, and Faith have been best friends since grade school. They live together in a boring college dorm and are hungry for adventure. On their spring break they rob a restaurant and get bailed out by a drug dealer. Sounds pretty mixed up, much like the soundtrack.

Ok so this is an interesting and annoying soundtrack all in one. The main theme is a mix between grimey gangsta rap with offensive lyrics and beautiful eerie electronica with a Bladerunner feel composed by Cliff Martinez (acclaimed composer behind the scores of Drive, Contagion, Traffic etc) and six-time Grammy award winning DJ/Producer Skrillex.

The Martinez and Skrillex combos are amazing, beautiful tunes with great mixes, very impressive. This soundtrack would have been all the better for just having their individual and joint tunes on it. Saying that of course the other tracks by various artists fit with the film’s theme and are at home in that context. But man I love the Martinez/Skrillex sounds, grimey, arresting, dreamy and trippy all at once. These tracks alone and the addition of Ellie Goulding’s Lights right at the end of this 19 track album make this seriously worth checking out.