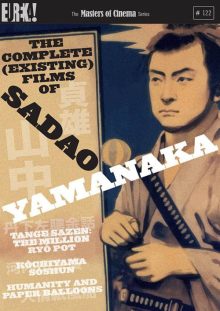 Sadao Yamanaka’s story is a tragic one. In the late ’20s and early ’30s he made quite a name for himself in Japan as a screenwriter and moved swiftly into directing in his early 20’s. Over the next six years he directed an astonishing 22 films and became well known and respected in the country. However, in 1937 he joined the war effort and died of dysentery the following year at the tender age of 28. Despite being revered in his home country, most of his films have since been lost (many during the war no doubt). In the ’30s Japanese cinema wasn’t yet brought to the attention of the West, so elsewhere he was little known. In the last ten years or so his work has become more recognised worldwide though and after releasing Humanity and Paper Balloons back in 2005, Eureka’s Masters of Cinema label has finally brought together this with the only other two remaining films from the director, Tange Sazen: The Million Ryô Pot and Kôchiyama Sôshun. They are all to be released in a 2 DVD set entitled The Complete (Existing) Films of Sadao Yamanaka.

Here are my brief thoughts on all three films in the collection. 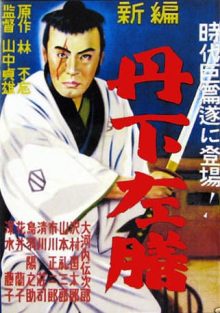 The earliest of the three films is Tange Sazen: The Million Ryô Pot (a.k.a. Sazen Tange and the Pot Worth a Million Ryo). Sazen Tange was a popular character in Japan at the time, first appearing in a series of serial novels. He was a once noble samurai who lost his eye and arm due to some sort of betrayal, turning him into a nihilistic Ronin (a masterless samurai). In this fairly light-hearted film he’s more of an uncouth and lazy character though.

The story surrounds an old, cheap-looking pot, which has been passed from the Yagyu family’s elder son to his young and unpopular brother as a token heirloom. The elder brother discovers that the pot contains a map to a treasure worth 1 million ryo though and tries to get it back. Unfortunately, the younger brother’s wife had sold it to some passing junk dealers. The pot ends in the hands of a young boy, whose father is killed partly due to the half-arsed protection of Sazen Tange. Taking pity on the boy, Tange decides to look after him and of course the two brothers looking for the pot end up at his door.

It’s a well-constructed story which rolls along with a fair dose of humour. For a film which is almost 80 years old, it’s still quite funny. It’s not out and out hilarious, but all of the bickering and back-tracking is fun to see. Much of the humour comes from the fireworks between the lazy male characters and their much more forceful wives and girlfriends. The men all have delusions of grandeur – as demonstrated by the repeated reference to their actions being “like being on a quest for vengeance”. These aspects turn the film into a dig at the typical view of the noble samurai and quiet dignity of the Japanese people. A known leftist, Yamanaka supposedly often put his political statements into these period films to hide them from the strict Japanese censors. It’s clearer in the other two, more cynical films in this set, but this is still quite damning with its characters who want easy money, playing games and drinking rather than working for the goal they wish to achieve.

So there is a bit of a dark edge to this – a good amount of the humour is black too and that’s what helped make the film more than a bit of fluff for me. Add to this some elegant cinematography and an incredibly rich soundtrack, and The Million Ryô Pot is a fun, finely crafted classic comedy with enough under the surface to keep it noteworthy so many years on.

Kôchiyama Sôshun (a.k.a. Priest of Darkness) is another period piece, this time based on a classic kabuki play. The titular character is the leader of a yakuza gang and earns money by gambling while his wife, Oshizu, runs a tavern. When the young Hiro steals an expensive dagger from an important samurai as well as eloping with a courtesan under the control of another influential master, he gets into all manner of trouble. Sôshun decides to help him though, alongside an honourable Ronin who also gets drawn into matters.

This didn’t come together quite as successfully as the other two films for me. The main issue was the plotting. I found the film quite difficult to follow. There are a lot of characters to keep tabs on. Because of this, it made the film feel quite slow and I didn’t get quite as engaged this time around.

Saying that, the film is still impressive and shows why Yamanaka was such a talent. Again it is finely shot, with strong leading lines and careful framing. A scene where snow descends on the town is particularly beautiful. A claustrophobic action finale brought me back to the film too, having the characters backed into a corner through the tight passageways between the slums of the town.

What Kôchiyama Sôshun also demonstrates is Yamanaka’s ability to craft rich and believably human characters. Nobody is perfect and the fairly natural performances and dialogue imbued with humour, warmth and cynicism make for a film which hasn’t dated like many other films of the period.

Again, the film is quite damning of the Japanese people, with all of the male characters (the women in his films get away lightly) swindling their way through life in any way possible. The three ‘heroes’ do find honour by the end though and, as dark as the film is at times, it isn’t as bleak as what was to follow. 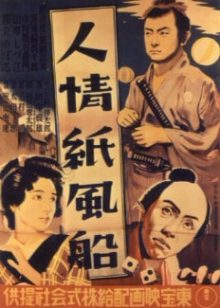 Humanity and Paper Balloons opens with a suicide discovered in the slums of a city, again in a period setting. As the village gossip about it, we are introduced to Unno, a down and out Ronin who is struggling to get by, his wife supplying a meagre income selling paper balloons. His one hope for wealth is a supposed friendship between his now-dead father and a rich samurai master living close by. The master refuses to acknowledge Unno and continues to fob him off though.

Meanwhile, we follow the trials and tribulations of Shinza, a young upstart who is trying to run a gambling circle away from the rich master who runs the illegal activities in town. Of course this gets him into all kinds of trouble, leading him to kidnap the master’s daughter. Unno, defeated at this point, decides to help him out, but the action has a devastating effect on both of them.

After hinting at bleakness before, Yamanaka goes all out here in a quietly devastating film about the fruitlessness of honour and ‘face’ amongst the lower rungs of society. Like the previous film in this collection, Humanity and Paper Balloons juggles quite a few storylines and characters, only this time more successfully in my eyes. 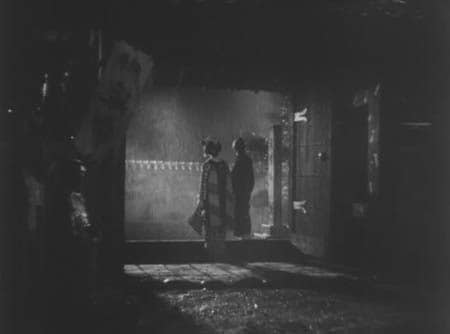 Like before the characters display deep social flaws. This time it’s a lack of respect that is front and foremost. Following the suicide at the start, for instance, we see the villagers taking it quite lightly and the ‘wake’ quickly becomes a drunken party. The only honourable character is Unno, who is dignified in his poverty, however by the end he loses this dignity and in fact it’s Shinza who ends the film with any sort of honour after living as a cocksure rebel for the most part.

Once again these characters are very rounded and human too. Yamanaka had a real knack for breathing life into these potentially stagey and melodramatic plots through a fairly natural approach without sacrificing the beauty of the film. And what beauty. Again this looks gorgeous, framed to perfection and quite moodily lit at times. There are a couple of very powerful sequences shot in the rain, where Unno is shunned for the last time and the daughter is kidnapped. These are heartbreaking and dark on their own but with the dramatic and visually stunning approach they truly stand out.

It’s a superb film which is very dark and bleak by the end, but beautifully made and is a fine final testament to the director who was sadly taken too soon. Given another decade in the industry or many more as he would have been capable of providing, Yamanaka could have easily become the widely respected master that his contemporaries Ozu and Mizoguchi became.

The Complete (Existing) Films of Sadao Yamanaka is out on 20th May on DVD in the UK, released by Eureka as part of their Masters of Cinema series. The picture and sound quality of the earliest two films are quite rough, but Eureka have clearly done their utmost to preserve the quality of these rare and old films and they’re still perfectly watchable, unlike some less respectful re-releases of classic films. Humanity and Paper Balloons, which was released separately on the Masters of Cinema range several years ago, looks and sounds very good for its age though. There’s a bit of flicker and a hint of softness, but the image is overall very clean and clear and the sound is an improvement over the previous films.

For extra features you get the trustworthy Tony Rayns discussing the director in a 23-minute interview and an introduction to two brief surviving fragments of earlier films in Yamanaka’s career. These are taken from trailers so only focus on the action scenes of the films, but it’s still a great find from Eureka. As ever Rayns’ pieces are very informative – what does this man not know about Japanese cinema?

On top of those you get the ever-reliable booklet containing interviews, essays and behind the scenes looks at the films. I didn’t receive a copy, but they’re usually well worth a read.