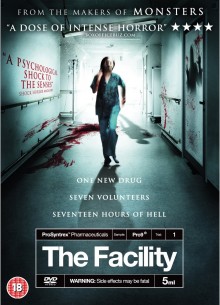 General premise: seven volunteers arrive at a remote medical centre called Limebrook to take part in a clinic trial run by ProSyntrex Pharmaceuticals. These human guinea pigs have agreed to stay for two weeks in isolation, testing an experimental new drug known only as Pro9. After settling into the facility, each participant is given a first injection and following a group dinner, sent to bed. This is where the ‘fun’ begins as they are all awoke by the harrowing screams of one of their group and one by one, each starts to show signs of the side effects.

As a fanboy of horror and a collector of all Cronenberg movies, I have to say this should not be placed upon the same shelf. It’s an OK movie. It builds up tension relatively well but its selling point of ‘Cronenbergian’ is a fake. The audience are offered very little in regards to pay off for a body horror. We have a couple of very brief moments that could have been developed far more and created a more shocking visualisation of a body horror. A couple of glimpses at blood over a face and two shots of face dismophia just don’t cut it. On its own, without the Cronenberg connection, this is an OK movie. It builds up tension well, its use of camera and editing for the large part work very well in adding to the tension. The sound also effective for most of the movie and the use of silence, at times was very haunting. However, the acting at key moments fell short and actually sabotaged the build up, including Adam as the central character being out performed by all. 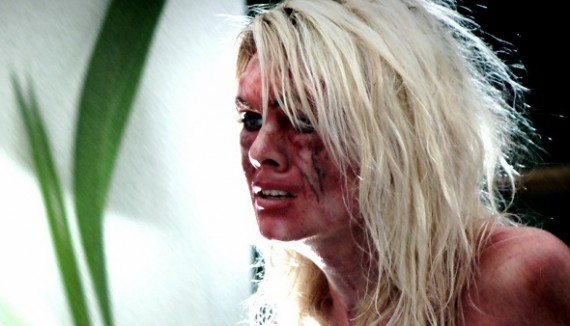 When we are first introduced to the characters, we are shown an almost cliche characterisation. Guitar carrying hippy and polo shirt, collar turned up estate agent. All far too two dimensional. The charisma from Adam was none existent. Bearing in mind this is a film with a micro budget, the constraints of time as well as all others will have a negative impact on the product. Derek, was the only character that absolutely shone out from the group. His acting far more genuine and honest than the others.

Make-up and gore were very well done, though not Cronenbergian.

The script, again I felt suffered from being a micro budget. We’re offered:
‘…That’s what attracts me to hospitals. The weak and the vulnerable…’ Derek the unemployed volunteer states. This line is an awesome line that absolutely tells us a wealth of what this film is about. Fantastic, but this was not exploited enough.

‘…You stay here. I’ll go have a look…’ Anyone else have a problem with lines like these in horror movies? The formula followed with no creative interpretation or deviation.

Within the confines of small budget and all the limitations that hinder a micro budget production this film comes out very well. Its use of location, lighting, camera and sound are effective and we certainly see that the director knows his way around a film set and with a larger budget, more time and greater confidence, then I’m sure we would have experienced the film he intended and for a first feature it is relatively accomplished.

The DVD extras are very poor.

Making of The Facility
Nice insight into the director and how the film came into production. Also some nice behind the scenes with make-up and the actors.

Trailer
I’ve got the film, do I need the trailer as an extra?

Teaser Trailer
I’ve got the film but a teaser is always nice to have.