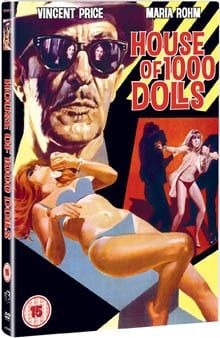 Vacationing in Tangiers, a young couple run into an old friend whose girlfriend (the very sexy Rohm) has disappeared. Their old friend soon disappears himself and when they investigate further it appears that the girl has been kidnapped by an international gang of white slave traders and when her boyfriend nosed around too much, trying to find out what happened to her, he’d been murdered to keep him quiet.

The fairly wooden Stephen (Nader) suspects that Manderville the Magician (Price) and his assistant Rebecca (Hyer) are behind a number of girl’s disappearances, as wherever his show plays across a number of different countries attractive young women seem to go missing.

Is Manderville the Magician the mysterious ‘King of Hearts’? Will any of the scantily clad women manage to escape from the exclusive brothel that is ‘The House of 1,000 Dolls’? Will Stephen and Maria ever find their deceased friend’s missing girlfriend? Will you even care? Will you still be awake?

Sadly Peter Welbeck’s (or should that be producer Harry Alan Tower’s) script suffers from too many inconsistencies and mundanities to make it particularly gripping leaving the viewer more befuddled than amused. 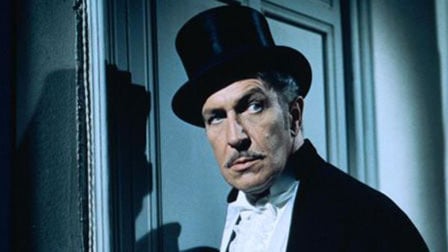 Again this was another film I was really looking forward to watching, as it’s a rare one which has never really aired in the UK before. However, due to a pretty sedate pace for an action thriller, some very clunky dialogue, characters you don’t really care about – including a leading man who’s just plain dull, and some unnecessary padding (did we really need the mud wrestling scene?), I must admit I kind of lost interest about half way through.

On the plus side there are some nicely shot, cool locations in this one; some sexy women dressed in not very much (and a couple of them try to escape by shinnying down a drainpipe in their night attire); Vincent Price is always good value and it does pick up pace a little towards the end, but all this is too little really to save this film from a pretty average rating.

It’s a shame really as this one had a lot of potential and it should have been a far more interesting watch than it was. We’ve come along way, from this… to Taken! Far too many scenes out-stay their welcome, it’s overly talky, the death and fight scenes are pretty boring (I’m not sure why this is rated 15), and some of the acting is amateur.

House of 1,000 Dolls is really one for Price completists only or for those who quite like their exploitation pictures safe, which is a bit of an oxy-moron!

Mediumrare Entertainment has just released House of 1,000 Dolls on DVD, so keep a look out for it, if you fancy watching a bit of fairly bland Eurotrash or is that Eurotosh!

Also included on the disc is a slideshow of 12 black & white production photos. Not much to get excited about there then either!