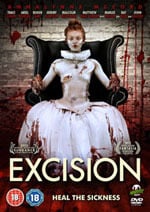 Excision is an interesting and quite different film, you could be forgiven for thinking it is a pure gore fest, when actually it’s not.

Having said I would watch Excision I was then a little reluctant. Not being a big fan of out and out gore I wondered what I had let myself in for. A friend tried to reassure me, ‘have you seen Heathers?’ he asked. I said I had and that I liked it. He assured me that, in that case, I would like Excision. I have to say that he is right.

Excision does remind me a lot of Heathers in fact. It’s the story of Pauline, played by the excellent AnnaLynne McCord, who is a rather disturbed teenager obsessed with surgery and blood, lots of blood. Pauline is also just a tad defunctional. She has lank, greasy hair, lots of spots, walks with hunched shoulders and has all the attitude you expect from teenagers. Pauline has a sister, Grace (Ariel Winter), who has cystic fibrosis and may need a lung transplant, something Pauline is fascinated with.

After Pauline the next best character has to be her long-suffering mum Phyllis, who is played by the equally excellent Traci Lords. Her character has an equal amount of matriarchal dominance and love for her two girls; one of whom may die very young. Phyllis clearly wears both the trousers and skirt in the family and tries to keep the house going whilst also trying to feminise the reluctant Pauline. The girls’ dad (Roger Bart) is a wet blanket and also serves to annoy Phyllis and Pauline at different times.

As I’ve said, Pauline has something of a fascination for blood and this is shown in a number of dreams that she has. These include her climbing into baths of blood and having her own severed head pulled out of a chest cavity. 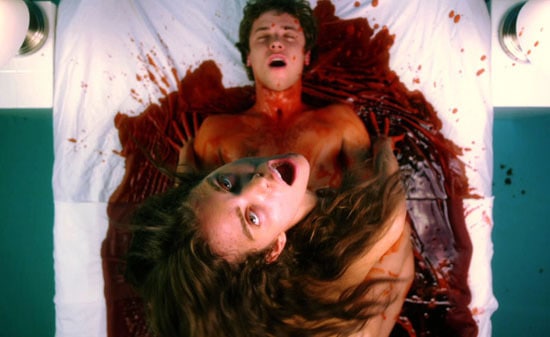 Given my reservations about the film I was interested to see where it went and what happened to Pauline and her family. I won’t give away the ending, all I would say it’s worth waiting for. Not that you really have to wait long as the film is only 81 minutes long. This feels about right as it has done and said just about everything it needs to by then.

Excision also has a couple of rather stellar cameos in the form of Malcolm McDowell as Pauline’s maths teacher and the always creepy Ray Wise as the school principal. Part of me would have liked to see more of these characters, but that would have probably altered the balance of the film, so their involvement is just about right.

If you like some teen-angst, and who doesn’t, then Excision is an excellent addition to the genre. It’s interestingly wacky with a great script and acting. I do worry for the state of mind for the writer Richard Bates Jr, who also sat in the director’s chair though. I wouldn’t be surprised if we see a lot more from him though.

Excision isn’t an all out gore fest, it’s a clever film that gets inside the weird mind of one messed up teenager. Just don’t watch it whilst you’re eating.

Excision is out now on Blu-Ray and DVD, released by Monster Pictures. Both editions feature an audio commentary and theatrical trailer.