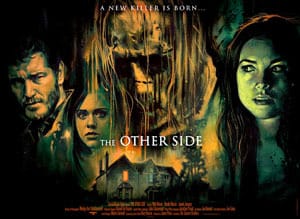 A young woman, Sophie, arrives at a farmhouse and says that she’s ‘here for the baby’. The young couple that live at the house invite her in and she stays the night. When she goes downstairs in the middle of the night for some water she hears a gun shot and is told by the woman not to worry, it’s probably just James, her partner. Sophie returns to her bedroom while the other woman, Rachel, goes looking for James. As Rachel nears an abandoned van she senses all is not well. Sophie gets dressed and, as she makes it to the front door, she sees a scary figure and runs back upstairs and hides in a walk-in closet with the baby. All sorts of gruesomeness follows…

Now I’m not going to reveal any more of the plot ‘cause I don’t want to spoil it for you. However, if you’ve seen Switchblade Romance you probably already know how this ends. I’m guessing the Santoro brothers, whose maybe not-so-original-story this is based on, have seen it too.

Don’t get me wrong, I quite enjoyed The Other Side – it’s certainly well made and manages to keep the viewer’s attention, but I guessed what was going to happen pretty early on, which kind of made the rest of it pretty redundant. The film is well shot and, aside from a couple of confusing edits and a couple of unanswered questions, it holds together quite well. The level of acting is pretty good and I liked the comedy cops who had all the best lines. Plus the ‘dead head’ psycho make-up was excellent and pretty creepy.

It strikes me that there are a lot of talented people behind this 20 minute short, but not enough of that talent was put into writing the script, which was too derivative of the aforementioned French film to really make an impact. Still it’s worth checking out, if you like your psychological horror.