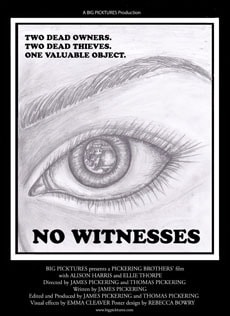 No Witnesses basically falls into the same category as Wes Craven’s The People Under the Stairs, in that one set of criminals put themselves in a dangerous predicament by being in the wrong place at the wrong time whilst they themselves are committing a lesser crime.

In this seven minute short two young female burglars break into a house and very quickly realise that all is not well when they come across a couple of bodies in the house they’ve chosen to burgle. As they stand around trying to decide what to do, whether to report the bodies to the authorities or whether to just split and keep schtum, the killer returns to the house.

I think the pleasure you’ll get from this film will depend on whether you are happy to go along with the idea that two felons would stand around arguing with each other about the morality of reporting the bodies or not, long enough for the killer to return to allow the final pay-off to happen. I personally think it’s unlikely they would, but these two burglars look too young and too innocent to steal a chocolate bar from their local corner shop, let alone break into a house! 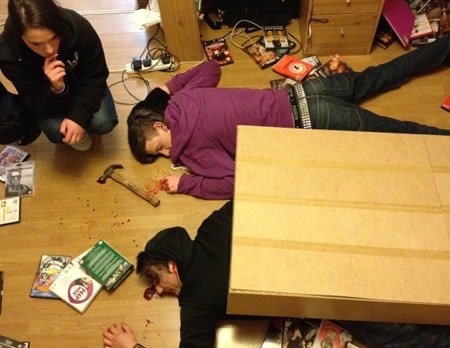 And I think this is the film’s main problem – because of the casting the film comes across as a decent student project rather than a serious film, one which might get entered into film festivals and the like. I just didn’t buy either of the girls as felons.

However, on a more positive note the film is pretty well put together, some of the dialogue is quite funny (my favourite line was “Quit fuckin’ and get lookin’!”) and I liked the printed captions about each of the film’s characters as a way of introducing them. While not an original idea the captions were all, in themselves, quite funny and added to the film. I also liked the thought bubbles emanating from people’s heads. The sound quality was reasonable and the soundtrack reminded me a little of the theme from Get Carter – not a bad thing.

I think the filmmakers definitely have talent and I’d be interested in seeing what they come up with next. I just think that next time they’d be better off not casting their friends, but more established actors.