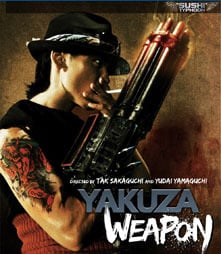 After spending the last couple of weeks watching and reviewing Mizoguchi films and Mark Cousins’ Story of Film I’m heading right over to the other side of the spectrum by covering the latest Japanese splatter-comedy offering, Yakuza Weapon. The star (Tak Sakaguchi) and writer (Yûdai Yamaguchi) of cult classic Versus join forces behind the camera after working together on Battlefield Baseball to co-direct this blood-soaked action comedy for specialist production company Sushi Typhoon (Cold Fish, Helldriver etc.).

Ex-Yakuza Shozo (Tak Sakaguchi himself) discovers that his gang-boss father has been murdered and heads back home to find the culprit. When he returns he discovers that his father’s right-hand man Kurawaki (Shingo Tsurumi) was to blame and has ruthlessly taken over the business. Shozo of course heads off to take revenge, but an epic battle results in both of them being mutilated. A secret Japanese governmental agency who have their eye on Kurawaki then step in, kitting out Shozo’s missing arm and leg with a high powered mini-gun and rocket launcher, turning him into the Yakuza Weapon. Kurawaki meanwhile, takes it upon himself to build an army of super soldiers to get his own revenge, including turning Shozo’s former friend Tetsu against him. 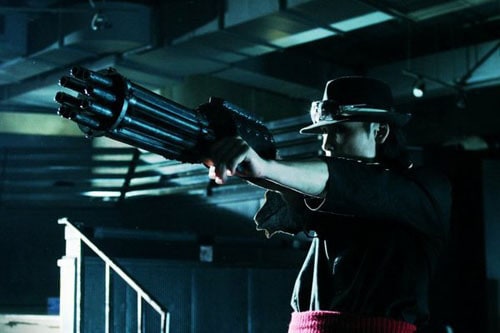 It took me a while to get into this one. Hastily squeezing the film in before I had to go somewhere didn’t help, but I’m also getting a little tired of this sub-genre of crazy Japanese splatter-fests. For me they need to really go all out to impress or at least keep things well paced and short. Helldriver for instance had some inspired moments, but became very repetitive and drawn-out by the end. Yakuza Weapon had the opposite effect though. Playing more with the action genre and less with the gore/horror aspects, the film just didn’t seem to be anything special in the first half, but got a lot more entertaining towards the end.

It still never went far enough to warrant a recommendation though. I liked that the film didn’t rely too much on gore as its selling point as I’m more of an action fan anyway, but the action was pretty uninspired for the most part and the humour that it wanted to rely on was too childish for me. However, the final third did offer up a couple of eye-opening scenes that were a lot of fun. First up was a fight scene done in one insanely long take that came out of nowhere (most of the other fights are quick-cutting). Although the choreography wasn’t quite as intricate as in the famous long-take in Warrior King (a.k.a. Tom-Yum-Goong), the actual take length may rival it and it certainly made me sit up and take notice of the film. Not long after this the film then lays its ‘bat-shit-crazy trump card’ when Tetsu arrives with a super-weapon made out of the naked body of his dead sister!? It’s not as sick as it sounds, but I did find it very funny, as base as it is. Also in the film’s climactic scenes is an interesting sequence where the action plays out in colourful silhouette which is a nice touch. 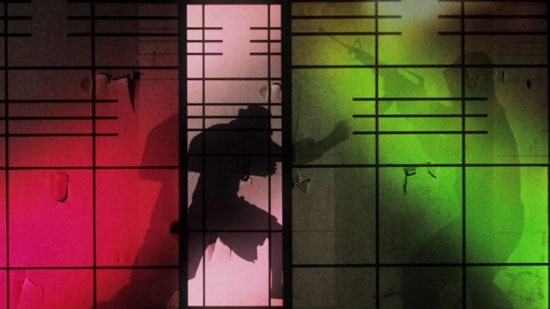 On top of those standout scenes, the film is quite evenly paced and the action more varied than in Versus, which I always found slightly disappointing due to its bloated running time and repetitive action scenes. It doesn’t have the flair or style of that film though and coming over a decade later it doesn’t have anywhere near the same impact either. Because of this, Yakuza Weapon is a fun trashy genre film, but is never going to be remembered as any sort of a ‘cult classic’.

Yakuza Weapon is released on DVD & Blu-Ray by Bounty Films and distributed in the UK by Eureka Entertainment on 7th May. Picture and sound quality is great on the Blu-Ray, although I find low budget, digitally shot films like this look cheaper on Blu-Ray as the pin-sharp picture shows more flaws in the effects, costumes, sets etc.

The discs are loaded with extras. You get a bunch of deleted and extended scenes, a fun making of documentary, a short film – Takuzo’s Weapon, Toki’s Wedding – an odd little film about Tak Sakaguchi going to his sister’s wedding, the full Tower of Kurawaki video, an opening day stage greeting, Dream Jumbo Talkshow featuring interviews with the filmmakers, a trailer and an isolated music track. So pretty much everything fans of the film could possibly want.