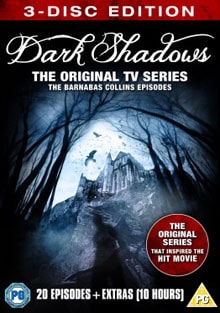 Dark Shadows was a TV soap opera which ran from 1966 – 1971 with a supernatural theme. With it’s recent rise to the public consciousness due to the imminent release of Tim Burton’s big film adaptation this is a timely issuing of some episodes that showcase the character that saved the show, Barnabas Collins (Jonathan Frid).

It’s worth watching the introduction on disc 1 first if you haven’t seen any of this show before; it introduces Victoria Winters (Alexandra Moltke) and the other members of the Collins family, who reside on top of Widows’ Hill in a house called Collinwood in Collinsport, Maine. Victoria was orphaned, and she came to Collinwood to find out more about her eerie past, it gives you a catch up of a year’s worth of goings on (which doesn’t take long at all). From the look of the introduction frankly the story before Barnabas Collins turns up looked a bit blah so it’s nice to just have the 18 highlighted episodes on this 3 disc collection to help you cut out a lot of the slack and get straight to the good stuff. Barnabas Collins appeared 1 year into the run of this daytime soap and the episodes in this set are from April 1967 when Barnabas first appears. There were supernatural elements before the vampire was introduced but him his appearance really turned the show around and led to more outrageous storylines and a bigger fan base.

Dark Shadows is renowned for the shaky sets, shoddy camera work and dodgy sound which all add to the ambience of this sometimes hilarious show. The pace is not what you might be used to and for us modern viewers who have watched everything from Buffy to the Twilight films it can feel painfully slow at times. There are often errors – dialogue messed up on front of your eyes, mic in shot, out of focus cameras, watching actors reading off of cue cards etc. – but it’s just part of the charm. The eerie and quite brilliant theme tune composed by Bob Cobert will stay with you long after you have finished watching the shows. 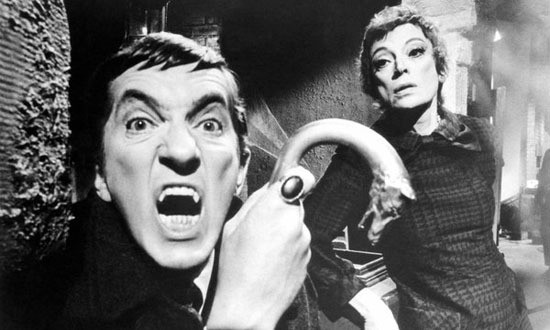 There are various levels of acting ability on show here but Barnabas’ main minion and sidekick Willie Loomis (John Karlen) does a great line in being scared out of his mind a lot of the time and his reaction to Barnabas helps instil a bit of fear for this overly polite and slightly pathetic figure.

Disc 2 is a better watch in terms of story and you start to really enjoy seeing more of Barnabas. Every line that Frid delivers is full of portent (not only because he is desperately trying to remember them, not always successfully) and whenever he appears you are glued to his every move. With Frid’s very recent sad demise (although he managed a cameo in Tim Burton’s upcoming film adaptation) this is a somewhat poignant viewing and certainly his most famous role. In his interview on this disc Frid reveals how this was his first TV show and his nerves translated very well into the character of Barnabas. 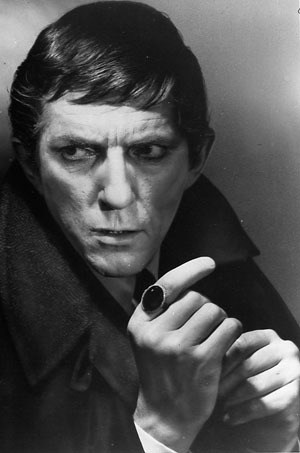 Disc 3 has some great extras and the behind the scenes section (which is a tad dated now) shows many tantalising glimpses of later Dark Shadows shows in colour and with even more outrageous characters and plots; guaranteed to make you want to see more. Some of the cast reveal how and why they looked so scared and true to character (short sightedness being one reason as the cast were scared of walking into sets and couldn’t read any cue cards). It’s also interesting to see the cast members that passed through Dark Shadows’ doors with notable faces from big 80s TV shows and beyond.

The Inside Dark Shadows featurette is good value with Dan Curtis the show’s creator talking about why he introduced the vampire character of Barnabas and how he developed ideas. He conjectures that it was the love stories that kept the series popular and the vulnerability of the reluctant vampire. Vulnerable vampire Barnabas Collins is undoubtedly the star and is like the first Edward Cullen; a brooding but sensitive monster. One can only hope that Jonny Depp brings more of Edward Scissorhands and less of Jack Sparrow in his turn at this role.

With its melodramatic performances, atmospheric interiors and creepy music you will find yourself laughing at Dark Shadows whilst being a bit scared at this curious mix of Crossroads and Supernatural. Overall this is an enjoyable package and a bit of TV history; a brave forerunner of Buffy, Supernatural, Grimm et al and hats off to what was a ground-breaking show at the time. It is probably best enjoyed late at night when you’ve had a few beers but this trailblazing show is worth a watch.