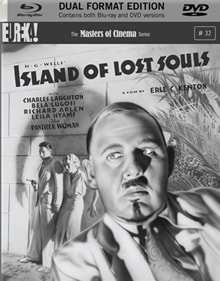 H.G. Wells’ Island of Dr. Moreau is a book that has had a troubled history when it comes to screen adaptations. Versions made in the 70’s and 90’s both had difficult productions – Richard Stanley’s rising career was pretty much killed due to the latter. The first film to tackle the subject matter though was Erle C. Kenton’s 1932 film Island of Lost Souls. Why the makers chose not to share its title with the extremely popular novel is rather baffling, and although the film’s production was fairly smooth, its subsequent release certainly wasn’t. The film was caught up in a campaign to ban horror films in the mid-thirties and between 1936-8 all horror films were hidden from public view and Island of Lost Souls, deemed especially vile, remained banned until 1958. Troubles aside, Kenton’s version of the classic tale is thought by most to be the strongest adaptation to date. 80 years later, does the work still hold up though? 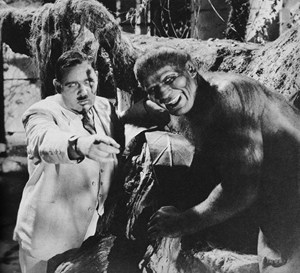 For those of you unfamiliar with the source material, Island of Lost Souls begins with shipwreck survivor Edward Parker (Richard Arlen) being taken aboard a ship delivering exotic animals to the mysterious island of Dr. Moreau (Charles Laughton). An unfortunate incident with the ship’s captain puts Parker on a small boat heading for this island. When he arrives, the doctor sees his new visitor as an ideal specimen for his experiments. Moreau has been developing ways of turning animals into human hybrids and sees a prime male human as a way to test his one female experiment’s instincts for love and lust.

Island of Lost Souls isn’t one of the most renowned horror classics of the era, being overshadowed by the likes of Universal’s Dracula and Frankenstein movies. It is still an entertaining and effective old fashioned chiller though. Running at a lean 71 minutes, the film rockets through its narrative, not wasting any time along the way. This straight to the point approach is rare these days and its refreshing to see in genre films like this. The themes of ‘toying with nature’ are actually rather prescient too – what once was considered throwaway science fiction is now becoming reality, albeit in a less bombastic sense.

It is still rather creepy too, with an expressionistic/noirish use of shadows (before film noir took off) and fairly effective creature effects. These don’t look particularly realistic, but have a patchwork style that adds to the disturbing nature of Moreau’s experiments. In the finale, their mob attacks are particularly troubling to see too, even though the viewer can share a certain empathy with their plight. The prime reason for the film’s retained horror though is through the performance of Charles Laughton. Most of the cast are rather wooden, but Laughton delivers a creepily effeminate yet quietly powerful portrayal of the cruel genius. Without his anchoring presence the film would certainly not be as effective as it is. Horror favourite of the time Bela Lugosi shows up too, but only in a minor role as the leader of the ‘natives’, which he still makes the most of. Funnily enough, although the two legends are often in the same scenes, Lugosi was only drafted in at the end of the shoot as a name for the posters and the two never physically worked together. Clever editing was used to make it seem like they were sharing the scene. 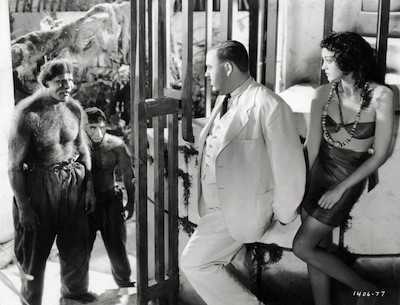 It’s not a perfect film though. Much of the film has dated. The dialogue and bulk of the performances aren’t particularly noteworthy, although there are a few quotable lines – “what is the law?” and the payoff of “don’t look back” for instance. What struck me most of all though was the lack of sound and music. A score is only used very briefly over the opening credits and very final moments of the film. This quiet lack of music adds to the unsettling nature at times, but also hinders any drama and tension. It’s a technique that Hitchcock used in The Birds, but there his ingenious use of bird noises and sound effects acted as an alternative soundtrack. Here very few sound effects are used at all and much of the film is pretty much silent away from the dialogue, which makes it feel unfinished more than anything. I guess the grand scores were still in their infancy back then, but it’s the first time the issue has bothered me in a film.

Overall it’s hard to knock the film though. It’s a lean, entertaining, yet dark affair that didn’t make a huge impact on me, but is certainly something I’d like to watch again.

Island of Lost Souls is out on the 28th May on Dual Format Blu-Ray & DVD (as well as a swanky steelbook edition) as part of Eureka’s Masters of Cinema series. The picture and sound quality isn’t as strong as on some of their previous releases, with a soft, hazy, ‘haloed’ image at times and a bit of hiss on the soundtrack. Reading the transfer notes in the booklet it seems no negatives were available though, so I imagine this was as good as they could get the film from the surviving prints. It’s still head and shoulders above most releases of films of this era, but Masters of Cinema have their own extraordinary standards.

In terms of extra features, we get a video piece where horror critic and historian Jonathan Rigby discusses the film and its source novel. We also get an interesting, but rather gushing interview with Simon Callow who discusses Laughton’s work on the film (Callow has written an book on the actor). On top of these we get the original theatrical trailer.

Being a Masters of Cinema release, we also get a 17-page booklet which contains a fascinating look at the background of the film by horror expert Kim Newman. Included in this are a host of promotional and behind the scenes stills too which are great to see.