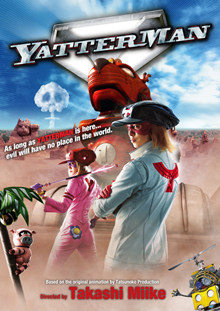 Like Crows Zero, which I reviewed recently, Yatterman is another example of Takashi Miike’s more commercial work designed for a younger audience that rarely travels over to the West. In my opinion, this is one example that probably should have stayed where it was.

Based on the 70’s anime series of the same name, which was brought back in Japan about 4 years ago, Yatterman is a live-action cartoon that ignores the trend of series adaptations to present an origin story and instead throws you right into the world well established by the TV series (which I am not familiar with). As wacky as it comes across, the film’s story is actually pretty straight forward. Yatterman is a collective superhero made up of boyfriend and girlfriend Gan Takada (Yoshinori Chiba) and Ai-Chan (Saki Fukuda). They constantly do battle with the thieving Dorombo gang, consisting of the seductive Doronjo (Kyôko Fukada) and her two bumbling mechanic henchmen Tonzuraa (Kendô Kobayashi) and Boyacky (Katsuhisa Namase). Taking orders from the King of Thieves, the Dorombo gang hunt for the broken pieces of a magic skull which is causing things to disappear. Yatterman, of course, must stop them and using their wealth of gadgets and a giant dog-shaped mecha they will fight every crazy invention the Dorombos throw at them. 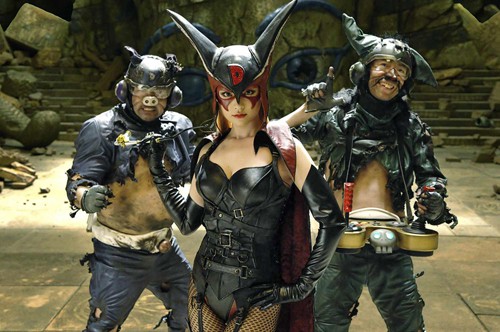 Maybe something was lost in translation or maybe it’s because I don’t know the series, but I really didn’t get into this at all. I also struggled to see who this film is aimed at in general. It’s presented like a kids TV show with bright bold colours, goofy humour and (terrible) song and dance sequences, but there is a lot of adult humour in there too, resulting in a 15 certificate here in the UK. There are a lot of sexually themed gags including robot breasts that fire machine guns and emit rockets when rubbed as well as a bizarre sequence of mecha-bestiality!

Regardless of who the humour was aimed at, none of it worked for me. Most of it consists of a lot of mugging for the camera and the dirty jokes mentioned above. There are a few self-referential gags which raise the tone a little, but not nearly enough to lift the film beyond its base level.

I’ve seen a lot of Asian films with humour that doesn’t connect with me so I wasn’t overly bothered by this aspect, but what troubled me most was that nothing else connected. The core narrative is too basic to be of interest, the romantic subplots are rather feeble and the overall structure is incredibly repetitive, consisting of a message telling us where the next skull piece is, both teams tooling up, then their coming together for a CGI mecha-brawl. I imagine this is the structure the TV episodes shared, but in a two-hour film it makes it feel like you’re watching 4 shows back to back rather than a standalone film. It also means there’s a distinct lack of drama. Scenes just roll out one by one and I never cared what the outcome would be. 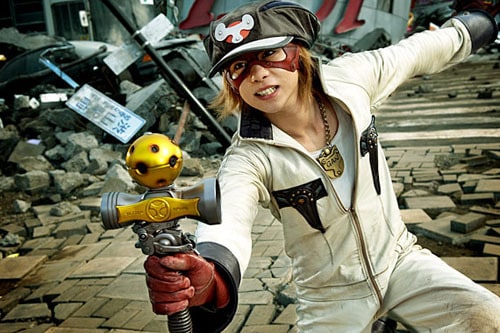 It’s not all bad I guess. The production design is impressive if a little cheap and tacky at times. It’s a colourful affair which looks great on Blu-Ray, and the detail that goes into some of the (digitally enhanced) sets such as the huge clock hall is impressive. Some of the surreal imagery and overall wackiness is occasionally endearing too, but there’s really not enough going on under the shiny veneer to keep you interested.

Fans of the series may disagree but I found this to be an overlong, tedious, lifeless affair that was nice to look at, but nothing more.

Yatterman is released on DVD & Blu-Ray in the UK by Eureka Entertainment on 21st May. Picture and sound quality is great on the Blu-Ray, although the sharp picture makes everything look that bit more fake and tacky.

There are quite a few features on the disc. You get the standard trailer and an OTT promo made for Cannes as well as a bunch of stills to look at. More notable are two featurettes. One is a very basic affair looking at the shoot itself that is raw, but effective, giving viewers a glimpse at the shooting process of such an effects driven film. The second featurette looks at the production design and costumes, which is cheesily presented but still interesting to see the detail that went into the look of the film. Added to these are 3 interviews, one with Miike, another with star Yoshinori Chiba and another with the man behind the original series Tatsuo Yoshida. These are short and basically presented, but nice additions to the set.