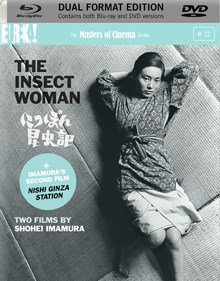 Masters of Cinema continue to release the early work of the Japanese New Wave pioneer Shôhei Imamura, with a dual format Blu-Ray & DVD edition of Insect Woman, considered one of his earliest masterpieces (alongside Pigs and Battleships from 1961). The film is also packaged with an earlier studio comedy, Nishi-Ginza Station (see below for a full review).

Insect Woman is a clear step, or rather leap, towards the work Imamura would produce later in his career. As he is famous for stating, he has always been “interested in the relationship of the lower part of the human body and the lower part of the social structure… I ask myself what differentiates humans from other animals.” Insect Woman makes this question clear from the outset by opening on a shot of an insect struggling up a hill in some sort of fruitless journey it seems programmed to do. The ensuing film mirrors this fruitless existence with the life story of Tome (Sachiko Hidari), the bastard child of a poor family. Shunned by her ineffectual mother and treated like livestock by most of her family, her only source of love comes from her simple-minded father/step-father Chuji (Kazuo Kitamura), with whom she shares a creepy relationship that veers on the incestuous. After having a bastard child of her own, Tome leaves for Tokyo to earn a living to pay for the child, who lives back home with Chuji. She soon moves from the factories to prostitution though and her downtrodden innocence gradually turns her into a hardened old woman who tries to manipulate others to her advantage but ends up causing her own undoing. In the end the film comes full circle as her daughter Nobuko (Jitsuko Yoshimura) succumbs to some of the same vices as her mother and gets pregnant with possibly another bastard child. In the final shot we see Tome struggling up a dirt path on her way to see her, mimicking the insect’s struggle we opened with. 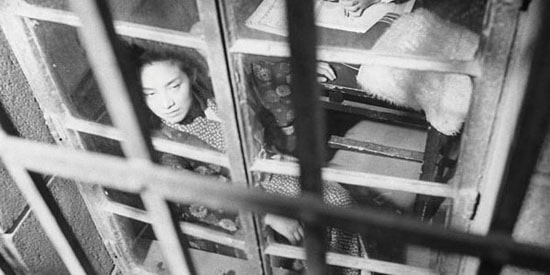 It’s certainly not a light film, as the description above makes clear, but it’s not a grimly depressing experience either. Imamura’s style, which he stuck with long after Insect Woman, is one of observation. Shots are often wide or from a distance, keeping the characters from getting too close to the viewer, figuratively speaking. Imamura never overly dramatises anything or milks any of the bleak situations. He seems intent on showing all the difficulties life has to offer, but doesn’t want the viewer to necessarily feel sorry for his characters or sympathise with them, he’s merely interested in watching and displaying them. This makes his films peculiar experiences, but fascinating ones. His self-professed ‘messy’ style of narratives can be hard to stomach too, but once you’ve seen a few of his films they become easier to digest and I find it refreshing to see a film that isn’t tied down to anything and is free to roam where it pleases. Somehow Imamura manages to do this without meandering, which is quite a skill. Even at a hefty 123 minutes, the film is fairly pacey considering the lack of a strong narrative drive. The first hour in particular flies by as most of Tome’s youth is told through short, sharp scenes and montages. The latter half is less focussed and snappy, but nonetheless strong.

I found I didn’t enjoy Insect Woman as much as a couple of Imamura’s other films, but as an indicator of his skill and what was to follow it’s very powerful. His handling of mis-en-scene in particular is phenomenal here. As mentioned previously, he makes frequent use of wide shots from a distance to his subjects. These wide frames are meticulously framed, but filled with action, generally busy and brimming with life so never seeming overly staged or coldly calculated. The black and white photography is grimy and rough on the surface, but through this beautiful use of framing and some great use of low key and seemingly natural lighting, it always looks good in it’s own unique way.

Like I’ve mentioned in my review for previous Imamura films, I find it hard to pin down exactly why I really like them, but somewhere in amongst his stubborn insistence on not following all of the cinematic ‘rules’ and his messy yet masterful handling of the medium, I remain engrossed and intrigued with every title of his I watch.

Nishi-Ginza Station is an odd addition to Imamura’s canon of work. Released in the earliest stages of his career, the film was forced on him by the studio Nikkatsu, who wanted a vehicle for the singer of the film’s title song, Frank Nagai. Unwilling to go along with this, Imamura tried to talk them out of it, but instead Nikkatsu struck a middle ground by saying he could do whatever he wanted with the film so long as he got the song in there somewhere. The rebellious director took this chance to make a slightly snide and mischievous take on the kind of studio fluff that was churned out at the time.

Nishi-Ginza Station is not thought of highly by Imamura and even Tony Rayns lays into the film in the Blu-Ray’s booklet, but I actually quite enjoyed it. Clearly the film meant very little to the director, but he does seem to be having fun with the material and although it’s nothing like his later work, it’s still got enough wit and invention to make it an entertaining watch. 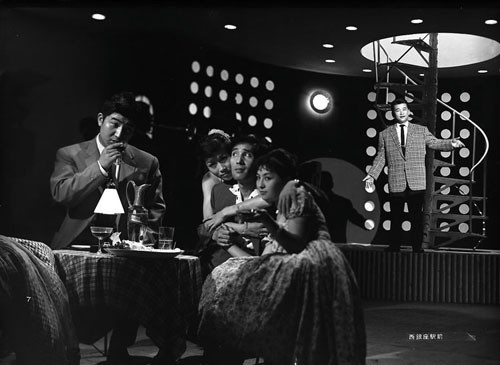 The film is very short (only 52 minutes) and tells the simple story of a downtrodden husband Ôyama Jutarô (Yanagizawa Shin’ichi) whose wife goes away for a week with the kids, leaving him finally on his own to enjoy a short period of freedom. His friend talks him into trying to have a brief fling while he can and Jutarô nervously sets his sights on the girl in the shop next door (he works in a pharmacy, which his wife runs). They end up going off on a bit of an adventure together, but he remains faithful, mainly because he finds out that his wife had paid the girl to spy on him. So in the end he’s back where he started and our narrator (the intended star, Nagai) lets the audience decide whether it’s for the best or not.

It’s pure fluff, but I enjoyed it. The mildly zany and occasionally base humour worked well for me, despite its age, and there are some nice directorial touches too. I liked the way the narrator kept turning up in various places as different characters and there are a surprising amount of postmodern gags spread throughout for a film from the 50’s. It has the playfulness and energy of early Godard, minus the poetry and politics. Unfortunately much of this energy fizzles out by the last 20 minutes though and you remember that what you’re watching is pretty light and lacking in substance. So all in all it’s a surprisingly enjoyable addition to the Blu-Ray/DVD set and I’m glad it’s seen the light of day after vanishing into obscurity, but it’s not going to set the world on fire and greatly lacks the impact of Imamura’s later work.

Insect Woman & Nishi-Ginza Station are out now together in one set on Dual Format Blu-Ray & DVD, released by Eureka as part of their Masters of Cinema Series. The picture quality isn’t quite as strong as some of their previous releases, but it’s still a hell of a lot better than most re-releases of films of the era. It’s mainly just the darker shots that let down Insect Woman where the dense blacks go a bit glitchy. It might have been my TV just struggling on some very dark shots, but I’ve seen other films that have managed more effectively before. It still looks crisp and clear for the most part though and is of course shown in it’s intended aspect ratio etc. so I can’t really complain. I think other Masters of Cinema releases, especially the recent work they’ve done with the Universal back catalogue, has made my standards difficult to match.

Features-wise there isn’t much, just a video conversation between Imamura and critic Tadao Sato, unless you count the inclusion of Nishi-Ginza Station as an extra feature. Personally I think it’s strong enough to stand on it’s own, but it is marketed as a secondary element to the package. With it’s short length it works well alongside another film like this though without making you feel a bit shortchanged.

In keeping with tradition, there is also a fascinating booklet provided with the films in which Tony Rayns discusses the two films at length.